Minnesota saw a surge of deaths in 2017 caused by the powerful synthetic opioid fentanyl, according to a preliminary analysis of death records by the Minnesota Department of Health (MDH).

“This dramatic increase shows that the opioid epidemic in Minnesota has also become a fentanyl public health crisis,” said Minnesota Health Commissioner Jan Malcolm. “These data confirm that Minnesotans addicted to opioids may unknowingly be exposing themselves to far greater and more deadly risks than they know. It is more important than ever for us to support Minnesotans in their efforts to seek help and treatment.”

The growing impact of fentanyl is so great that it is outweighing progress in other areas, such as decreases in prescription opioid and heroin deaths, resulting in a total 3 percent increase in deaths from 675 in 2016 to 694 in 2017, according to preliminary numbers. These numbers are subject to change as MDH researchers work further to confirm their accuracy.

Since 2000, commonly prescribed opioids have been involved in the greatest number of drug overdose death. The numbers of deaths has remained stable over the past five years. Since 2011, heroin deaths increased rapidly, but showed a preliminary 29 percent decrease from 2016 to 2017.

Data contained within this report are preliminary and likely to change when finalized. The results are indicative, not definitive, of the final 2017 drug overdose deaths. A final report is anticipated by September 2018. 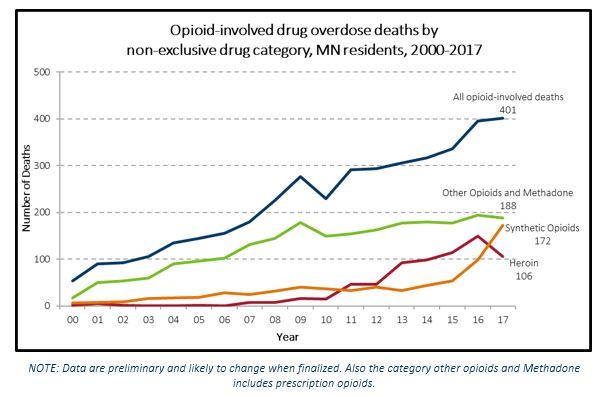 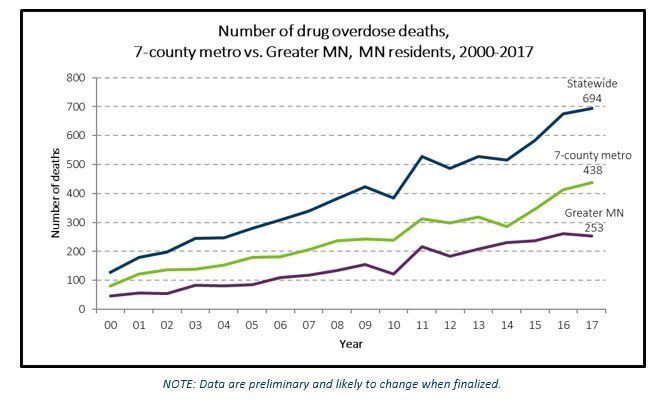 Visit the Opioid Dashboard to see the preliminary data brief and to learn more about emergency response, lifesaving naloxone, treatment, and preventing the demand for drugs. Data contained within this report are preliminary and likely to change when finalized. The results are indicative, not definitive, of the final 2017 drug overdose deaths. A final report is anticipated by September 2018.