Concerning and potentially unsustainable doubling of costs expected in 10 years

Health care spending for Minnesota residents reached $47.1 billion in 2016 and grew at one of the lowest rates in the past 10 years, according to a new report from the Minnesota Department of Health.

This latest MDH report tracks spending trends by consumers, private health insurance, state public programs and Medicare. The slower spending growth in 2016 was driven by reductions in public program spending for beneficiaries of Minnesota Health Care Programs, like Medical Assistance. The spending reduction resulted from changes in how the Minnesota Department of Human Services negotiated payments to health plans. Had public program spending continued its 2015 trend, overall spending on health care in Minnesota would have increased more than 5 percent in 2016, with an additional $1.6 billion devoted to health care. Private health insurance spending grew 6.1 percent and Medicare spending grew 4.9 percent in 2016. 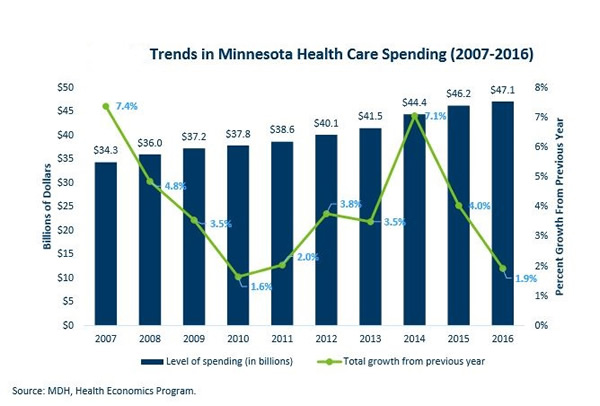 Despite this one-year reduction in public spending, the report’s long-term projections suggest health care spending over the next decade will double, reaching $94.2 billion. This means Minnesota is on track to spend $1 out of every $6 generated by the state’s economy on health care. 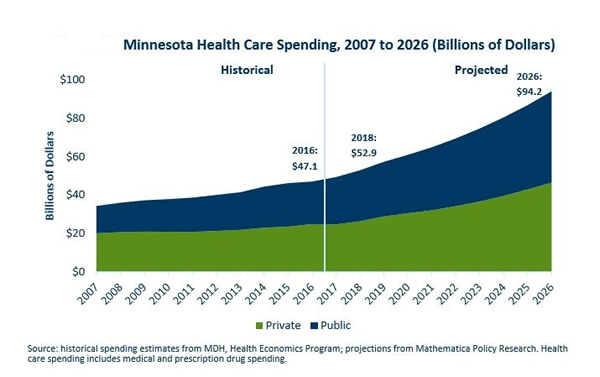 “Minnesota had success in controlling public spending in 2016 thanks to innovations and some new approaches,” said Minnesota Commissioner of Health Jan Malcolm. “But the long-term outlook shows big financial challenges ahead for individuals, employers and government. We must do more to limit spending increases, and that will mean a need for continued innovations in public policy approaches, marketplace solutions – and above all a sharpened focus on preventing disease. It’s far less expensive to prevent diabetes, cancer and other chronic diseases than it is to treat them after they have developed.”

The report further highlighted trends such as the rapid increase in out-of-pocket spending for people with private coverage and the increased role of public coverage. In fact, according to MDH analysis 2018 could prove to be the turning point where public spending draws even with private spending for the first time. Retail drug spending growth wasn’t much of a cost factor in 2016, increasing by 1 percent. However, drug spending continues to take on a bigger role when drug spending administered in office settings and in hospitals is included.

“It is encouraging that overall health care spending growth in Minnesota remains modest,” said Stefan Gildemeister, the state health economist. “But what this high-level trend masks is the sizable shift in responsibility for the cost of care that privately insured Minnesotans experienced. Out-of-pocket spending in the state, which includes spending on deductibles, copayments and other forms of cost-sharing, grew at double the rate of total spending between 2002 and 2016. For many Minnesotans, that is causing very real pain.”