Preliminary statewide data show a decrease in overall drug overdose deaths in Minnesota, with deaths dropping 17% from 733 in 2017 to 607 in 2018. While promising, overdose rates remain at historic highs and indicate the amount of work still needed in prevention and treatment of substance use disorder.

The preliminary data released by the Minnesota Department of Health (MDH) shows deaths related to synthetic opioids, primarily illicitly manufactured fentanyl, continued to increase. A vast majority of the synthetic opioid deaths involved fentanyl. Of the 195 deaths, 184 (94%) had fentanyl listed as contributing to the death on the death certificate. Synthetic opioids are now involved in the greatest number of overdose deaths for all drugs, surpassing commonly prescribed opioids.

“It’s encouraging to see this turn-around in the trend in 2018 as Minnesota has implemented a broad range of efforts to prevent opioid misuse and combat the overdose crisis,” said Minnesota Commissioner of Health Jan Malcolm. “This is good news, but we want to emphasize that this is still preliminary data and that overdose deaths continue to remain at historic highs. There is still much work that needs to be done to end this crisis and mitigate its effects.”

This decrease is just the second one seen since 2000 in a rising trend of opioid-involved deaths, if the preliminary data does not substantially change. MDH’s final drug overdose numbers tend to increase as the health department receives additional death certificates for Minnesota residents who died of opioid-involved overdoses in other states. For example, last year Minnesota’s preliminary count rose from 694 in May to 733 in the fall. 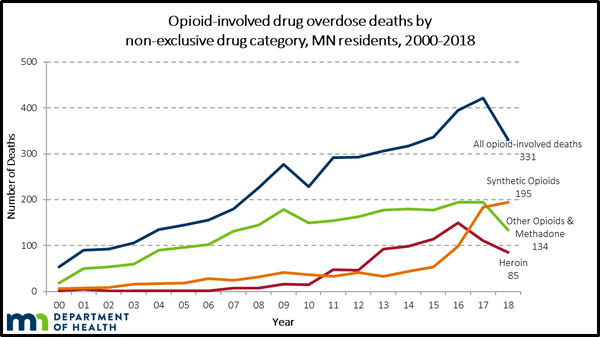 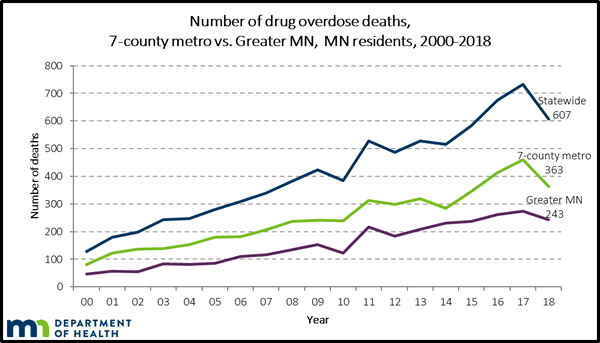 Data contained within this report are preliminary and may change as they are finalized. A final report is anticipated this fall.

Minnesota has several initiatives underway to address opioid misuse, such as increasing access to the overdose-reversal drug naloxone (brand name Narcan®). The state’s Opioid Prescribing Work Group created opioid prescribing guidelines for Minnesota. More than 16,000 health care providers serving Minnesotans on Medicaid and MinnesotaCare are receiving reports comparing their opioid prescribing rates to those of their peers. Additionally, an upgrade of the Minnesota Prescription Monitoring Program will include alerts for prescribers about patients potentially misusing opioids.

The Minnesota Department of Human Services will also soon release State Opioid Response grants of $8.87 million per year for two years, which will fund naloxone distribution, expand treatment resources including medication assisted treatment and work to build the treatment workforce.

Human Services Commissioner Tony Lourey recognized the positive trend, but believes more work needs to be done. “Minnesota is working to end the opioid crisis by investing in a range of prevention, emergency response, treatment and recovery strategies,” Lourey said. “The decrease we’re seeing in opioid deaths tells us our approach is the right one. We must continue to help those who are struggling with addiction and stop the damaging effects illicit opioid use has on people, families and communities.”

The Minnesota Department of Public Safety Bureau of Criminal Apprehension (BCA) established the Minnesota Anti-Heroin Task Force in 2018 to help local agencies address the heroin crisis. It works to disrupt the flow of heroin into Minnesota and assists in overdose death investigations.  Legislation signed into law by Governor Walz includes an additional $1.3 million per year from the General Fund to support investigations of heroin and other drug crimes. It also enables the addition of six forensic scientists to reduce the current drug evidence turnaround time at the BCA lab. The BCA is also partnering with public health and public safety experts in a Drug Monitoring Initiative to better understand the trends, patterns and threat of illicit opioid use and provide information to make decisions about resources, initiatives and prevention efforts.

“Opioid abuse is stealing the lives of our friends, neighbors and loved ones every day in every corner of the state. It’s an epidemic that requires a comprehensive approach, because arrests alone won’t curb the problem in our communities,” said John Harrington, commissioner of the Minnesota Department of Public Safety. “While law enforcement agencies across the state are working hard to disrupt the supply of this poison in our communities, we also need to find ways to reduce the demand by connecting people with the resource they need to break free of addiction.”