Amid the backdrop of an ongoing national outbreak of severe lung injuries associated with vaping, new survey results released today show an alarming jump in the rate of teens vaping in Minnesota. In response, Governor Tim Walz is calling for an aggressive, multi-faceted campaign focused on youth education, outreach and tightening limits for accessing vaping products.

The survey also found Minnesota youth are ill-informed about the health risks of e-cigarettes with 76% of eleventh graders saying there is either no, slight or a moderate risk to using e-cigarettes. E-cigarette marketing efforts have included child-friendly flavorings and misinformation related to the safety of vaping products. 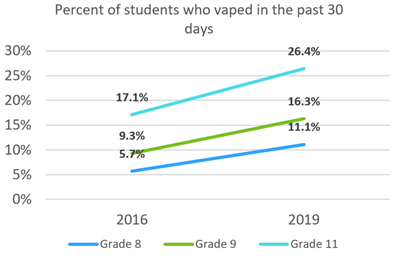 These survey results come to light at the same time the Minnesota Department of Health (MDH) and partners around the country are racing to determine the cause of severe lung injuries associated with vaping. The latest Minnesota count is now 55 confirmed or probable cases of vaping-related severe lung injuries, and one death. Nationwide, more than 800 cases have been reported to the Centers for Disease Control and Prevention.

“Vaping is a public health crisis for young Minnesotans, and it is critical that we act now to bring the rate down,” Governor Walz said. “As a teacher and as a father, I know the first step is making sure our young people understand the risks. That’s why I’ve directed our health and education commissioners to work together to get the word out to students, parents and school officials this month while also putting forward bold legislative policies to tackle this crisis head on. Our goal must be to make sure young people and the adults in their lives have the information, support, and resources to fight back against those profiting at the expense of our children’s health and well-being.”

“As the mom of a child with asthma and as someone who has advocated for children for my entire career, I am deeply concerned about the rising rates of vaping in our schools and the potential health risks for our future generation,” said Lieutenant Governor Peggy Flanagan. “Eighth graders don’t have lobbyists. It’s our responsibility as elected officials, advocates, and adults to fight back on their behalf.”

Governor Walz has directed the commissioners of health and education to work together to launch an aggressive outreach campaign to provide school officials with information and resources to help as they struggle with vaping in schools. This includes conducting informational briefings across the state as well as other activities to get information to parents, students and health care providers to make sure people understand the risks of vaping. This action builds on the departments’ previous work to prevent vaping through a variety of efforts, including a School E-cigarette Toolkit that provides resources for school staff working to address the use of vaping products in schools.

Meanwhile, Governor Walz has directed his Administration to determine a set of bold 2020 policy options to combat youth vaping. The list of legislative options under consideration includes: raising the statewide legal age for tobacco to 21; prohibiting the internet sale of tobacco products, e-cigarettes and vaping products; prohibiting the sale of all flavored nicotine and tobacco products; and providing authority for MDH to declare a public health emergency in critical situations.

“I have heard concerns about the impact of vaping in just about every school that I’ve visited,” said Minnesota Education Commissioner Mary Cathryn Ricker. “We will work together to combat this problem. That’s why the Minnesota Department of Education is partnering with Commissioner Malcolm and the Department of Health and working with students, parents, and educators to make sure they have access to the critical information and resources about the health risks, prevention strategies, and how to address the use of vaping in schools.”

The vaping rate information is one of several categories of information about student health generated by the Minnesota Student Survey, a voluntary, anonymous survey conducted every three years. It includes questions tailored for various grade levels regarding school climate, bullying, out-of-school activities, healthy eating, emotional health, substance use, connections with school and family, and other topics. State agencies use the survey data to identify important trends and efficiently target resources to improve the well-being of the state’s youth. The complete survey results will be released in the coming weeks.

The survey data show the challenges ahead for those seeking to limit youth vaping. Eleventh grade students responding to the survey said they got e-cigarettes in several ways, including getting products from friends (72% of respondents), getting someone else to buy them (22%), getting products at a vape shop (14%), and getting products on the Internet (10%). E-cigarettes contain nicotine, which is highly addictive and harmful to the adolescent brain. Nicotine can impact learning, memory and attention span, and contributes to future addiction to tobacco and other substances. E-cigarettes can also be used to vape other substances – including illegal THC products that have been associated with the Minnesota cases of severe lung injuries.

Research shows teens who try e-cigarettes are nearly four times as likely to start smoking cigarettes as teens who do not try them. Nicotine in e-cigarettes and other tobacco products can also prime the adolescent brain for addiction to tobacco and substances. The 2017 Minnesota Youth Tobacco Survey found that one in three high school students who used e-cigarettes reported trying the device with marijuana.

“The cases of severe lung injuries in Minnesota and other states show how dangerous vaping can be,” said Minnesota Health Commissioner Jan Malcolm. “However, this isn’t just about the lung injuries associated with vaping illegal THC. We should all be very alarmed by the increasing number of eighth graders who reported vaping, because we know that the earlier a person is exposed to nicotine, the greater their risk in terms of future brain development and addiction.”