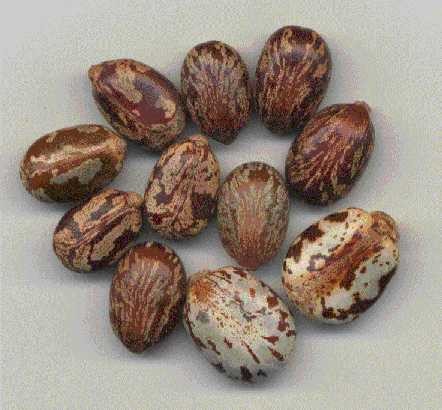 On this page:
What is ricin?
Can ricin poisoning be treated?
Can people be protected against ricin poisoning?
Can you get ricin poisoning from other people?
Why is ricin considered a possible terror weapon?
What should I do if I think I may have been exposed to ricin?

Ricin is a kind of poison. It comes from the beans of the castor plant, which are also used to make castor oil. It can be made as a liquid, a dry powder, or crystals.

It’s very unlikely that anyone would ever be poisoned with ricin by accident. It would only happen if someone used ricin on purpose – as a weapon.

Ricin can be used to poison people by putting it in food or water. If liquid or powdered ricin is released into the air, people could be poisoned by inhaling it. If it’s mixed with a solvent, it can be absorbed through the skin – although that’s probably the least likely way to be poisoned with ricin. It can also be used to poison an individual person by injecting it.

Ricin poisoning can cause death, but it isn’t always fatal. Symptoms depend on the amount of ricin, and how a person is exposed to it:

Can ricin poisoning be treated?

Right now, there is no antidote for ricin, but the symptoms of ricin poisoning can be treated. Treatment will depend on how the patient was exposed to the poison, but may include help in breathing, as well as fluids and medications given through a vein. People who survive more than five days have a good chance of recovering.

Can people be protected against ricin poisoning?

Right now there is no way to protect people, in advance, against the effects of ricin. The possibility of developing a vaccine is being studied.

Can you get ricin poisoning from other people?

No. Ricin is a type of poison. It isn’t caused by a living organism, and it can’t be passed from one person to another.

Why is ricin considered a possible terror weapon?

A militia group in northwestern Minnesota plotted to use ricin against law enforcement personnel in the early nineties. Iraq is believed to have developed ricin as a weapon, and there is also evidence linking al-Qaeda with the use of ricin. In 1978, injected ricin was used to kill a Bulgarian dissident at a bus stop in London.

Ricin has never been used as a weapon of mass destruction, and it isn’t clear whether a big release of ricin into the air is actually possible. The most likely possibility is the use of ricin in an enclosed space, like a subway, the inside of a bus, or a retail store.

Ricin is considered a possible terror weapon because:

What should I do if I think I may have been exposed to ricin?

If you have any reason to believe that you may have been exposed to ricin, talk to your doctor immediately. If you see any suspicious situations or activity in your community – including possible use of a chemical like ricin as a weapon – alert your local law enforcement agency.

High Consequence Infectious Disease (HCID) Toolbox for Frontline Health Care Facilities
The core of the Toolbox is a new screening algorithm that can be integrated into routine clinical workflows. This algorithm is combined with simple planning, training, and exercise tools that facilities can use and modify to ensure preparedness components are in place and regulatory requirements are met. In addition, an HCID Readiness Binder has been created which contains point of care tools to help aid responses to any suspect HCID situation. This Toolbox will be continually updated in response to user needs. The recommendations in this Toolbox are meant to create a standard for Minnesota Frontline facilities and are not regulatory.