Amputations are preventable and debilitating injuries that lead to losses in productivity and income. Although work-related amputations, both fatal and non-fatal, occur less frequently than other work-related injuries, they are often more severe and impact both the worker and employer more profoundly.

Review of these injuries and tracking of these events can provide critical information for the development and improvement of prevention strategies and regulations to protect workers.

These numbers can be compared to the numbers of amputations as reported by employers from the Survey of Occupational Injury and Illnesses, based on a probability sample of employers and their OSHA injury logs. While there is relatively little year-to-year correlation in the numbers (up to a two-fold difference in counts), the average number of cases per year over the period 2000-2014 for each of the amputation indicators is quite similar: 135 cases based on workers’ compensation claims versus 123 cases as estimated by the SOII.  National estimates of the number of amputations reported through workers’ compensation are not readily available since workers’ compensation systems differ for each state.  Also, comparison between states is not advised due to differences in eligibility and other worker’s compensation policies, differences in the mix of industries, and other factors.

Number and Rate of Amputation Cases with Lost Work-Time Filed with State Workers’ Compensation in Minnesota, 2000-2014 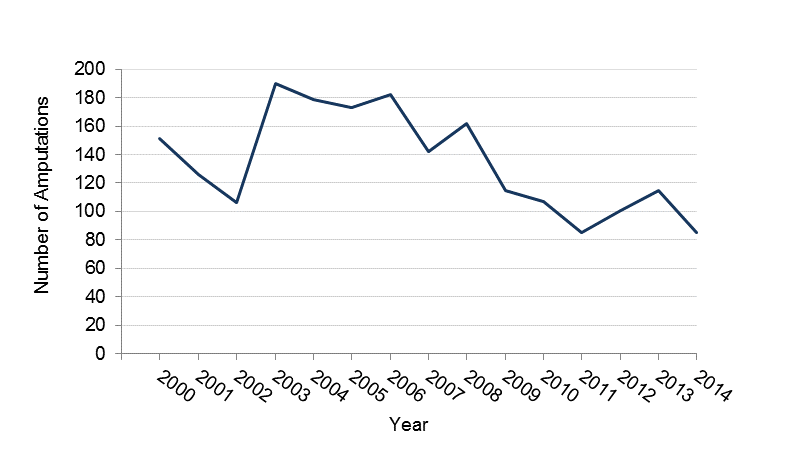 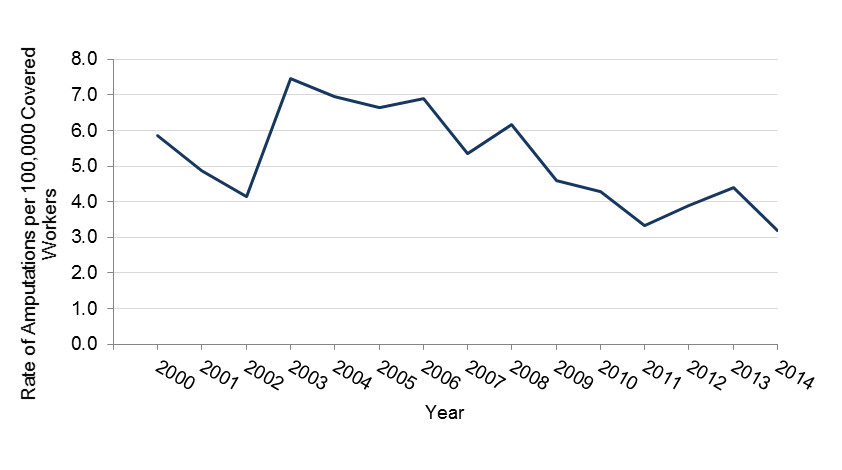 Trend analysis of both amputation indicators demonstrates a non-significant trend, neither increasing nor decreasing between 2000 and 2014.   As this indicator makes use of workers’ compensation data there may be an undercount in the number of amputations counted.  This may be due to underreporting by employees, physicians, or employers to their workers’ compensation insurer.   Even though this indicator may not be a complete count of amputations, it does provide an understanding of the rates and trends of amputations that occur each year and the continued need for both surveillance and intervention programs to further reduce work-related amputations

Return to Indicators of Occupational Health and Safety