The majority of cases of elevated blood lead levels (BLL) among adults are related to a workplace or hobby exposure.  Elevated blood lead may cause damage to the nervous, hematologic, reproductive, renal, cardiovascular, or gastrointestinal systems.  Some early symptoms of lead poisoning may include: fatigue, upset stomach or stomach cramps, poor appetite, irritability, nervousness or depression, headache, sleeplessness, metallic taste in the mouth, reproductive problems, high blood pressure, lack of concentration, and muscle and/or joint pain.  Because of these detrimental health effects, the Federal and Minnesota Occupational Safety and Health Administration (OSHA) lead standards (1910.1025) require, among many other items, monitoring of blood lead levels in adults who are exposed to airborne lead concentrations that exceed certain thresholds.

This indicator utilizes data collected by the MDH Lead Program and provided to the MDH Center for Occupational Health and Safety.  Minnesota Statute 144.9502 requires all health care providers and laboratories to report blood lead levels for both adults and children to the Minnesota Department of Health (MDH).  The Lead Program collects the Minnesota blood lead test results and other reportable data.  The childhood lead program addresses concerns related to elevated blood lead levels in children, and the MDH adult lead ABLES program address concerns for individuals over the age of 18 who have elevated blood lead levels.

Occupational lead exposure is of concern both for the worker and the worker’s family living in the same household.  Similar to other occupational exposures, lead dust can be carried home on clothes, shoes, skin, and hair which can then be ingested by other members of the family.  Lead poisoning in young children or a developing fetus may cause learning, behavior, and health problems; or possibly miscarriages, premature births, and stillbirths in pregnant women. Information on how to prevent bringing lead home can be found at the MDH Environmental Health Division’s lead webpage.

The lead indicator is based on a number of different blood lead levels reflecting various levels of concern and/or regulatory standards.  As adverse health effects are believed to occur at very low levels, the lowest level of concern identified by the indicator is at 10 µg/dL   The U.S. Department of Health and Human Services recommends that adult blood levels be less than 25 µg/dL, which is the second level for this indicator.  The third and highest threshold level is 40 µg/dL, which represents the highest blood lead level allowable by OSHA standards.

*The rate is per 100,000 employed persons. **Cell count less than five, suppressed for privacy and as rates calculated with case counts less than 5 may be unstable. 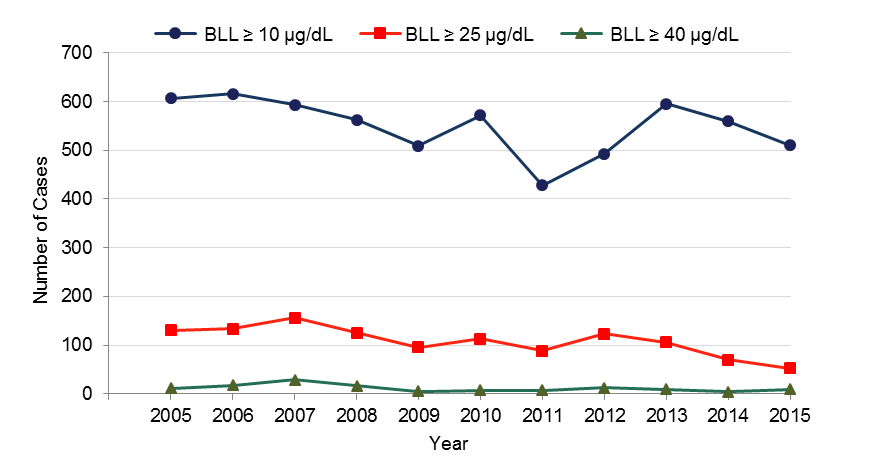 Prevalence Rate of Adults with an Elevated BLL in Minnesota, 2005-2015 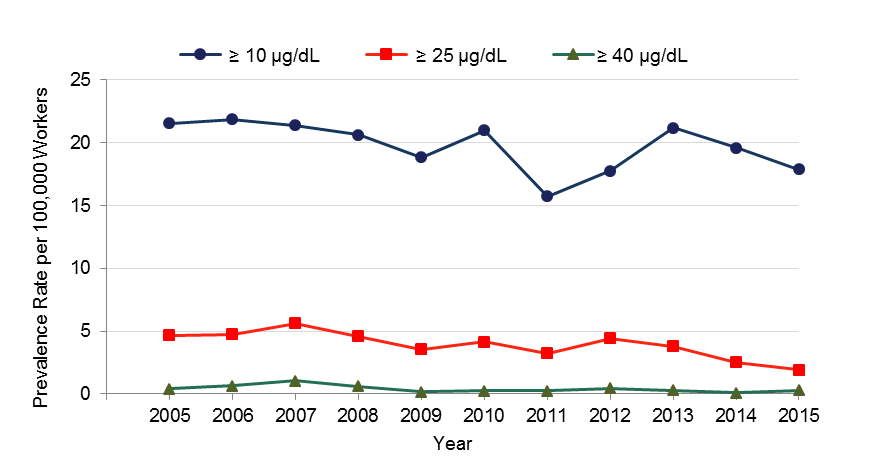 Incidence Rate of Adults with an Elevated BLL in Minnesota, 2005-2015 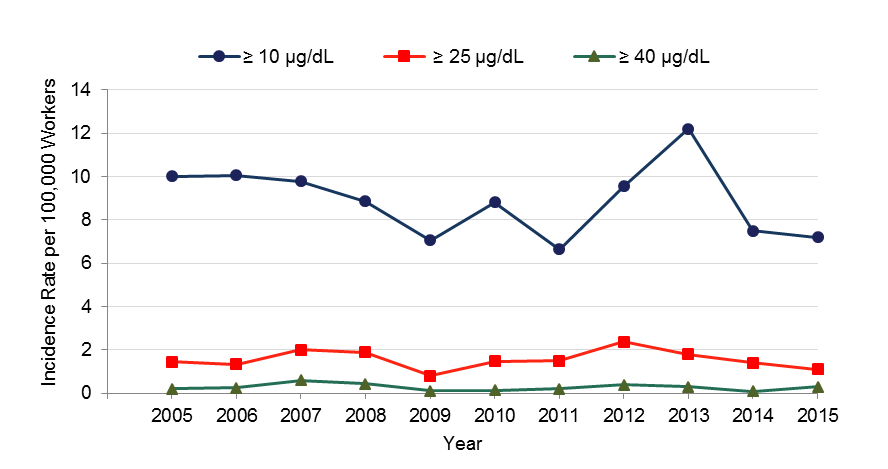 Blood lead levels have remained fairly consistent over the past ten years. Since the 1970’s there have been a number of regulatory actions, such as the banning of lead from paint, gasoline, and other products, that have greatly reduced exposures to lead in the United States population.  The reduction between levels measured in the 1970’s and current levels are dramatic; however, the decline has slowed over the last decade and there is little change seen over the past 5 years.   Trend analysis of the indicator finds there is no significant difference in the number of blood lead measures at 10, 25, and 40 µg/dL over the past 10 years.  This indicator may not be representative as it only captures information on individuals who have been referred for, or sought out, testing and assumes that all laboratories and clinics are compliant with the statute requiring reporting to the MDH.  It is believed that the possible undercount from non-compliant laboratories would be small as it is a requirement for a number of certifications that laboratories procure.  Even with this potential undercount, this indicator clearly demonstrates that potentially harmful occupational exposures to lead are continuing to occur each year.