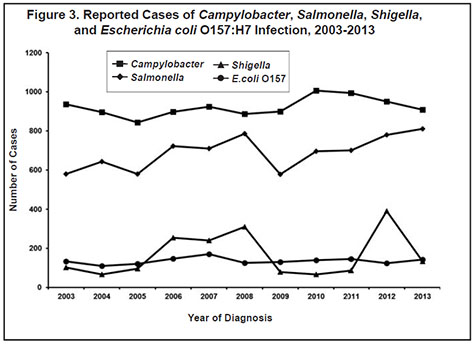 Two hundred twenty-four (28%) cases were hospitalized due to their infection. One culture-confirmed Salmonella infection case died in 2013, a 57 year-old who died due to gastrointestinal bleeding 8 days after Salmonella was isolated from a stool specimen.

Of the 710 cases interviewed, 80 (11%) had traveled internationally during the week prior to their illness onset. There were 7 cases of S. Typhi infection; 3 had traveled to India, 1 to Mexico, and 1 to Denmark and the United Kingdom.

From March through April, 3 cases with S. Infantis were associated with ducklings purchased from the same tractor supply store. The cases were part of a multi-state outbreak that resulted in 158 persons infected with
S. Infantis, S. Lille, S. Newport, or S. Mbandaka in 30 states associated with live poultry from two national suppliers.

Also from March through April, 19 S. Typhimurium infections were associated with eating queso fresco (a fresh Mexican-style white cheese) made from unpasteurized milk by a person that sold it door-to-door and on a street corner in Minneapolis. Seven additional ill persons were identified but not tested. All were Hispanic.

In June, 6 illnesses, including 1 S. I 4,12:i:- infection, occurred among attendees of a family gathering. The likely vehicle was seedless watermelon; however, it was not determined if the watermelon was contaminated prior to purchase or during preparation or serving.

In June and July, 12 S. Newport cases in Minnesota were part of a multi-state outbreak that resulted in 37 cases in six states. Human isolates were resistant to ampicillin, amoxicillin/clavulanate, cefoxitin, ceftriaxone, cephalothin, chloramphenicol, streptomycin, sulfisoxazole, and tetracycline. The Minnesota cases were associated with consuming private kill beef, likely from a single farm. Leftover beef and liver from a case-household that purchased a whole cow from the implicated farm tested positive for the outbreak strain of S. Newport. In Wisconsin, cases were primarily associated with direct contact with cattle. A common source of cattle for the multi-state cases was not identified, but it is likely that this strain of S. Newport occurs widely in cattle herds in Wisconsin and elsewhere. A high proportion of the cases in Minnesota were Hmong.

In July, 7 S. Javiana cases associated with a sandwich restaurant in Northfield were identified. No specific menu item could be implicated, and the source of the contamination was not identified. The most plausible vehicle was a contaminated produce item.

In July, an outbreak associated with a gathering at Ham Lake resulted in 3 confirmed S. Livingstone cases and one additional ill person who was not tested. A goat from a live animal market was slaughtered and prepared on the day of the gathering, and the goat meat was most likely the vehicle.

In August, 2 cases of S. Enteritidis were identified among residents of an assisted living facility. Both cases had Salmonella isolated from blood, and 1 was hospitalized. The most plausible source of the outbreak was undercooked eggs sourced from a local farm. However, other routes of transmission or vehicles could not be ruled out.

One hundred nineteen illnesses were identified among persons who attended an Ecuadorian Festival in Minneapolis in August; Salmonella was isolated from 40 case stool specimens as well as from several leftover foods. Multiple Salmonella serotypes were identified among the cases: Typhimurium, Uganda, I 4,[5],12:i:-, Chailey, and Infantis. One case also was co-infected with Campylobacter jejuni. Most cases reported eating food from one booth that served roasted pork, guinea pig, pork tripe stuffed with vegetables, rice, potatoes, ceviche, and boiled corn (mote). While no food item was implicated as the original source of the Salmonella, several PFGE subtypes isolated from cases and leftover foods previously have been associated with pork/pigs, suggesting that the whole pigs or pork tripe were most likely the original source of the Salmonella. The environmental health investigation identified evidence of cross-contamination between foods and potential time-temperature abuse of foods by the vendor, likely resulting in the high number of foods that were culture-positive for Salmonella and the high number of illnesses.

In September, an outbreak of S. Saintpaul infections associated with a prison resulted in 3 confirmed cases and 10 additional illnesses. Neither the source of the contamination nor the vehicle of transmission were identified. Several structural and cleanliness issues, as well as a significant rodent infestation in the prison’s kitchen, were identified and may have contributed to foodborne transmission. However, other routes of transmission could not be ruled out.