Statewide active surveillance for invasive Streptococcus pneumoniae (pneumococcal) disease began in 2002, expanded from the metropolitan area, where active surveillance was ongoing since 1995. In 2013, 542
(10.1 per 100,000) cases of invasive pneumococcal disease were reported. By age group, annual incidence rates per 100,000 were 12.6 cases among children aged 0-4 years, 2.2 cases among children and adults aged 5-39 years, 10.4 cases among adults 40-64 years, and 34.9 cases among adults aged 65 years and older.

In 2013, pneumonia occurred most frequently (66% of infections), followed by bacteremia without another focus of infection (23%), and pneumococcal meningitis (4%). Fifty-eight (11%) cases died. Health histories were available for 51 of the 58 cases who died. Of these, 45 had an underlying health condition reported. The conditions most frequently reported were atherosclerotic cardiovascular disease (16), chronic obstructive pulmonary disease (9), diabetes (14), heart failure/congestive heart failure (11), and renal failure/ dialysis (5).

In 1999, the year before the pediatric pneumococcal conjugate vaccine (Prevnar [PCV-7]) was licensed; the rate of invasive pneumococcal disease among children <5 years of age in the metropolitan area was 111.7 cases/100,000. Over the years 2000-2002 there was a major downward trend in incidence in this age group (Figure 6). Rates in each of the subsequent 8 years were level or somewhat higher, although there has not been a continuing upward trend (Figure 6). Based on the distribution of serotypes among isolates from these cases, this increase was limited to disease caused by non-vaccine serotypes (i.e. serotypes other than the 7 included in PCV-7) (Figure 6). 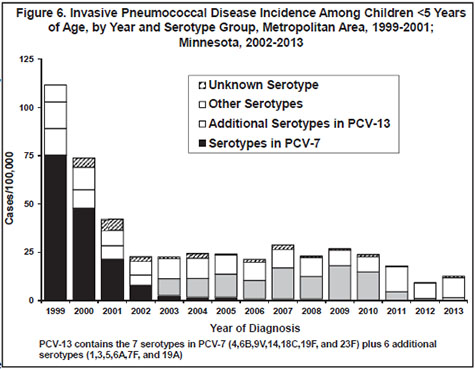