Surveillance for unexplained critical illnesses and deaths of possible infectious etiology (UNEX) began September 1995. Focus is given to cases < 50 years of age with no significant underlying conditions; however, any case should be reported regardless of the patient’s age or underlying medical conditions to determine if further testing conducted or facilitated by MDH may be indicated. In addition to provider reporting, death certificates are reviewed for any deaths in persons <50 years of age with no apparent significant underlying conditions for possible unexplained infectious syndromes.

In 2006, MDH began Medical Examiner (ME) Infectious Deaths Surveillance (known as MED-X) to evaluate all ME cases for infectious-related deaths. MEs report explained and unexplained cases. Unexplained deaths in previously healthy individuals <50 years of age are included regardless of infectious hallmarks; this is predominantly represented by Sudden Unexplained Infant Deaths. In addition, we review death certificates for any case in which an autopsy was performed by an ME with a potential infectious cause of death. Cases found through death certificate review are also considered for UNEX surveillance if they are <50 years of age and have no immunocompromising conditions.

Testing of pre-mortem and post-mortem specimens is conducted at the PHL and the CDC Infectious Diseases Pathology Branch (IDPB). Cases are excluded from UNEX if they are determined to be explained by providers, are not critically ill, or have no infectious disease hallmarks.

There were 70 cases that met criteria for UNEX surveillance (58 deaths and 12 critical illnesses) in 2013, compared to 82 cases in 2011. Of the 70, 61 (88%) were reported by providers, 8 (12%) were found by death certificate review, and 1 (2%) were found through other reporting methods. Twenty-nine (41%) cases presented with respiratory symptoms; 11 (16%) with neurologic symptoms; 6 (9%) with cardiac symptoms; 19 (28%) with sudden unexpected death; 2 (3%) with shock/sepsis; 2 (3%) with an illness that did not fit a defined syndrome; 1 (1%) with gastrointestinal illness. The age of cases ranged from newborn to 93 years. The median age was 16 years among 61 reported cases, and 39 years among 9 non-reported cases found through active surveillance. Forty percent resided in the metropolitan area and 54% were male.

There were 129 cases that had specimens tested at the PHL and/ or the IDPB. Forty-five cases had pathogens identified as confirmed, probable, or possible cause of illness, including 35 UNEX cases (Table 5). Among 40 unexplained deaths occurring in those <50 years of age without any immunocompromising conditions, UNEX helped to identify the pathogen(s) involved in 17 (43%) cases. ME surveillance detected an additional 23 cases with pathogens identified by MEs as the cause of death (Table 5). Cases with pathogens of public health importance detected included a 91 year-old female who presented with slurred speech, head and neck pain and had a history of an epidural injection known to be contaminated. CSF PCR testing done at the PHL identified Streptococcus salivarius which indicated improper use of PPE during the procedure rather than infection from a contaminated product. The first documented case of Jamestown Canyon virus in Minnesota was detected in a 49 year-old male who presented with back and shoulder pain that progressed to seizures. PCR serum testing at CDC detected Jamestown canyon virus. Finally, UNEX surveillance was able to determine the etiologic agent in the death of a 48 year-old female who died at home from pneumonia. Testing at PHL and CDC detected Legionella pneumophila and a public health investigation was initiated. 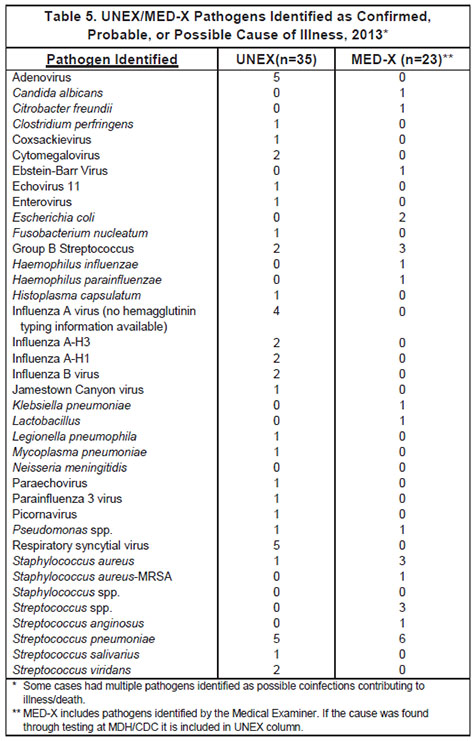