Although overall incidence rates for STDs in Minnesota are lower than those in many other areas of the United States, certain population subgroups in Minnesota have very high STD rates. Specifically, STDs disproportionately affect adolescents, young adults, and persons of color.

Chlamydia trachomatis infection is the most commonly reported infectious disease in Minnesota. In 2014, 19,897 chlamydia cases (375 per 100,000 population) were reported, representing a 6% increase from 2013 (Table 3).

Chlamydia infections occur throughout the state, with the highest reported rates in Minneapolis (999 per 100,000) and St. Paul (818 per 100,000). While there was an overall increase of 6% across the state in 2014 the greatest increase for chlamydia was seen in the suburban metropolitan area of the Twin Cities. This area displayed an increase of 19%, as shown in Table 4. Every county in Minnesota had at least 2 chlamydia cases in 2014. 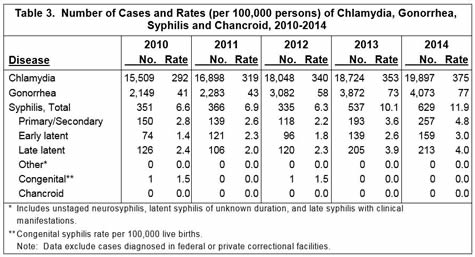 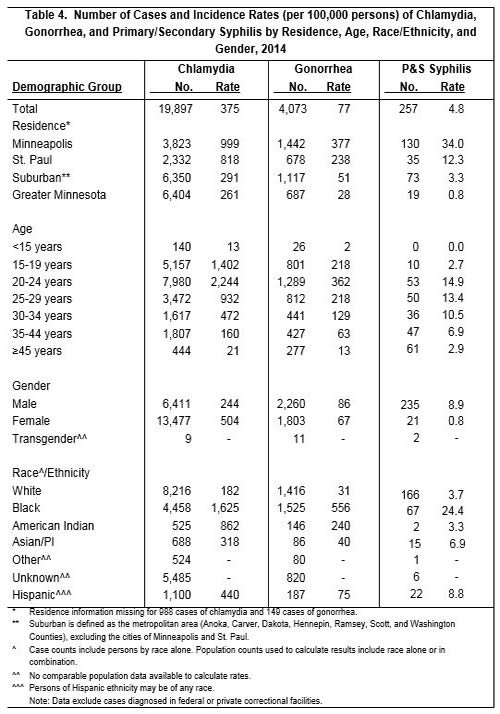 Gonorrhea, caused by Neisseria gonorrhoeae, is the second most commonly reported STD in Minnesota. In 2014, 4,073 cases (77 per 100,000 population) were reported, representing a 5% increase from 2013. This is the highest reported rate of gonorrhea in the last decade (Table 3).

Surveillance data for primary and secondary syphilis are used to monitor morbidity trends because they represent recently acquired infections. Data for early syphilis (which includes primary, secondary, and early latent stages of disease) are used in outbreak investigations because they represent infections acquired within the past 12 months and signify opportunities for disease prevention.

Primary and Secondary Syphilis
The incidence of primary/secondary syphilis in Minnesota is lower than that of chlamydia or gonorrhea (Table 3), but has remained elevated since an outbreak began in 2002 among men who have  sex with men (MSM). In 2014, there were 257 cases of primary/secondary syphilis in Minnesota (4.8 cases per 100,000 persons). This represents an increase of 33% compared to the 193 cases (3.6 per 100,000) reported in 2013.

Congenital Syphilis
There were no cases of congenital syphilis reported in Minnesota in 2014.

Chancroid continues to be very rare in Minnesota. No cases were reported in 2014. The last case was reported in 1999.