The majority (76%) of cases were identified as a result of individuals seeking medical care for symptoms of TB disease. Various targeted public health interventions identified a portion of the remaining 24% of cases. Such methods of case identification are considered high priority, core TB prevention and control activities; they included TB contact investigations (6%), follow-up evaluations resulting from abnormal findings on pre-immigration exams performed overseas (5%), and domestic refugee health assessments (3%). An additional 7% of TB cases were identified through a variety of other means (e.g., occupational screening or other targeted testing for TB). Four (3%) cases were diagnosed incidentally while being evaluated for another medical condition.

The most distinguishing characteristic of the epidemiology of TB disease in Minnesota continues to be the large proportion of cases occurring among persons born outside the United States. In 2014, the percentage of TB cases in Minnesota occurring in foreign-born persons was 73%, which was lower than the 5-year average of 81% from 2010-2014. In comparison, 67% of TB cases reported nationally in 2014 were foreign-born. The 108 foreign-born TB cases reported in Minnesota represented 26 different countries of birth; the most common region of birth among these patients was Sub-Saharan Africa (53% of foreign-born cases), followed by South/Southeast Asia (29%), East Asia/Pacific (9%), and Latin America (including the Caribbean) (5%) (Figure 6). 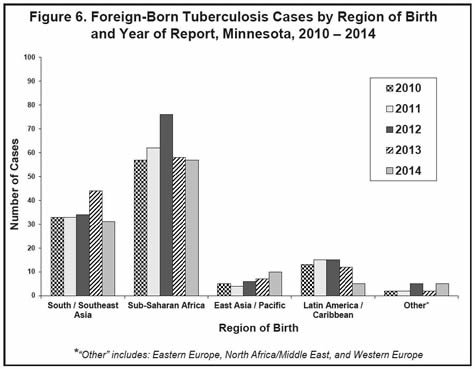 Among the 18 U.S.-born pediatric TB cases (<15 years of age at TB diagnosis), 15 (83%) had at least one foreign-born parent or guardian. These second-generation children appear to experience an increased risk of TB disease that more closely resembles that of foreign-born persons. The ethnic diversity among foreign-born TB cases in Minnesota reflects the unique and constantly changing demographics of immigrants and other foreign-born populations arriving in the state. Among the foreign-born TB cases, 20% were diagnosed with TB disease within the first 12 months after arriving in the United States, and an additional 18% were diagnosed 1 to 2 years after their arrival. These cases most likely acquired TB infection prior to immigrating and started progressing to active TB disease shortly after arrival. Of the 13 TB cases 15 years of age or older who arrived as immigrants or refugees and diagnosed in Minnesota within 12 months of arriving in the U.S., only 7 had any TB-related condition noted in their pre-immigration medical examination reports. These findings highlight the need for clinicians to have a high index of suspicion for TB among newly arrived foreign-born persons, regardless of the results of medical exams performed overseas.

Aside from foreign-born persons, individuals in other high risk groups comprise a smaller proportion of the TB cases in Minnesota. Among cases reported in 2014, 25% occurred among persons with certain medical conditions (excluding HIV infection) that increase the risk for progression from latent TB infection (LTBI) to active TB disease (e.g., diabetes, prolonged corticosteroid or other immunosuppressive therapy, end stage renal disease). Following the presence of these underlying medical conditions, the next most common risk factor was substance abuse (including alcohol abuse and/or injection and non-injection drug use), with 5% of TB cases having a history of substance abuse during the 12 months prior to their TB diagnosis. Five percent of cases also reported being homeless during the 12 months prior to diagnosis. Four (3%) were co-infected with HIV. Another high risk group accounting for 1% of cases reported in Minnesota included correctional facility residents at time of diagnosis.