Surveillance for unexplained critical illnesses and deaths of possible infectious etiology (UNEX) began September 1995. Focus is given to cases < 50 years of age with no significant underlying conditions; however, any case should be reported regardless of the patient’s age or underlying medical conditions to determine if further testing conducted or facilitated by MDH may be indicated. In addition to provider reporting, death certificates are reviewed for any deaths in persons <50 years of age with no apparent significant underlying conditions for possible unexplained infectious syndromes.

In 2006, MDH began Medical Examiner (ME) Infectious Deaths Surveillance (known as MED-X) to evaluate all ME cases for infectious-related deaths. MEs report explained and unexplained cases. Unexplained deaths in previously healthy individuals <50 years of age are included regardless of infectious hallmarks; this is predominantly represented by Sudden Unexplained Infant Deaths. In addition, we review death certificates for any case in which an autopsy was performed by an ME with a potential infectious cause of death. Cases found through death certificate review are also considered for UNEX surveillance if they are <50 years of age and have no immunocompromising conditions.

Testing of pre-mortem and post-mortem specimens is conducted at the PHL and the CDC Infectious Diseases Pathology Branch. Cases are excluded from UNEX if they are determined to be explained by providers, are not critically ill, or have no infectious disease hallmarks.

Eighty-nine cases met criteria for UNEX surveillance (81 deaths and 8 critical illnesses) in 2014, compared to 70 cases in 2013. Of these, 74 (83%) were reported by providers and 15 (17%) were found by death certificate review. Thirty-nine (43%) cases presented with respiratory symptoms; 31 (34%) with sudden unexpected death; 6 (7%) with neurologic symptoms; 6 (7%) with shock/sepsis; 6 (7%) with gastrointestinal illness, and 1 (1%) with cardiac symptoms. The age of cases ranged from newborn to 72 years. The median age was 8 years among 74 reported cases, and 46 years among 15 non-reported cases found through active surveillance. Fifty-two percent resided in the metropolitan area and 53% were male.

One hundred thirty-nine cases had specimens tested at the PHL and/or the CDC. Fifty-nine cases had pathogens identified as confirmed, probable, or possible cause of illness, including 47 UNEX cases (Table 5). Among 51 unexplained deaths occurring in those <50 years of age without any immunocompromising conditions, UNEX helped to identify the pathogen(s) involved in 20 (39%) cases. ME surveillance detected an additional 39 cases with pathogens identified by MEs as the cause of death (Table 5).

Cases with pathogens of public health importance detected included a 7 year-old male who presented with headache, fever, vomiting, and agitation. Testing for IgM antibodies to arboviruses by immunofluorescent assay was positive at PHL, and testing by antigen capture EIA and plaque reduction neutralization test at CDC detected antibodies to La Crosse encephalitis virus. A subsequent visit to the patient’s home identified multiple Aedes triseriatus breeding sites including large numbers of discarded tires that were then removed and properly destroyed. The first documented death of enterovirus D68 virus in Minnesota was detected in a 12 year-old male with an underlying medical condition who had a fever and cough prior to death and evidence of pneumonia on autopsy. PCR testing at PHL and CDC detected enterovirus D68 RNA on nasopharyngeal swab and autopsied lung tissue. Finally, UNEX surveillance was able to help determine the etiologic agent in the death of a 56 year-old female with history of travel to West Africa who presented to an emergency room with confusion and loss of consciousness. Testing at PHL detected Plasmodium falciparum by PCR and direct blood smear, and infection with Ebola virus was ruled out. 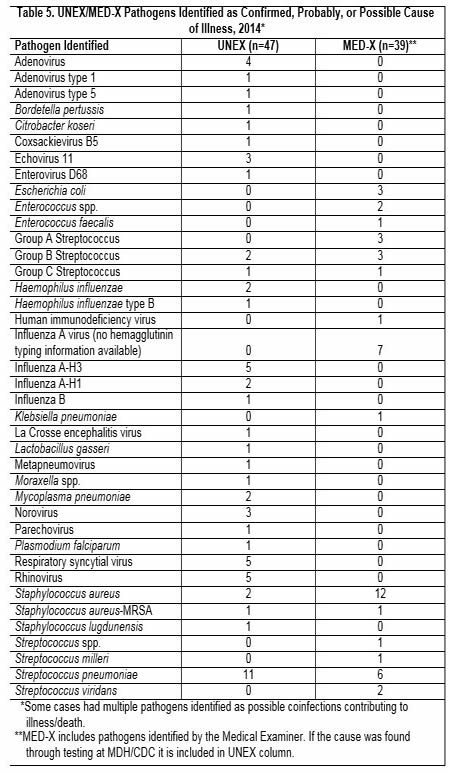