In a 2010 paper published in Clinical Infectious Diseases, we evaluated rapid assays used by Minnesota clinical laboratories for the diagnosis of cryptosporidiosis. The positive predictive value of the rapid assays was 56%, compared to 97% for non-rapid assays, suggesting the widespread use of rapid assays could be artificially contributing to the increased number of reported cases of cryptosporidiosis. In 2015, 239 (76%) patients were positive for Cryptosporidium by a rapid assay conducted in a clinical laboratory. However, 50 (24%) of the 205 specimens received at the PHL could not subsequently be confirmed by polymerase chain reaction or direct fluorescent antibody test. Rapid assay-positive specimens should be confirmed with other methods. It is important that health care providers are aware of the limitations and proper use of rapid assays in the diagnosis of cryptosporidiosis and that they limit testing to patients who have symptoms characteristic of the disease. 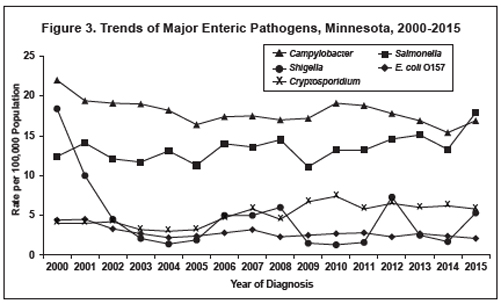