The annual number of AIDS cases reported in Minnesota increased steadily from 1982 through the early 1990s, reaching a peak of 361 cases in 1992. Beginning in 1996, the annual number of new AIDS diagnoses and deaths declined sharply, primarily due to better antiretroviral therapies. In 2016, 131 new AIDS cases (Figure 4) and 67 deaths among persons living with HIV infection were reported. 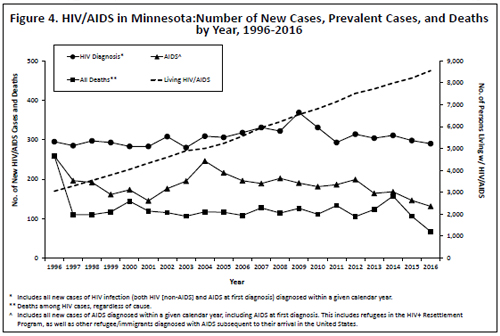 In 2016, 82% (238/290) of new HIV diagnoses (both HIV [non-AIDS] and AIDS at first diagnosis) occurred in the metropolitan area. Regionally, there was a 41% increase in new HIV cases in Greater Minnesota, with 52 cases in 2016 compared to 37 cases in 2015. However, HIV or AIDS cases have been diagnosed in residents of more than 98% of counties statewide. HIV infection is most common in areas with higher population densities and greater poverty.

The majority of new HIV infections in Minnesota occur among males. Trends in the annual number of new HIV infections diagnosed among males differ by race/ethnicity. New infections occurred primarily among white males in the 1980s and early 1990s. Whites still comprise the largest number of HIV infections among males, but the proportion of cases that white males account for is decreasing. In 2016 there were 102 new infections among white males. During the past decade, the number of cases among black African American males has fluctuated from year to year, with 47 HIV diagnoses in 2016. This represents a 17% decrease among African American males from 2015 to 2016. Of note, cases among black, Africanborn men increased 65% from the previous year with 38 cases in 2016 compared to 23 cases in 2015. The number of HIV infections diagnosed among Hispanic males remained similar to the previous year with 23 in 2016 (21 in 2015).

Despite relatively small numbers of cases, persons of color are disproportionately affected by HIV/ AIDS in Minnesota. In 2016, men of color comprised approximately 17% of the male population in Minnesota and 55% of new HIV diagnoses among men. Similarly, persons of color comprised approximately 13% of the female population and 74% of new HIV infections among women. It bears noting that race is not considered a biological cause of disparities in the occurrence of HIV, but instead race can be used as a proxy for other risk factors, including lower socioeconomic status and education. A population of concern for HIV infection is adolescents and young adults (13-24 years). The number of new HIV infections among males in this age group has remained higher than new diagnoses among females since 1999, with 53 cases reported in 2016. Since 2005, the number of cases among young males has increased by about 77%. The number of new HIV infections among adolescent females has remained relatively consistent over time; in 2016 there were 14 cases. From 2014 to 2016, the majority (63%) of new infections among male adolescents and young adults were among youth of color (99/154), with young black African American males accounting for 57% of cases among young males of color. During the same time period, young women of color accounted for 79% (27/34) of the cases diagnosed, with young black African-born women accounting for 52% of cases among young women of color. Between 2014 and 2016 after re-distributing those with unspecified risk, 87% (137/157) of new cases among young males were attributed to male-to-male sex. Among young females, 88% (31/34) of new cases were attributed to heterosexual sex. Since the beginning of the epidemic, male-to-male sex has been the predominant mode of exposure to HIV reported in Minnesota, although the number and proportion of new HIV infections attributed to men who have sex with men (MSM) has declined since 1991. In 1991, 70% (318/455) of new HIV diagnoses were attributed to MSM (or MSM who also inject drugs); in 2016, this group accounted for 63% of new diagnoses (141/225).

The number and percentage of HIV infections in Minnesota attributed to injection drug use (IDU) has declined over the past decade, falling from 12% (54/455) of cases in 1991 to 10% (27/290) in 2016. Heterosexual contact with a partner who has or is at increased risk of HIV infection is the predominant mode of exposure to HIV for women. In 2016, 80% of 65 new HIV diagnoses among women is attributed to heterosexual exposure. Historically, race/ethnicity data for HIV/ AIDS in Minnesota have grouped non-African born blacks and black African-born persons together as “black.” In 2001, we began analyzing these groups separately, and a marked trend of increasing numbers of new HIV infections among black Africanborn persons was observed. In 2016, there were 70 new HIV infections reported among black Africans. While black African-born persons comprise less than 1% of the state’s population, they accounted for 24% of all HIV infections diagnosed in Minnesota in 2016. HIV perinatal transmission in the United States decreased 90% since the early 1990s. The trend in Minnesota has been similar. While the number of births to HIV-infected women increased nearly 7-fold between 1990 and 2016, the rate of perinatal transmission decreased 11-fold, from 15% in 1994-1996 to 1.7% over the last 3 years (2014-2016) with no HIV-positive births from HIV-infected mothers in Minnesota in 2016.