Twenty (23%) counties had at least 1 case in 2016. The majority (77%) of cases occurred in the metropolitan area, primarily in Hennepin (44%) and Ramsey (24%) Counties. Sixteen (10%) were from the other five metropolitan counties. The remaining 23% of cases were reported from Greater Minnesota. Among metropolitan area counties, the highest TB incidence rate in 2016 was reported in Ramsey County (7.4 per 100,000 population), followed by Hennepin County (6.0 per 100,000). The TB incidence rate for all Greater Minnesota counties combined was 1.6 per 100,000 population.

Most (81%) TB cases were identified as a result of individuals seeking medical care for symptoms of disease. Various targeted public health interventions identified a portion of the remaining 19% of cases. Such case identification methods are high priority core prevention and control activities and include follow-up evaluations resulting from abnormal findings on pre-immigration exams performed overseas (7%), contact investigations (5%), and domestic refugee health assessments (2%). An additional 5% were identified through other screening (e.g., other immigration medical exams, employment screening, and other targeted testing for TB). Two (1%) cases were diagnosed with active TB disease incidentally while being evaluated for another medical condition.

In 2016, the percentage of TB cases in Minnesota occurring in persons born outside the United States was 90%, compared to 68% of TB cases reported nationally. The 152 non U.S.-born TB cases reported in Minnesota represented 36 different countries of birth; the most common region of birth among these cases was Sub-Saharan Africa (54% of non U.S.-born cases), followed by South/Southeast Asia (33%), Latin America (including the Caribbean) (7%), East Asia/Pacific (5%), and North Africa/Middle East (1%) (Figure 7).

Individuals in other high risk groups comprise smaller proportions of the cases. Note that patients may fall under more than one risk category. Eighteen percent occurred among persons with certain medical conditions that increase the risk for progression from latent TB infection (LTBI) to active TB disease (e.g., diabetes, prolonged corticosteroid or other immunosuppressive therapy, end stage renal disease). The next most common risk factor was HIV infection (7%). Substance abuse (including alcohol abuse and/ or injection and non-injection drug use) during the 12 months prior to their TB diagnosis was reported for 4% of patients. Four percent reported being homeless during the 12 months prior to diagnosis. Long-term care facility residence at time of diagnosis accounted for 1% of cases.

Of 136 culture-confirmed TB cases with drug susceptibility results available, 28 (21%) were resistant to at least one first-line anti-TB drug [i.e., isoniazid (INH), rifampin, pyrazinamide, or ethambutol], including 19 (14%) cases resistant to at least INH. There were 8 new cases of multidrug-resistant TB (MDR-TB; resistance to at least INH and rifampin) reported in 2016, compared to a total of 5 MDR-TB cases in the previous 5-year period (2011-2015). 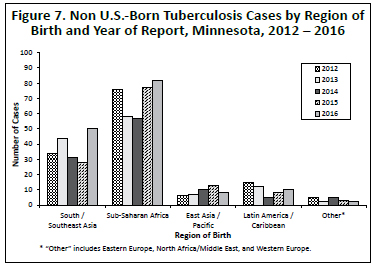