Historically, the primary arboviral encephalitides found in Minnesota have been La Crosse encephalitis, Western equine encephalitis (WEE), and West Nile virus (WNV) encephalitis, but in recent years other viruses, like Jamestown Canyon have emerged as significant causes of disease. While WNV and WEE are maintained in mosquito-to-bird transmission cycles involving several different species of each, La Crosse and Jamestown Canyon viruses use mammals instead of birds as part of their transmission cycles. WNV is established throughout Minnesota, and will probably be present in the state to some extent every year, whereas human cases of other diseases may occur more sporadically. Interpreting the effect of weather on arboviral transmission is complex, making it difficult to predict the number of people who will become infected in any given year.

In Minnesota, 30 WNV disease cases were reported in 2017, considerably fewer than 83 cases in 2016. Thirteen (43%) had neuroinvasive presentations including encephalitis or meningitis, and there was 1 death. The other 17 cases had West Nile fever. Eighty percent of the cases were male, and the median age was 59 years (range, 16 to 86). Fifteen cases were hospitalized. The majority of cases (83%) reported symptom onset in July, August, or September. Seventeen asymptomatic WNV-positive blood donors were also identified in 2017. Risks for human WNV infection continue to be higher in central and western Minnesota where the primary mosquito vector, Culex tarsalis, is most abundant.

In 2017, 1 La Crosse encephalitis case was reported. The case was a female in her teens, and she presented with encephalitis in early September. The disease, which primarily affects children, is transmitted through the bite of infected Aedes triseriatus (Eastern Tree Hole) mosquitoes, and is maintained in a cycle that includes mosquitoes and small mammals. Exposure to infected mosquitoes typically occurs in wooded or shaded areas inhabited by this species, especially in areas where water-holding containers (e.g., waste tires, buckets, or cans) that provide breeding habitats are abundant. Since 1985, 144 cases have been reported from 22 Minnesota counties, primarily in the southeastern part of the state. Many people who are infected have no apparent symptoms, but severe disease is more common in children. Most people report an illness onset during the typical arboviral season from mid-July through mid- September.

In 2017, 22 cases of Jamestown Canyon virus disease, a California group virus related to La Crosse, were reported. The virus is transmitted by Aedes mosquitoes, and the maintenance cycle in nature is thought to include deer and other large mammals. Much remains unknown about the clinical spectrum of Jamestown Canyon virus, but the typical presentation includes fever, and in more severe cases, meningitis or encephalitis. The virus is likely widespread in Minnesota. Cases were aged 10 to 78 years, with a median of 61 years, and 73% were male. Fourteen (64%) presented with neuroinvasive disease, including meningitis or encephalitis, and most were residents of counties in north central and northeastern Minnesota. Due to the mosquito vectors involved in the transmission cycle for this virus, disease onsets can occur from late spring through the early part of the fall.

Powassan virus (POW) is a tickborne flavivirus that includes a strain (lineage II or “deer tick virus”) that is transmitted by Ixodes scapularis. The virus can cause encephalitis or meningitis, and long-term sequelae occur in approximately half of those patients. Approximately 10-15% of cases are fatal. Since the first case in 2008, there has been cases every year except for 2014 and 2015, with a peak of 11 cases in 2011 (range, 1 to 11). Seven cases of POW were reported in 2017. All but 1 were male, and ages ranged from 9 to 74 years, with a median of 61. Although cases of non-neuroinvasive disease have been reported in previous years, all of the patients in 2017 presented with meningitis or encephalitis. Similar to other tick-borne diseases, the majority of patients report being exposed to ticks in north central Minnesota, and illness onsets follow a similar pattern as is seen for other tickborne diseases, with cases first experiencing symptoms between May and July. Based on findings from routine tick surveillance activities, the virus appears to be widely distributed in the same wooded parts of the state that are endemic to other pathogens transmitted by I. scapularis. 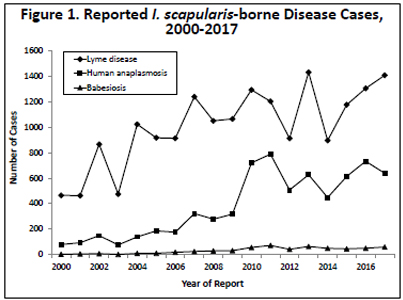