The annual number of AIDS cases reported in Minnesota increased steadily from 1982 through the early 1990s, reaching a peak of 361 cases in 1992. Beginning in 1996, the annual number of new AIDS diagnoses and deaths declined sharply, primarily due to better antiretroviral therapies. In 2017, 144 new AIDS cases (Figure 4) and 75 deaths among persons living with HIV infection in Minnesota were reported.

The number of HIV (non-AIDS) diagnoses has varied over the past decade. There was a peak of 279 newly diagnosed HIV (non-AIDS) cases in 2009, and a low of 217 new HIV (non-AIDS) cases reported in 2017.
In 2017, 81% (229/284) of new HIV diagnoses (both HIV [non-AIDS] and AIDS at first diagnosis) occurred in the metropolitan area. In Greater Minnesota there were 55 cases in 29 counties. HIV infection is most common in areas with higher population densities and greater poverty.

A population of concern for HIV infection is adolescents and young adults (13-24 years). The number of new HIV infections among males in this age group has remained higher than new diagnoses among females since 1999, with 47 cases reported in 2017. The number of new HIV infections among adolescent females has remained relatively consistent over time; in 2017 there were 8 cases. From 2015 to 2017, the majority (65%) of new infections among male adolescents and young adults were among youth of color (99/154), with young black African American males accounting for 39% of cases among young males of color. During the same period, young women of color accounted for 80% (28/35) of the cases diagnosed, with young black African-born women accounting for 37% of cases among young women of color. Between 2015 to 2017 after re-distributing those with unspecified risk, 86% of new cases among young males were attributed to male-to- male sex.  Among young females, 87% of new cases were attributed to heterosexual sex.

Since the beginning of the epidemic, male-to-male sex (MSM) has been the predominant mode of exposure to HIV reported in Minnesota. In 2017, MSM (including MSM who also inject drugs) accounted for 67% of new diagnoses among men. Heterosexual contact with a partner who has or is at increased risk of HIV infection is the predominant mode of exposure to HIV for women. In 2017, 84% of 74 new HIV diagnoses among women was attributed to heterosexual exposure. The number of cases among injection drug users (IDUs) (MSM/IDU and IDU) has remained similar over the past 3 years with 26 cases in 2017 compared to 27 cases
in 2016, which indicates a continued pattern of increased HIV infection among IDUs in the state.

While black African-born persons comprise less than 1% of the state’s population, they accounted for 21% of all HIV infections diagnosed in Minnesota in 2017. 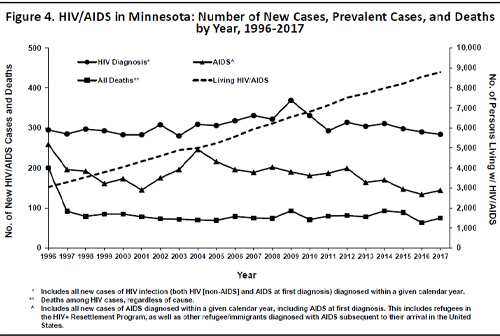