Gonorrhea and chlamydia in Minnesota are monitored through a mostly passive surveillance system involving review of submitted case reports and laboratory reports. Syphilis is monitored through active surveillance, which involves immediate follow-up with the clinician upon receipt of a positive laboratory report. Although overall incidence rates for STDs in Minnesota are lower than those in many other areas of the United States, certain population subgroups in Minnesota have very high STD rates. Specifically, STDs disproportionately affect adolescents, young adults, and persons of color.

Chlamydia trachomatis infection is the most commonly reported infectious disease in Minnesota. In 2017, 23,528 chlamydia cases (444 per 100,000 population) were reported, representing a 4% increase from 2016
(Table 3).

Chlamydia infections occur throughout the state, with the highest reported rates in Minneapolis (1,293 per 100,000) and St. Paul (976 per 100,000). While there was an overall increase of 4% across the state in 2017, the greatest increase for chlamydia was seen in Minneapolis and the metropolitan area suburban area. These areas displayed an increase of 8%, as shown in Table 4. Every county in Minnesota had at least 2 cases in 2017.

Gonorrhea is the second most commonly reported STD in Minnesota. In 2017, 6,519 cases (123 per 100,000 population) were reported. This is the highest reported rate of gonorrhea in the last decade (Table 3).

The emergence of quinolone- resistant N. gonorrhoeae (QRNG) in recent years has become a particular concern. Due to the high prevalence of QRNG in Minnesota as well as nationwide, quinolones are no longer recommended for the treatment of gonococcal infections. Additionally, CDC changed the treatment guidelines for gonococcal infections in August 2012.
CDC no longer recommends cefixime at any dose as a first-line regimen for treatment of gonococcal infections. If cefixime is used as an alternative agent, then the patient should return in 1 week for a test-of-cure at the site of infection. New CDC STD Treatment Guidelines were released in 2015.

Surveillance data for primary and secondary syphilis are used to monitor morbidity trends because these represent recently acquired infections. Data for early syphilis (which includes primary, secondary, and early latent stages of disease) are used in outbreak investigations because these represent infections acquired within the past 12 months and signify opportunities for disease prevention.

Chancroid continues to be very rare in Minnesota. The last case was reported in 1999. 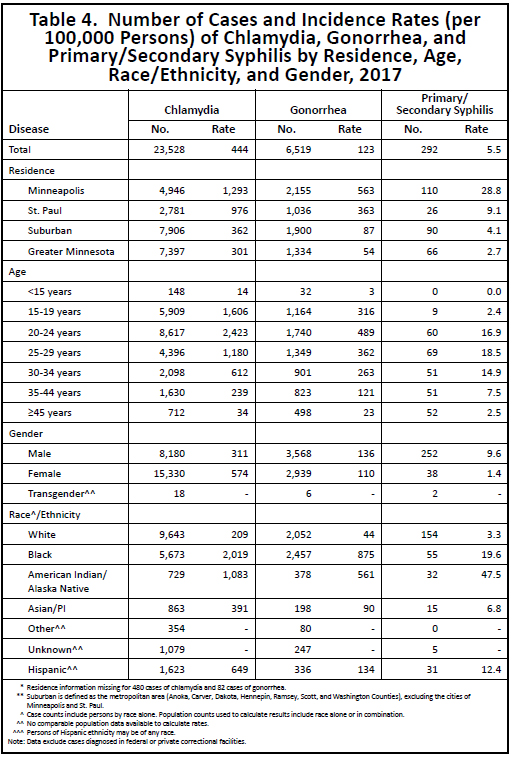