Culture-independent tests (CIDTs) have become increasingly adopted by clinical laboratories for the detection of Shiga toxin in stool. Two hundred twenty-two patient specimens that were positive by a CIDT conducted at a clinical laboratory were not subsequently culture-confirmed, and therefore did not meet the surveillance case definition for inclusion in MDH case count totals.

Two E. coli O157 outbreaks were identified during 2018. Both outbreaks were due to foodborne transmission, and were part of national investigations. These outbreaks resulted in 14 laboratory-confirmed Minnesota cases, with 2 and 12 cases, respectively. In May, a national outbreak was associated with romaine lettuce. Twelve cases were identified in Minnesota. Three cases developed hemolytic uremic syndrome (HUS), and 2 cases died. In October, a national outbreak was associated with chicken salad. Two laboratory-confirmed cases were identified in Minnesota. Neither case developed HUS or died. 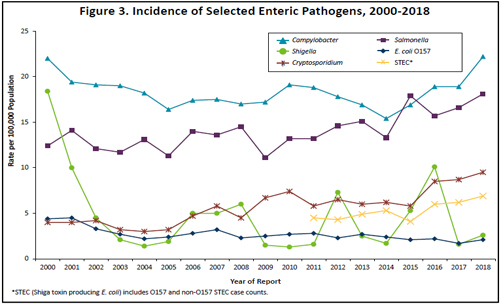