The median age of cases was 30 years (range, 2 months to 96 years). Forty-two percent were between 20 and 49 years of age, and 9% were ≤5 years of age. Fifty-seven percent were male. Fourteen percent were hospitalized; the median length of hospitalization was 3 days. Forty-seven percent of infections occurred during June through September. Of the 1,028 cases for whom data were available, 195 (19%) reported travel outside the United States during the week prior to illness onset. The most common travel destinations were Europe (n=48), Central or South America or the Caribbean (n=46), Mexico (n=37), Asia (n=35), Africa (n=12), and the Middle East (n=11).

In 2009, a culture-independent test (CIDT) became commercially available for the qualitative detection of Campylobacter antigens in stool. In 2019, 36 patients were positive for Campylobacter by an antigen detection CIDT conducted in a clinical laboratory. However, only 12 (33%) of the specimens were subsequently culture-confirmed. Beginning In 2015, some clinical laboratories in Minnesota began testing stool specimens with PCR-based gastrointestinal pathogen panels, another type of CIDT. In 2019, 1,247 patients were positive for Campylobacter by a PCR gastrointestinal panel; 923 (74%) of these specimens were culture-confirmed. Only culture-confirmed cases met the surveillance case definition for inclusion in MDH case count totals. 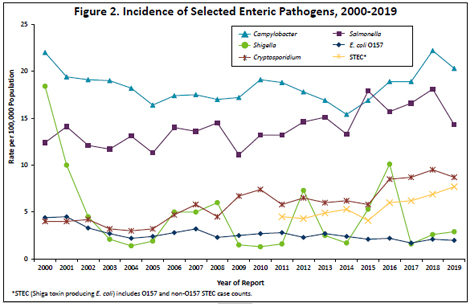