The annual number of AIDS cases reported in Minnesota increased steadily from 1982 through the early 1990s, reaching a peak of 361 cases in 1992. Beginning in 1996, the annual number of new AIDS diagnoses and deaths declined sharply, primarily due to better antiretroviral therapies. In 2019, 111 new AIDS cases (Figure 3) and 76 deaths among persons living with HIV infection in Minnesota were reported.

In 2019, 81% (222/275) of new HIV diagnoses (both HIV [non-AIDS] and AIDS at first diagnosis) occurred in the metropolitan area. In greater Minnesota there were 52 cases in 31 of 78 counties. HIV infection is most common in areas with higher population densities and greater poverty.

Since the beginning of the epidemic, male-to-male sex (men who have sex with men; MSM) has been the predominant mode of exposure to HIV reported in Minnesota. In 2019, MSM (including MSM who also inject drugs) accounted for 67% of new diagnoses among men. Heterosexual contact with a partner who has or is at increased risk of HIV infection is the predominant mode of exposure to HIV for women.

In the fall of 2019, an outbreak was declared among persons who inject drugs (PWID) diagnosed with HIV in Minnesota. Statewide there was a two-fold increase among PWID with 11 cases in 2018 increasing to 22 cases in 2019. The outbreak area includes residents of Hennepin and Ramsey counties where about three quarters of the statewide cases are located (16, 72%). Persons likely to be at high risk for HIV infection include sex partners or syringe-sharing partners of people known to be living with HIV, PWID and their sex partners and needle sharing partners, persons who exchange sex for income or other items they need, and persons who experienced or are currently experiencing homelessness. 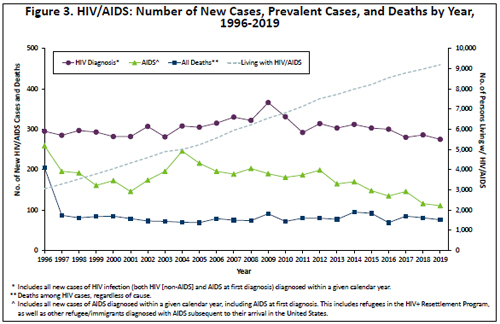