Gonorrhea and chlamydia are monitored through a mostly passive surveillance system involving review of submitted case reports and laboratory reports. Syphilis is monitored through active surveillance, which involves immediate follow-up with the clinician upon receipt of a positive laboratory report. Although overall incidence rates for STDs in Minnesota are lower than those in many other areas of the United States, certain population subgroups have very high STD rates. Specifically, STDs disproportionately affect adolescents, young adults, and persons of color.

Surveillance data for primary and secondary syphilis are used to monitor morbidity trends because these represent recently acquired infections. Data for early syphilis (which includes primary, secondary, and early non-primary/nonsecondary stages of disease) are used in outbreak investigations because these represent infections acquired within the past 12 months and signify opportunities for disease prevention.

The incidence of primary/secondary syphilis in Minnesota is lower than that of chlamydia or gonorrhea (Table 3), but has remained elevated since an outbreak began in 2002 among men who have sex with men (MSM). In 2019, there were 385 cases of primary/secondary syphilis in Minnesota (7.3 cases per 100,000 persons), which is a 32% increase compared to 2018.

Twenty-one congenital syphilis cases were reported in 2019, which is the highest number of cases reported for Minnesota in more than 50 years. Syphilis may be passed from a pregnant person to the unborn baby through the placenta. The infection can cause miscarriages and stillbirths, and infants born with congenital syphilis can suffer a variety of serious health problems, including deformities, seizures, anemia, and jaundice. The CDC reported that the number of infants born with syphilis has nearly tripled since 2015 and in 2018 reached a 20-year high. In Minnesota, the number and rate of congenital syphilis cases among infants has increased years from 2 in 2015 to 32.3 per 100,000 live births in 2019. 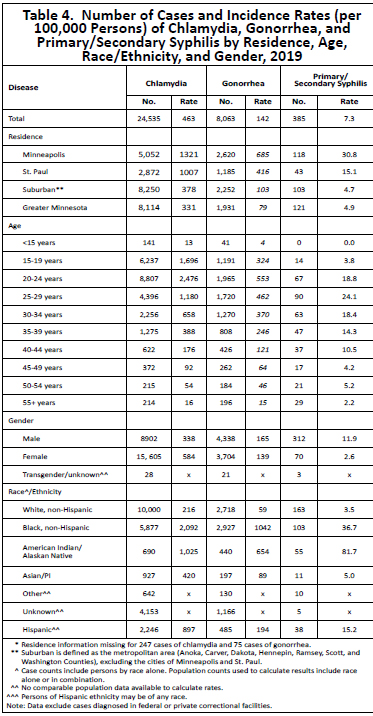