Centers for Disease Control and Prevention

Heat vulnerability in Minnesota and Wisconsin 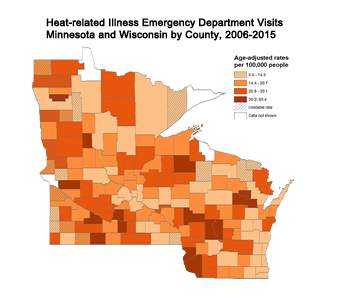 For years, staff in the Minnesota and Wisconsin Environmental Public Health Tracking programs used similar messaging about how older adults, infants and people with chronic health conditions—particularly in urban areas—were more likely to suffer from heat-related illness. Anecdotally, our programs started noticing more cases of heat-related illness outside of these populations.

Our states teamed up to build a more robust dataset to better understand who is most impacted by extreme heat. Because Minnesota and Wisconsin have similar climates, populations and patterns of heat-related illness, we decided to combine our data and work together to assess current trends and patterns.

What did we do?

In 2017, our state Environmental Public Health Tracking programs began discussing heat-related illness and how to frame an analysis. We decided to base the analysis on the following data:

Together, the Minnesota and Wisconsin Tracking programs will work with our Climate and Health Programs to build on our understanding of extreme heat. We will use these findings to tailor messages for specific audiences on websites, in videos, at festivals and in print materials. We still have to be concerned about the elderly and the very young during intense periods of heat, but our data show that there are other populations that may need to be informed of their risk. Our programs will continue to find new ways to proactively protect the health of these at-risk groups.

Use the resources below to learn more about extreme heat safety and access your county’s data:
Minnesota 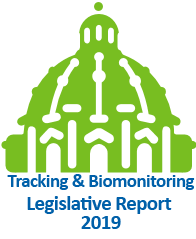