Mesothelioma is a rare and usually fatal cancer of the lining of the chest (pleura) or abdomen (peritoneum).  The great majority of cases are attributable to asbestos exposure in the workplace, although some cases have been associated with environmental exposures.  In contrast to lung cancer -- another cancer that can be caused by asbestos -- mesothelioma is not associated with smoking. While many occupations have had potential exposure to asbestos and an increased risk of mesothelioma, occupations categorized as high risk include plumbers, pipefitters, steamfitters, electricians, shipyard workers, railroad workers, and construction workers.

Mesothelioma has a long latency period, typically occurring 20 to 50 years after asbestos exposure (see figure below).  The median age at diagnosis in Minnesota is 72 for both males and females, while the age range is from 26 to 97.  Mesothelioma rates in Minnesota are over four-fold higher in males than females, reflecting differences in past employment in industries and occupations with asbestos exposure. Family members of asbestos-exposed workers may be exposed through clothing or footwear contaminated with asbestos fibers.

Concerns about mesothelioma risk in Minnesota have primarily focused on several industries and communities in northeastern (NE) Minnesota.  A two-fold excess of mesothelioma among males in that region (seven-county “Arrowhead” region) was identified in a 1997 analysis of cancer rates and trends. Two of the NE counties were among the highest 50 counties in the U.S. for mesothelioma mortality rate for 2000-2009. Carlton County ranks 3rd highest with an age-adjusted annual rate of 55.1 deaths per million (age 15 and above) population while St. Louis County ranked 21st with a rate of 25.1 deaths per million. The U.S. average during that period was 11.1 mesothelioma deaths per million. Subsequent analyses and record-linkage studies using existing employee records identified mesothelioma cases among employees of two large NE industries: the Minnesota taconite (iron ore) mining industry and a ceiling-tile manufacturing plant (Conwed) in Carlton County that used asbestos from 1958 to 1974 as a component of the tiles. Mesothelioma cases among taconite miners had not been previously documented prior to the 2003 MDH report. Those studies and reports can be found on the Reports page under Respiratory Disease at this web site.  State-funded studies of mesothelioma and other health outcomes among Minnesota taconite miners have been underway since 2008 by the University of Minnesota School of Public Health and final results were announced in December 2014. Information about that investigation can be found at the Minnesota Taconite Workers Health Study page. An updated linkage analysis conducted in January 2015 identified 21 additional mesothelioma cases among taconite miners and former Conwed ceiling tile workers, bringing the total known cases to 101 among 69,000 miners and 39 among 5,200 Conwed Workers.These additional cases have been included in an extended mesothelioma case-control study by the University of Minnesota.

This indicator is based on data from the Minnesota Cancer Surveillance System (MCSS) at the Minnesota Department of Health (MDH).  The MCSS is a state-cancer registry that collects information on all newly-diagnosed cancers (cancer incidence) among state residents. All cases between the years 2000 and 2013 residing in the state of Minnesota were counted for the indicator. Additional years of data from MCSS are also shown when examining longer term trends. For comparison, data from three additional sources are shown: national mortality data for mesothelioma, state mortality data, and cancer incidence data from 13 other cancer registries in the U.S. that have been part of the U.S. SEER program since 1992 or earlier. 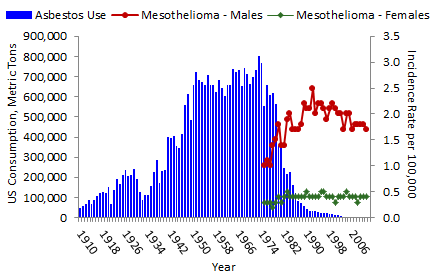 Numbers and Age-Adjusted Rates of Mesothelioma Deaths, Minnesota vs U.S., Males and Females 1999-2013 (ages 15 and greater) 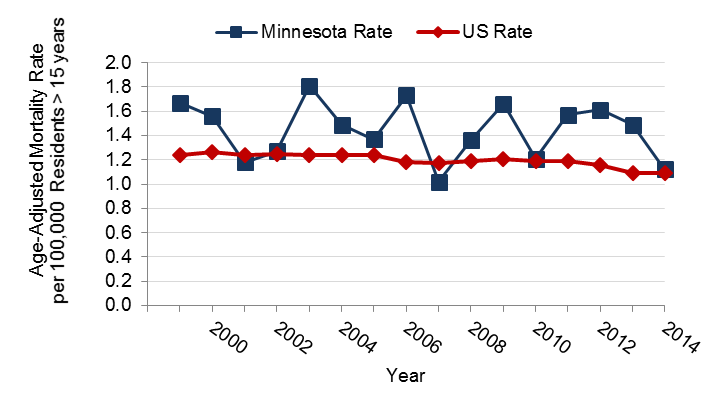 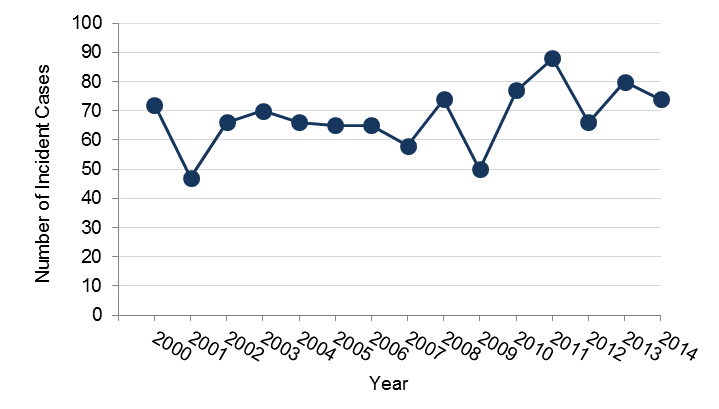 Annual Number of Incident Mesothelioma Cases in Minnesota by Gender, 1988-2014 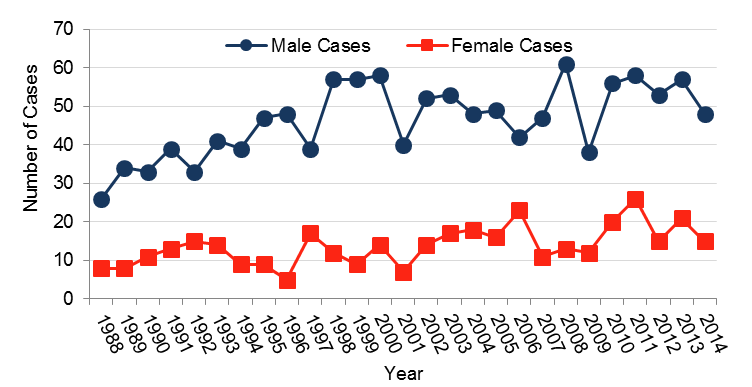 Annual Incidence Rate of Mesothelioma in Minnesota and the United States by Gender, 1992-2013 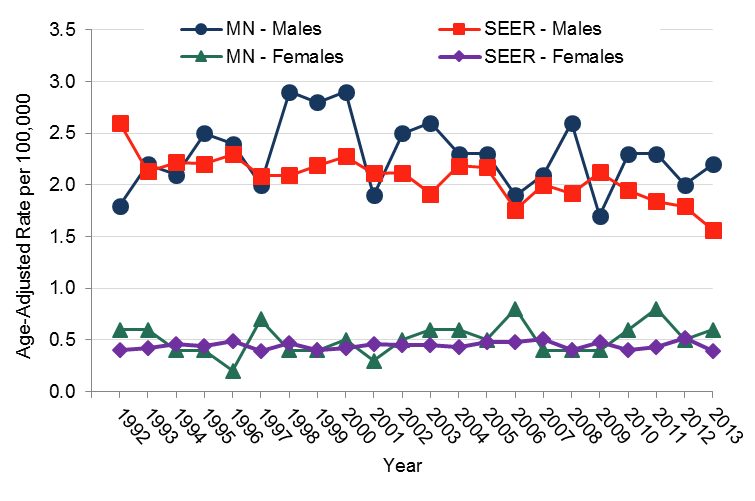 Annual Age-Adjusted Incidence Rates of Mesothelioma among Males by Region, 1992-2013 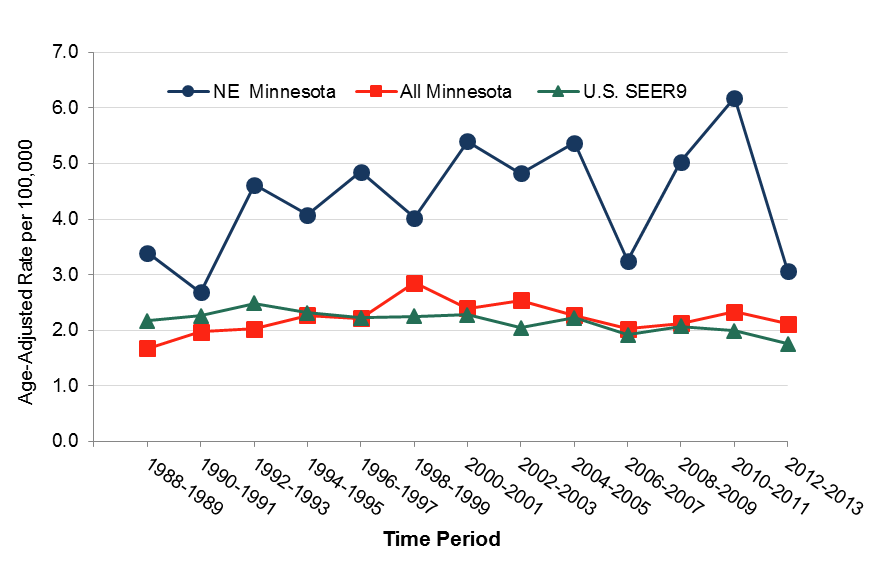 Number of Fatal Occupational Injuries Compared to the Number of Mesothelioma Cases, 1991-2014 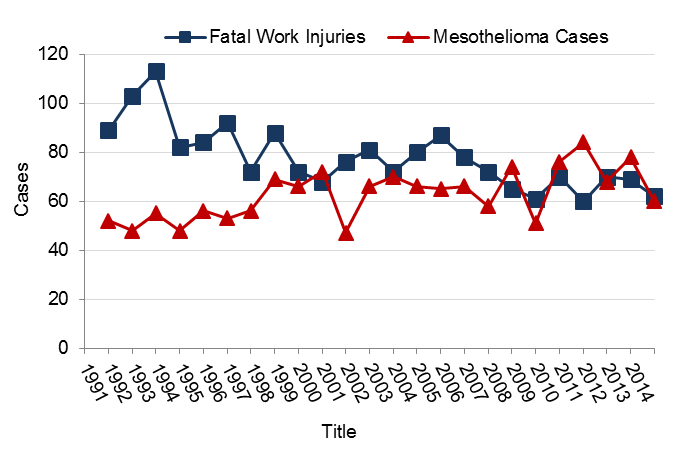 Trend analysis reveals that between the years 2000 to 2014 the incidence rate of malignant mesothelioma in Minnesota has neither increased nor declined. National data from 18 SEER cancer registries indicate no change in rates among females and a small but statistically significant decline among males of 1.3% per year during the period 2000-2014. Despite the dramatic decline in asbestos use in the U.S since the early 1970s (down from 800,000 metric tons in 1973 to 406 tons in 2014) and implementation of more protective occupational health standards, asbestos remains present in millions of homes, offices, and industries and represents an ongoing potential exposure hazard to both workers and the public. The continued tracking of this disease will be necessary to ensure that prevention measures have been successful and to identify any emerging hazards or at risk populations.

Return to Indicators of Occupational Health and Safety