Lyme disease is a bacterial infection caused by Borrelia burgdorferi, a spirochete transmitted to humans by bites from I. scapularis (the blacklegged tick or deer tick) in Minnesota. In Minnesota, the same tick vector also transmits the agents of babesiosis, Anaplasmosis, one form of human ehrlichiosis, and a strain of Powassan virus. 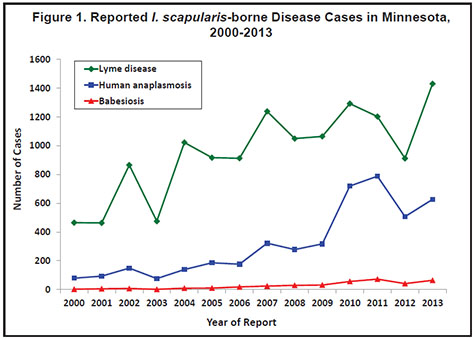 Nine hundred seventeen (64%) confirmed cases in 2013 were male. The median age of cases was 42 years (range, 1 to 88 years). Physician-diagnosed erythema migrans (EM) was present in 1,083 (76%) cases. Three hundred eighty-one (27%) cases had one or more late manifestations of Lyme disease (including 238 with a history of objective joint swelling, 117 with cranial neuritis, 15 with lymphocytic meningitis, 13 with acute onset of 2nd or 3rd degree atrioventricular conduction defects, 9 with radiculoneuropathy, and 1 with encephalomyelitis) and confirmation by Western immunoblot (positive IgM ≤30 days post-onset or positive IgG). Of the 1,338 cases with known onset dates, onset of illnesses peaked from June through August, with 40% of EM cases experiencing symptom onset in July. This timing corresponds with peak activity of nymphal I. scapularis ticks in mid-May through mid-July. The majority of cases in 2013 either resided in or traveled to endemic counties in north-central, east-central, or southeast Minnesota, or Wisconsin.