Lyme disease is caused by Borrelia burgdorferi, a spirochete transmitted to humans by bites from Ixodes scapularis, the blacklegged tick. Recently, a new species, B. mayonii, has also been identified as a cause of human disease, and 10 cases have been reported in Minnesota residents since 2013, 1 in 2019. In Minnesota, the same tick vector also transmits the agents of babesiosis, human anaplasmosis, one form of human ehrlichiosis, and a strain of Powassan virus.

Of the confirmed Lyme disease cases reported, 551 (60%) cases were male, and the median case age was 48 years (range, 2 to 90). Physician-diagnosed erythema migrans (EM) was present in 650 (71%) cases. Three hundred fifteen (34%) cases had one or more late manifestations of Lyme disease (including 231 with a history of objective joint swelling, 69 with cranial neuritis including Bell’s Palsy, 4 with lymphocytic meningitis, 15 with acute onset of 2nd or 3rd degree atrioventricular conduction defects, and 7 with radiculoneuropathy) and confirmation by Western immunoblot (positive IgM ≤30 days post-onset or positive IgG). Of the 840 cases with known onset dates, onset of symptoms peaked from June through August, with 65% of EM cases experiencing symptom onset in June or July. This timing corresponds with peak activity of nymphal I. scapularis ticks in mid-May through mid-July. The majority of cases either resided in or traveled to endemic counties in north-central, east-central, or southeast Minnesota, or Wisconsin. 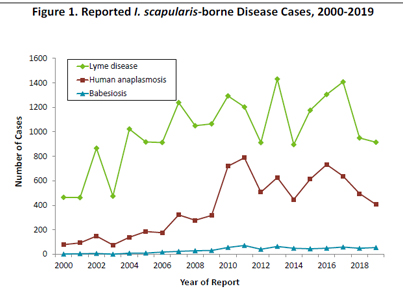