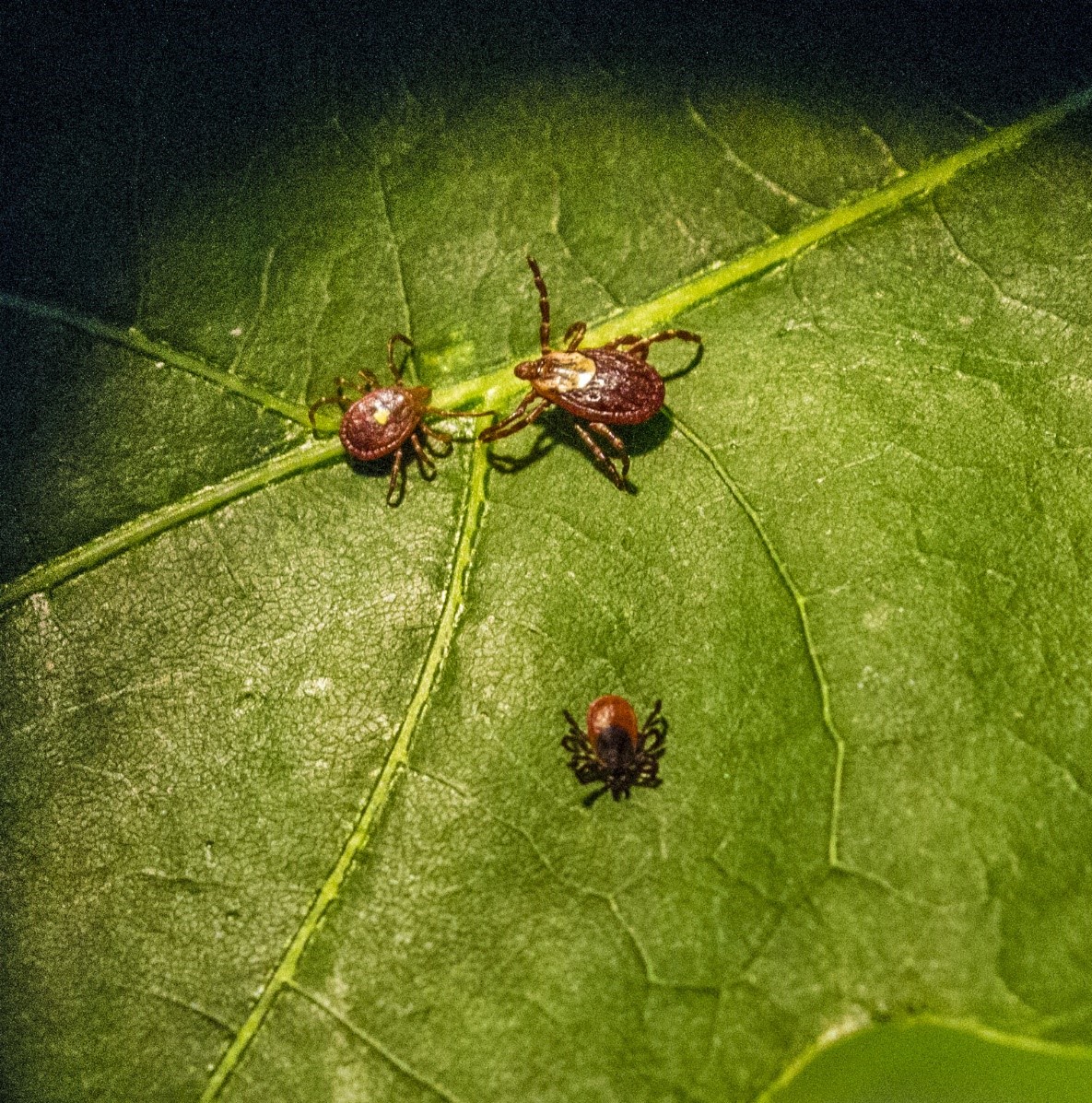 Blacklegged ticks live for about two to three years. Most of their life is spent out in the environment rather than on a host or in a host’s nest. During their entire lifetime, they will only have up to three blood meals. The picture below shows that the life cycle begins when the female lays eggs. As the egg matures, it develops into a larva (right-middle), then a nymph (top-middle) and finally, an adult male or female (bottom-right). 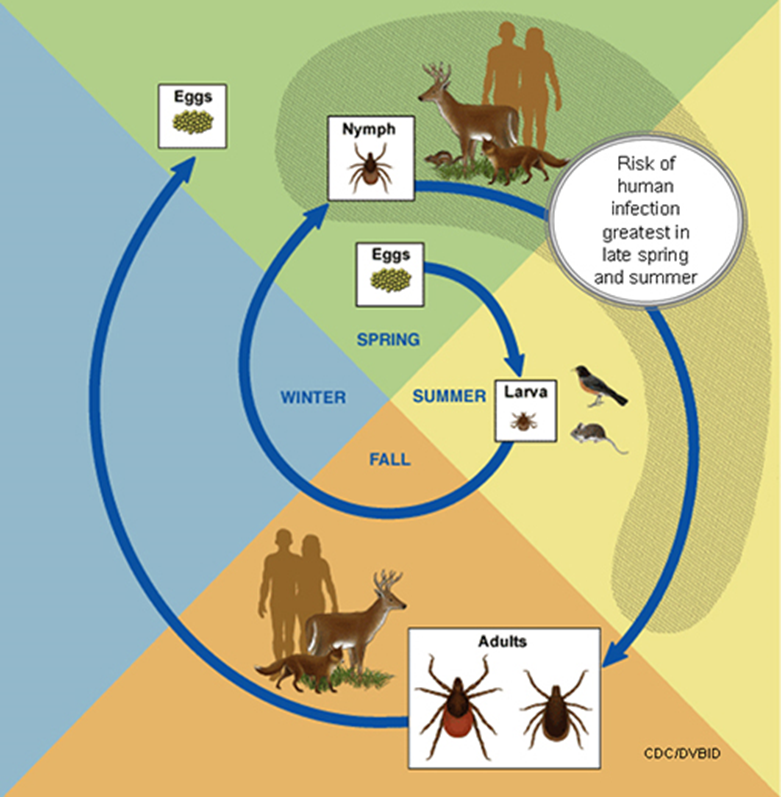 In the spring of their first year, eggs hatch into larvae. Larvae prefer to feed on blood from small mammals, like mice and birds. Larvae have one feeding then molt into nymphs and rest until the next spring. During this first meal, the larva may pick up a disease agent (like the bacteria that causes Lyme disease) while feeding on a small mammal, such as a white-footed mouse.

Late in the spring of their second year, nymphs take their second feeding. Nymphs aren’t as picky with their choice of host and will feed on blood from small or large mammals, such as white-tailed deer or humans. At this time, if the nymph is infected with a disease agent then it could spread the disease agent to a human or animal that it feeds on.

In the fall of their second year, nymphs that have had a blood meal will molt into an adult male or female tick. Adults prefer to feed on large mammals, such as white-tailed deer or humans. The females find a host to feed, mate with an adult male tick, lay hundreds to thousands of eggs, and then die. The males attach to a host to find a female mate and then die. Some adults who do not feed or mate in the fall will survive through the winter and then come out to feed and/or mate the following spring. If there is little to no snow cover and temperatures rise above freezing, it is possible to find an active adult tick searching for a host on a warm winter day.

In Minnesota, adult ticks will usually emerge right after the snow melts and reach peak spring-time activity during the month of May. The adult ticks will typically stay active throughout June. Adults will also become active again in the fall, usually by the end of September and through October, until temperatures drop below freezing or snow covers the ground. Blacklegged tick nymphs start to become active in mid-May and reach peak activity at the end of May through the month of June. Nymph activity tapers off slowly, and they are much less active by the end of July. Larvae are typically most active in June. 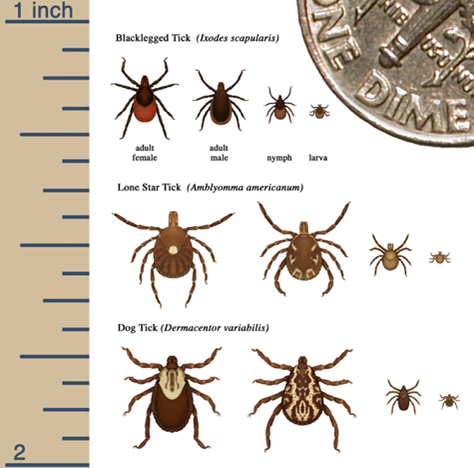 WATCH: How a Tick Digs Its Hooks Into You
Watch this video from National Public Radio on how ticks latch on.

Where do we find blacklegged ticks? 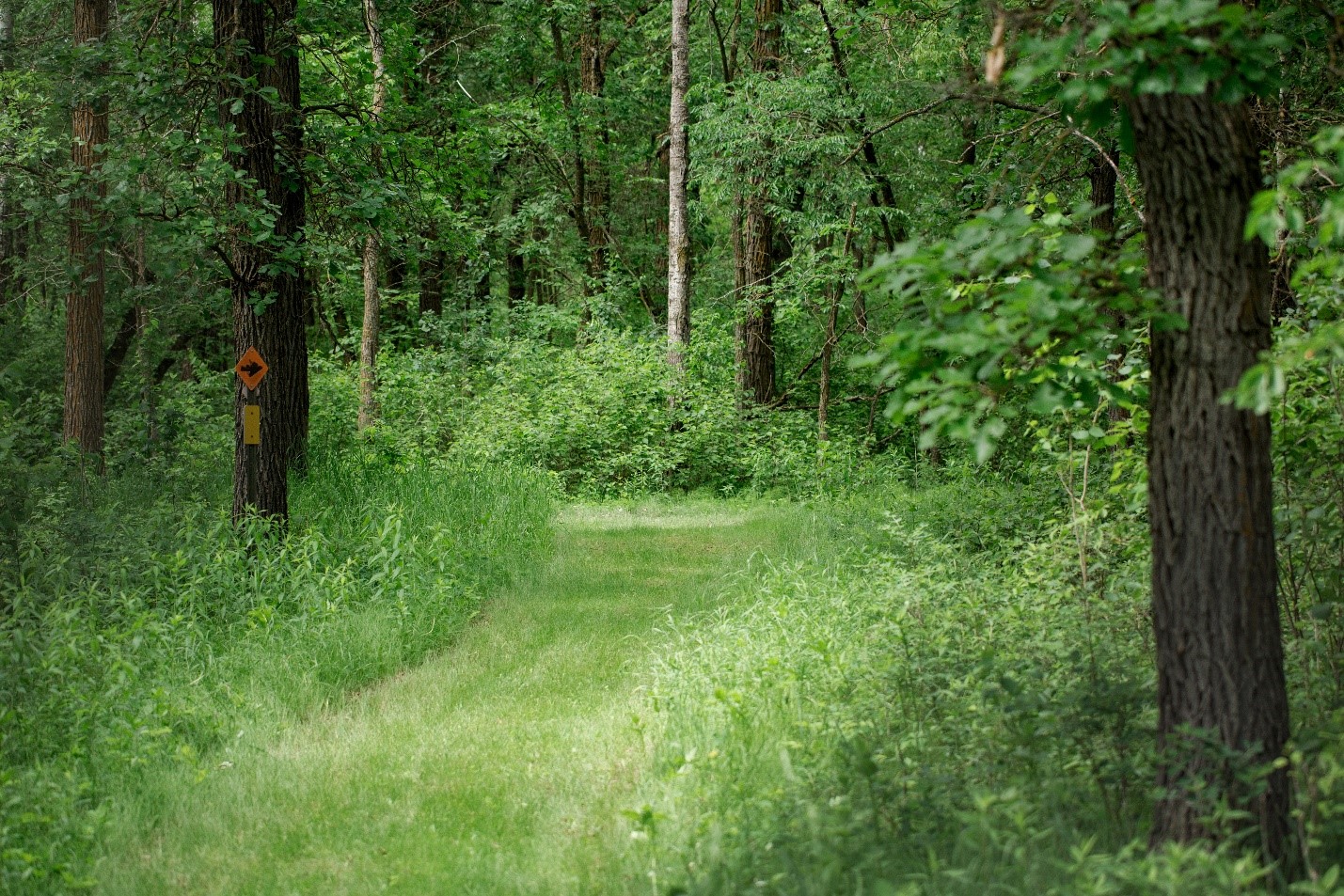 Blacklegged ticks thrive in wooded and brushy habitat like this. Try to stay on the mowed trail while walking through here in order to reduce your risk of tick bites. 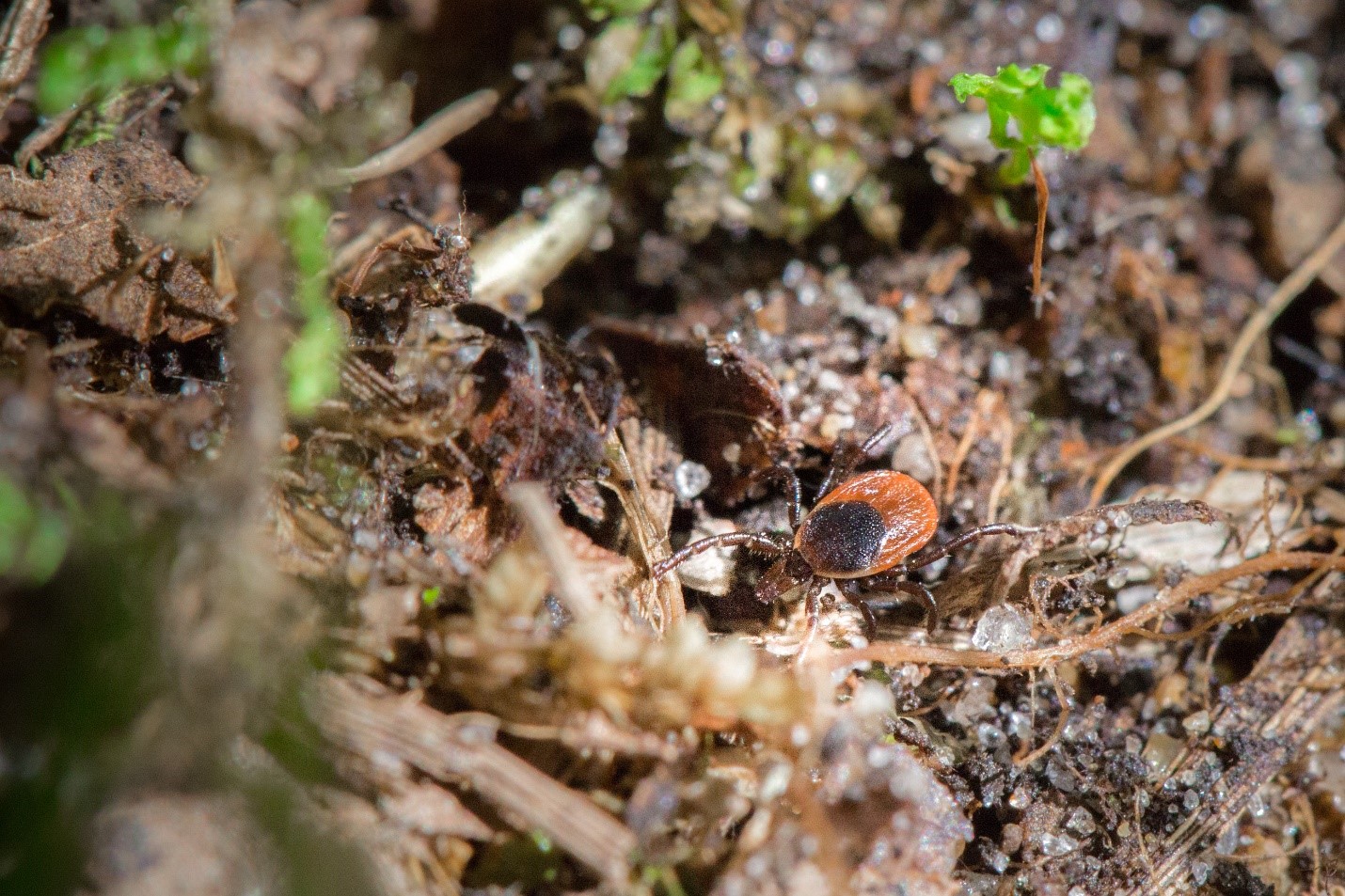 Blacklegged ticks spend most of their life on the ground, under the leaf litter layer of the forest. This is an adult female blacklegged tick that we found in her usual habitat. 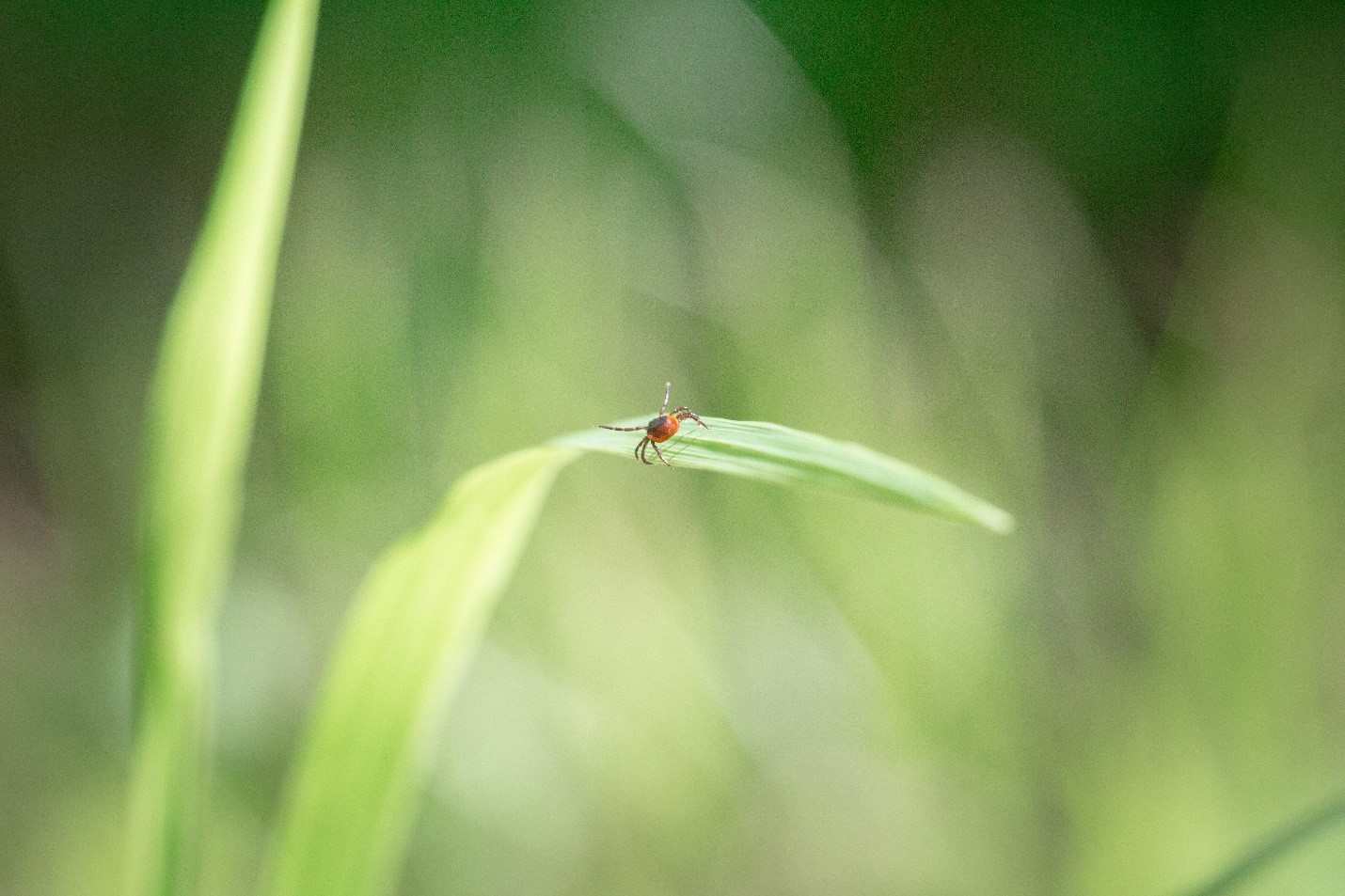 This adult female blacklegged tick can be identified by the reddish-orange coloring on her back. We caught her “questing”, a behavior by which the tick holds out its two front legs and waits for an animal or person to brush by so that it can grab onto a host. 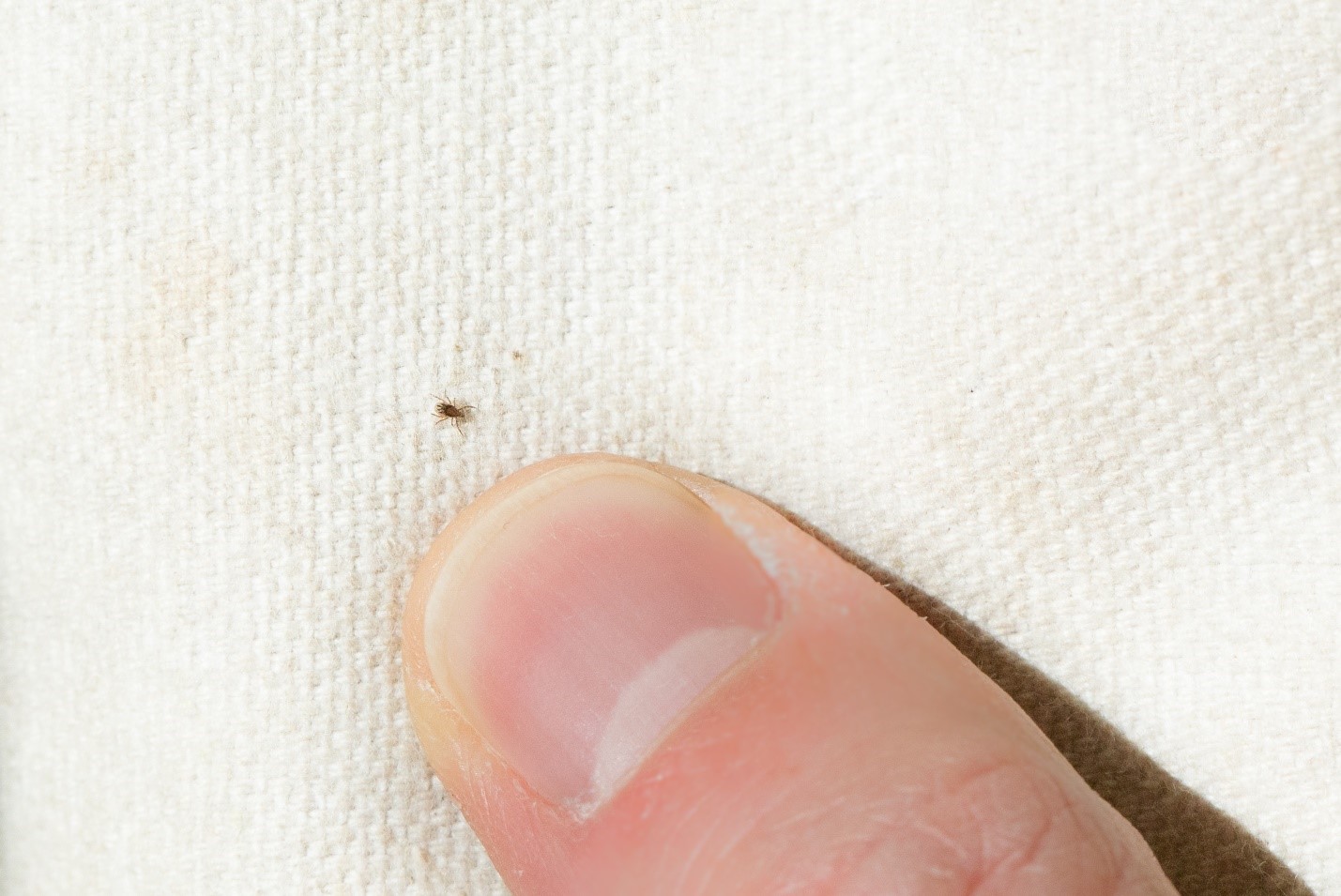 Look how small this blacklegged tick nymph is compared to the thumbnail. We found it on a drag cloth while we were collecting ticks out in the woods. 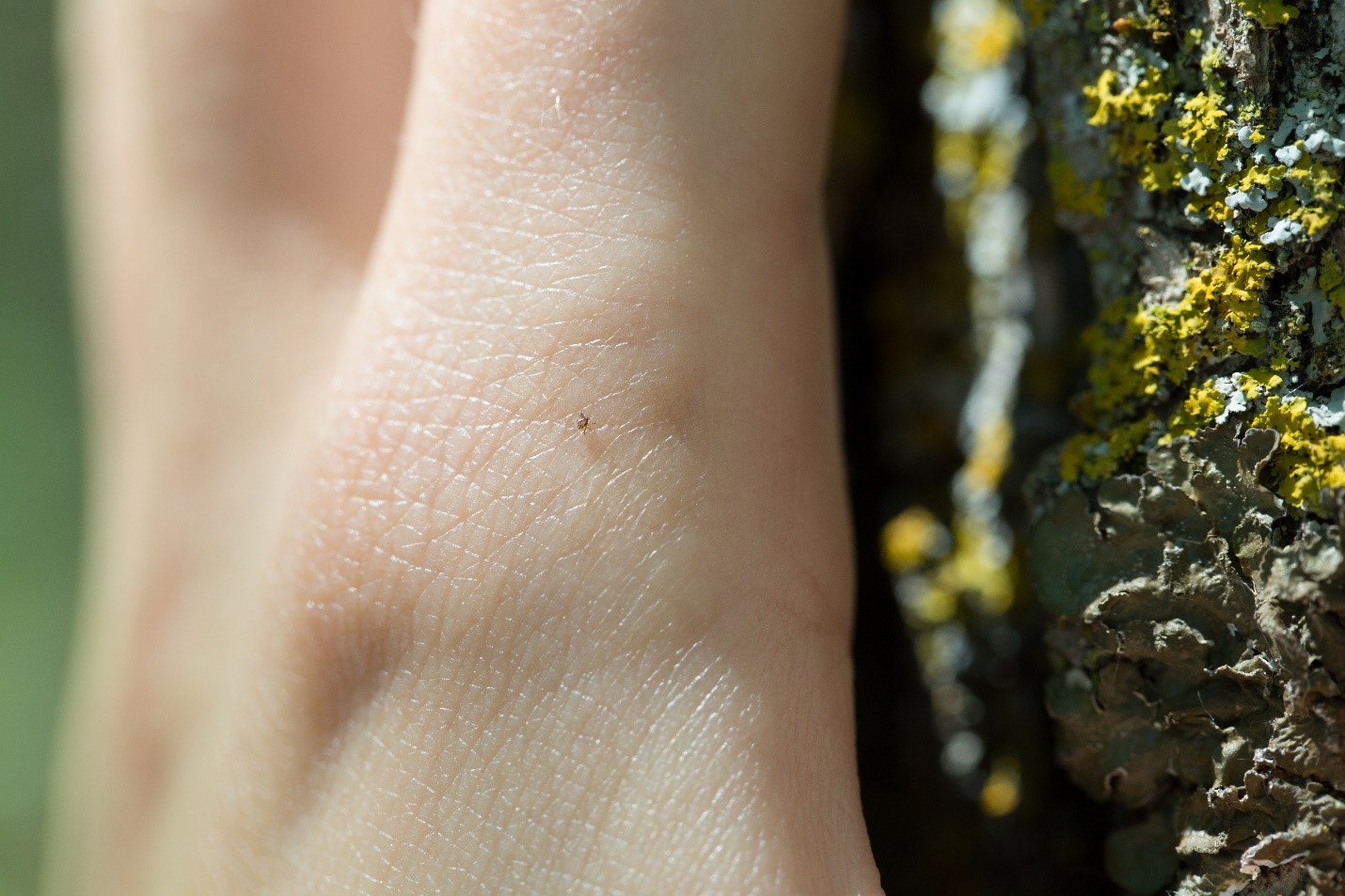 Can you find the tiny blacklegged tick larva near the knuckle of this hand? Larvae are the smallest life stage of tick that develop from eggs. 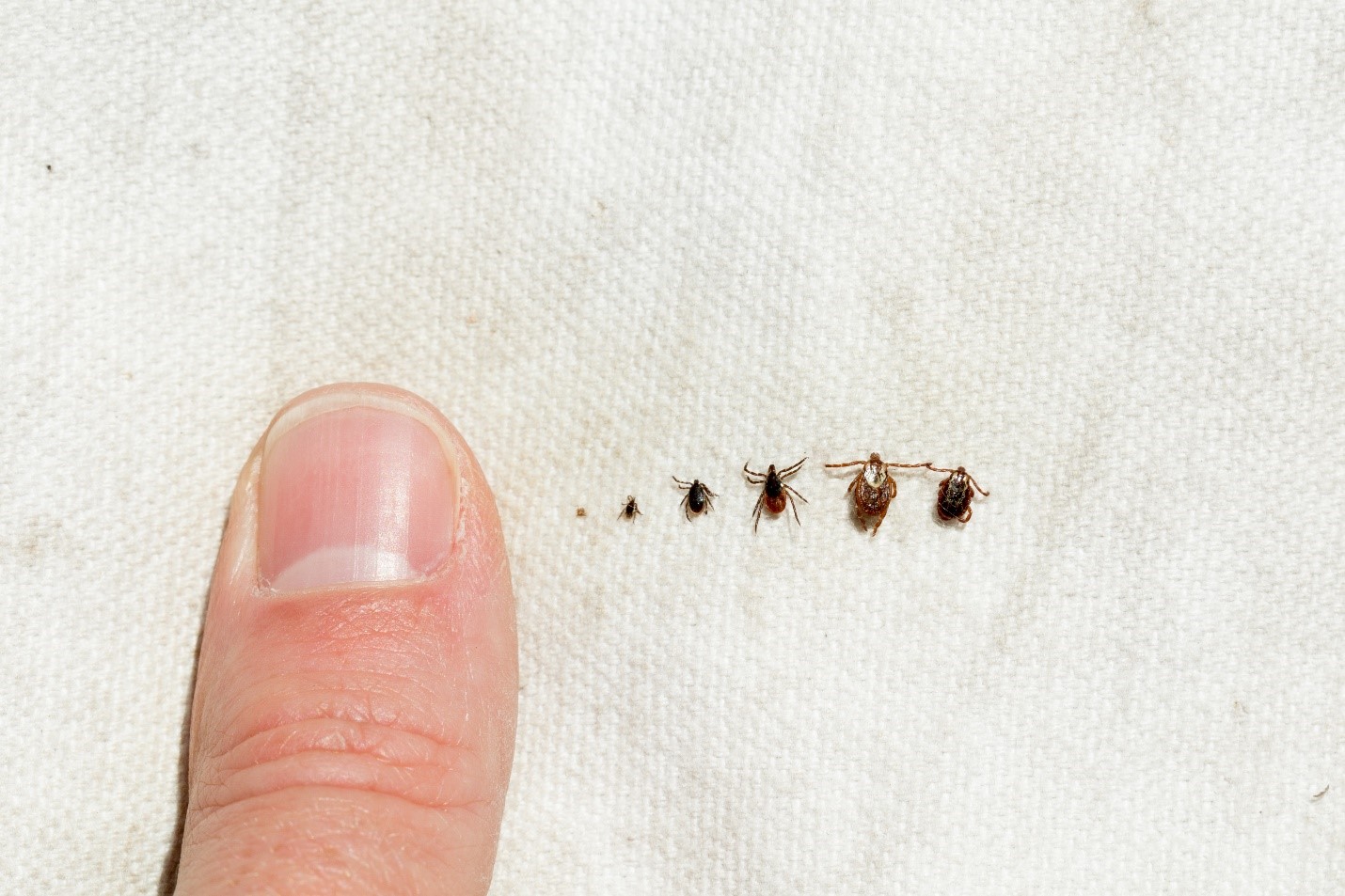 These ticks have been lined up next to the thumb so you can see their relative sizes. From left to right are the blacklegged tick (deer tick) larva, nymph, adult male, and adult female followed by the American dog tick (wood tick) adult female and adult male. 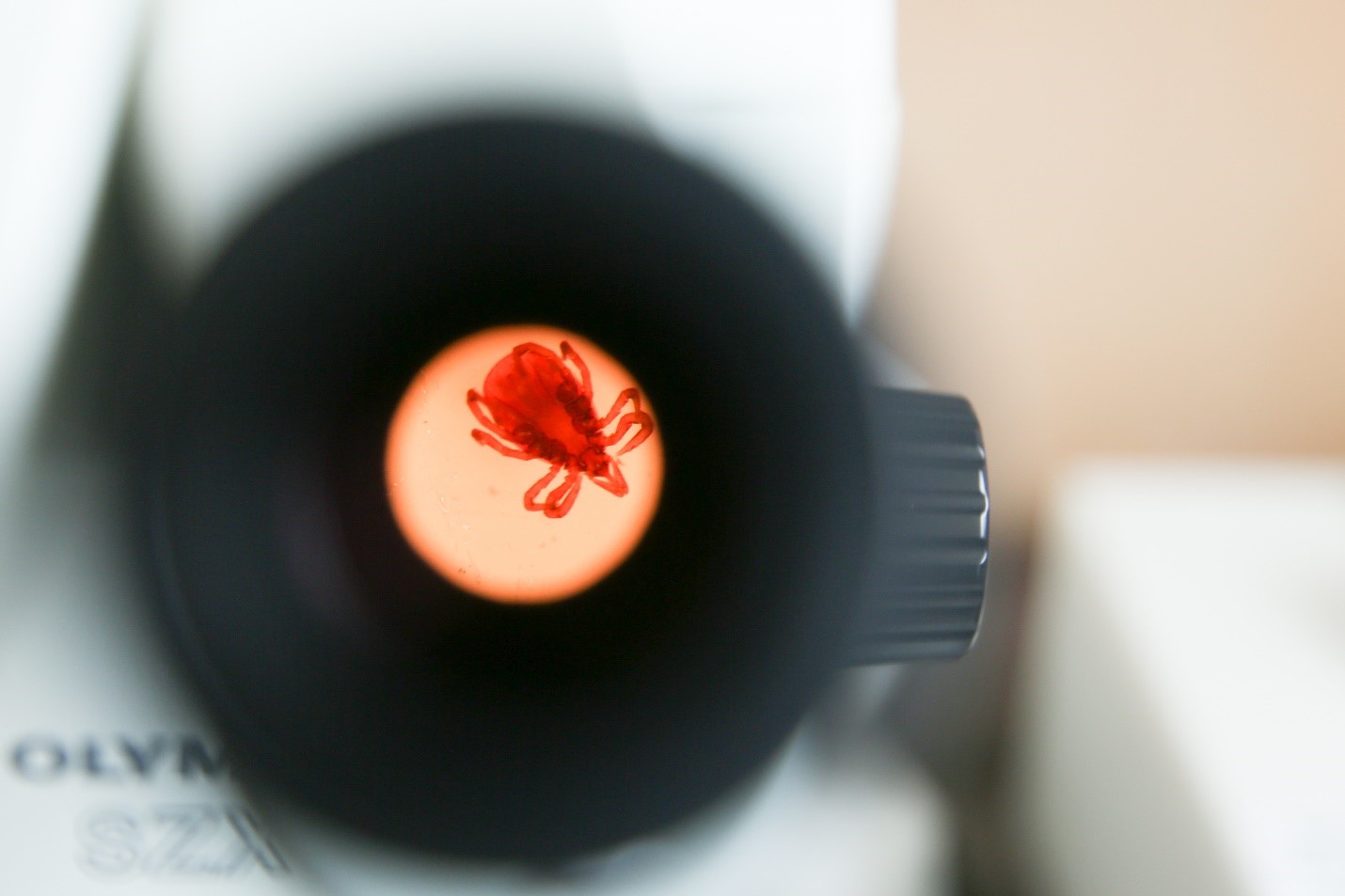 After ticks are collected out in the field, they are brought back to the office for identification under the microscope. This picture focuses on a blacklegged tick nymph – its large mouthparts are important for biting and staying attached to a host for the entire feeding period, which usually lasts 3-5 days. 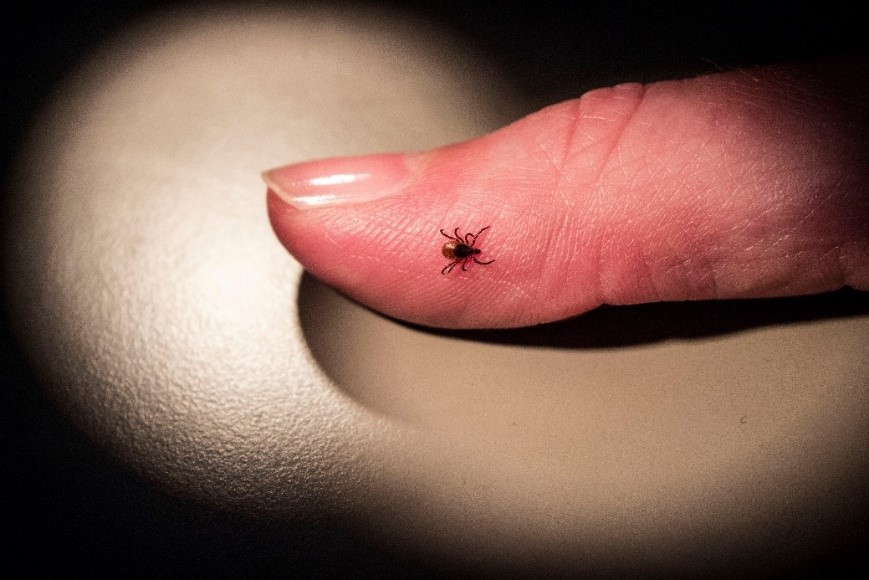 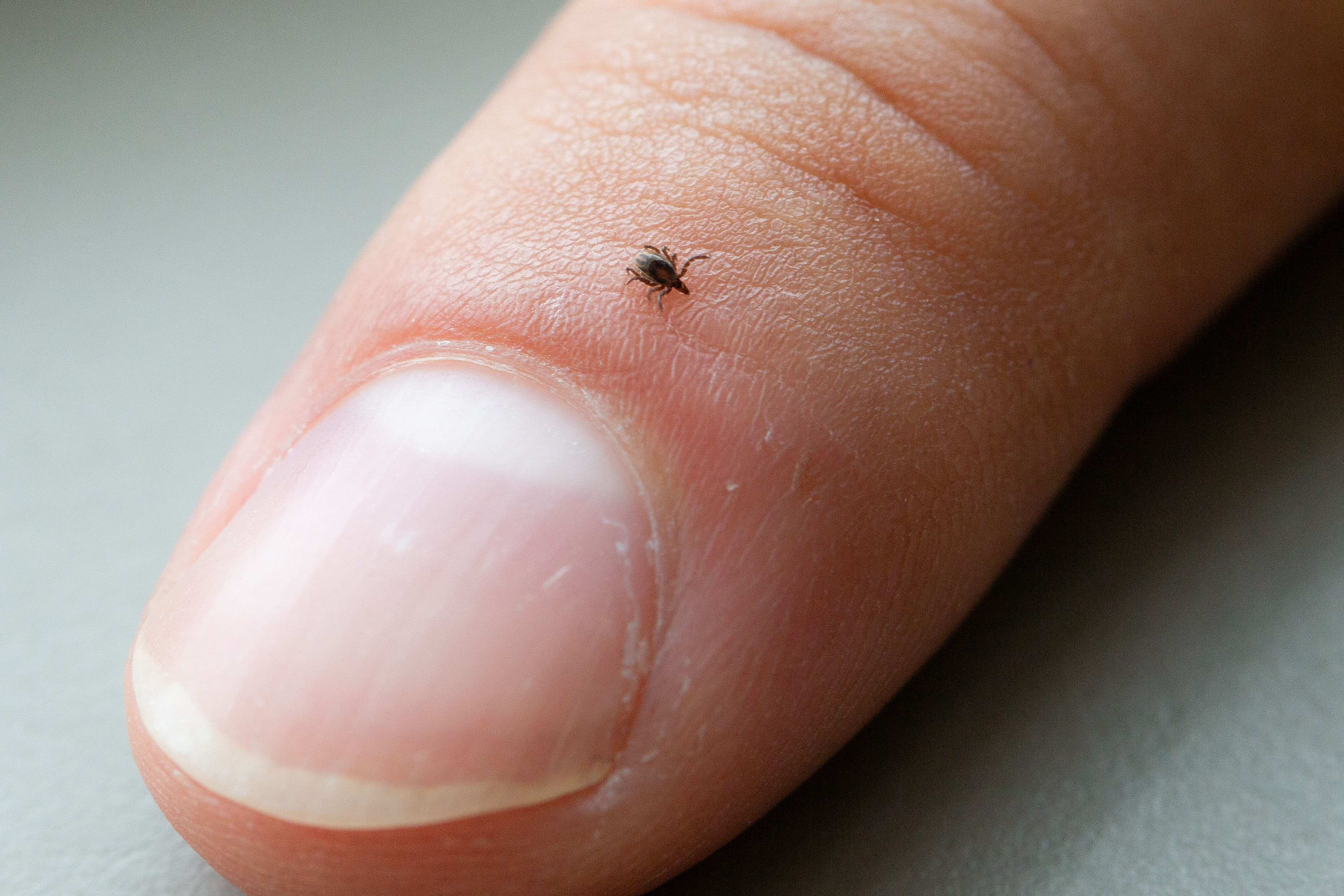 This picture shows a blacklegged tick nymph near a fingernail. Nymphs are smaller than adult ticks and are about the size of a poppy seed. 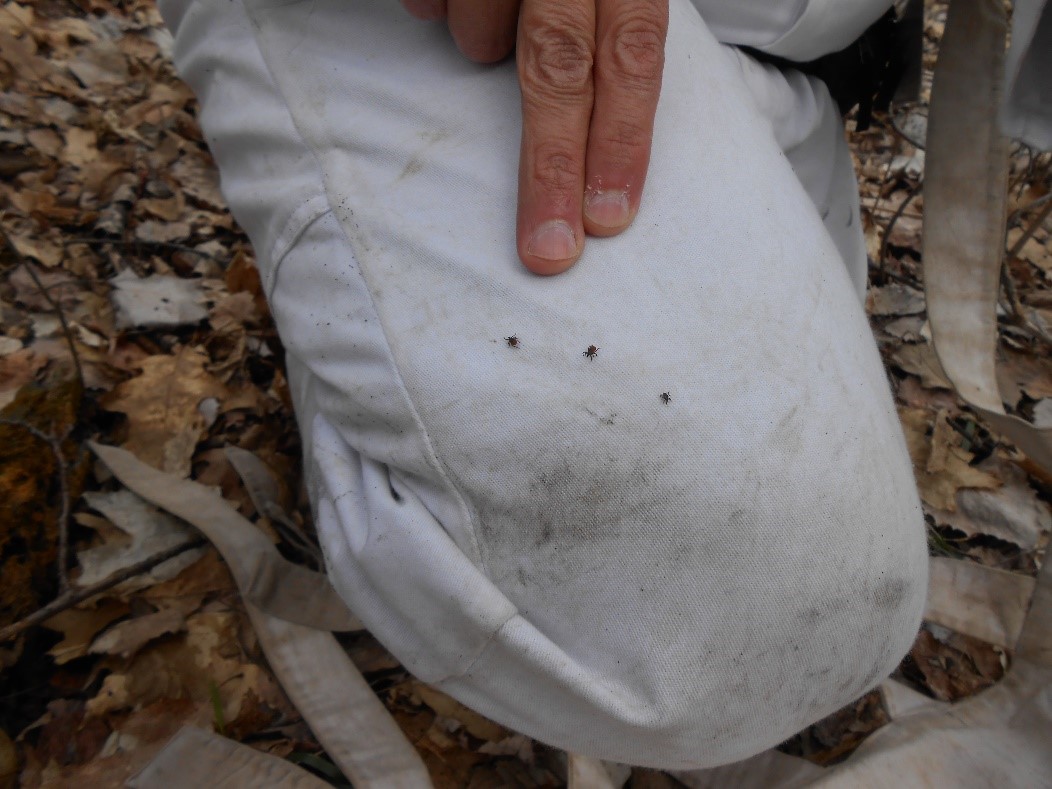 Check out our new video series: All About Ticks.

Tick Monitoring
Do you have a tick that you want to be identified?