The rulemaking process is governed by Minnesota Statutes, chapter 14, and Minnesota Rules, chapter 1400. This is a short summary of the main parts of the process, important documents, and time line for developing and adopting rules. 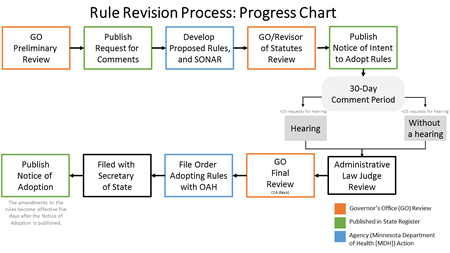 Statement of Need and Reasonableness (SONAR)
The Departments are required to justify that each rule requirement is needed and reasonable. “Needed” means that there are problems or a legislative directive that requires us to adopt or amend rules. “Reasonable” means that a proposed requirement is a reasonable solution to a problem. The justification will be in a document called the Statement of Need and Reasonableness (SONAR). Along with our analysis of each requirement in the rules, the SONAR also sets out our statutory authority for the rules and contains a modified cost/benefit analysis.

Review of Proposed Rules
The Revisor of Statutes will review the rules draft and edit, as necessary, for form and style.

Rules Hearing
If there are 25 hearing requests, the department is required to hold a hearing on the rules before an Administrative Law Judge (ALJ).

Review by Administrative Law Judge
Whether or not there is a hearing, an ALJ review the proposed rules and all the documents from the rulemaking. The ALJ will approve the rules if the Departments have statutory authority for the rules, have shown the rules to be needed and reasonable, have given proper notice of the proposed rules, and has complied with all other rulemaking requirements.

Governor Final/Veto Review
After the rules are adopted by MDH and approved by the ALJ, the Governor has 14 days to review them. The Governor may veto the rule amendments or let them become effective.

Effective Date
The amendments to the rules become effective five days after the Notice of Adoption is published.

This process of drafting amendments to the rules can be open-ended and we do not know when we will have a draft rule.

For questions or comments
regarding the possible rule amendments,
or to submit comments or information please contact: