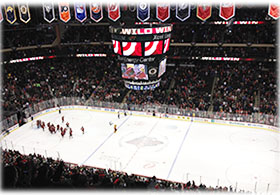 The Minnesota Department of Health (MDH) regulates air quality in Minnesota’s indoor ice and motorsports arenas. All such enclosed sports arenas in the state are required to obtain certification from MDH, ensure trained attendants, and keep records. Those facilities that use combustion-powered engines or equipment need to monitor the air for carbon monoxide (CO) and nitrogen dioxide (NO2).

Indoor ice arenas are a concern due to the equipment used to maintain the ice. Arenas use resurfacing machines to maintain a smooth ice surface. Usually, facility staff also use a device known as an edger to remove excess ice that accumulates near the boards of a skating rink. Both of these devices are often powered by a combustion engine. In motorsport arenas combustion powered vehicles like motorcycles, go-carts and “monster trucks” are demonstrated or raced  indoors. All of these engines are capable of emitting both carbon monoxide and nitrogen dioxide gas.

Combustion powered engines- those that operate on gasoline, propane, diesel or natural gas- emit byproducts that can create hazardous indoor environments. Minnesota’s Indoor Ice Arena and Indoor Motorsports Arena rules focus on carbon monoxide (CO) and nitrogen dioxide (NO2). Carbon monoxide is an odorless, colorless gas that humans are unable to detect until they become ill. When people are exposed to CO gas, it interferes with normal oxygen uptake and leads to symptoms including headaches, dizziness and confusion. Nitrogen dioxide (NO2) is a highly reactive oxidant and corrosive gas that can irritate the eyes, nose, throats and lungs of arena users. Exposure to NO2 can also lower resistance to respiratory infections and aggravate asthma.

Indoor ice and motorsports arena users may be susceptible to health concerns from CO and NO2. Individuals who are exercising are breathing faster and deeper, which brings in more air and contaminants into their lungs. Also, many arena users are children who are more at risk due to their body size, higher breathing rate and developing organs

Minnesota was the first state to implement rules in 1973 to protect arena users, after exposures to exhaust emissions from resurfacing machines caused illnesses in spectators and hockey players. In 1977, the rules were expanded to include all enclosed sports arenas where internal combustion powered engines are used for recreation, completion or demonstration. In 2013, the rule was revised to better protect public health.