Skip to Content
Ashley's Story - My Decision to Immunize - Minnesota Dept. of Health

Me and My Family

Ashley's Story - My Decision to Immunize 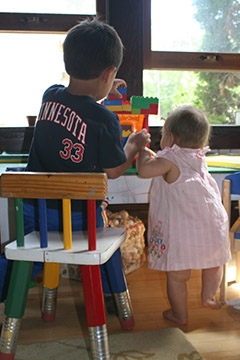 As a former environmental journalist and mother of two, it seemed that my life had become a never-ending series of self-taught courses in statistics, public health, and immunology. Breastfeeding versus bottle, chemicals in crib mattresses, lead in toys, and so on. Like nearly every new parent, I also wanted to know all I could about the vaccines my child would be receiving.

My first forays into the world of vaccines was downright terrifying. Even with my journalistic background, I found it very difficult to distinguish between propaganda and hard science during my Internet searches. Organizations with very official, objective-sounding names providing horrifying anecdote and scientific-sounding information turned out upon closer inspection to be groups of people determined to keep me from vaccinating my child. They offered lists of dangers that I could not substantiate with any peer-reviewed science; still, the stories alone were enough to scare me, even if there was nothing convincing to link them to vaccines. Then other parents began telling me they weren’t vaccinating their children—or were “spacing them out”—and I thought, well, what harm would it do to delay my son’s MMR vaccine? “Just to be sure,” I told myself.

Five years later, I have never forgiven myself for putting my son’s life at risk for those months. In the baldest terms possible I had put my son’s life on one side of the scale and fear of a nonexistent link between vaccines and autism or other disorders on the other, and I chose fear. The question I posed to myself during one sleepless night was whether I’d ever be able to forgive myself if my son contracted a vaccine-preventable disease because I’d believed a lie. The answer was simple. I scheduled my son’s shot the very next day.

What I later found out was that the consensus on the safety and efficacy of vaccines in the scientific community is as close to absolute as you can get in science. Put in other terms, there is more disagreement among scientists about whether or not climate change is man-made than about whether vaccines cause autism—that is considered a closed debate. What I’m still trying to shake is my anger. I am angry I was lied to as a new parent. I am angry that manipulated statistics, false correlations, and other tricks used by people who do not have science on their side in a scientific debate led me to make a dumb decision. I’m angry at myself for not knowing better. But I take great comfort in the fact that science has shown—again and again and again—the vaccines do not cause the harm they’ve been accused of causing. I take comfort in the fact that, as a parent, I have the opportunity to protect my children from deadly disease, and, at the same time, protect other vulnerable babies and children in my community. I care about all the children in my community, not just mine—which is why I vaccinate.

Free or Low-Cost Shots for Children