The care continuum, sometimes referred to as treatment cascade, is a calculation of how many Minnesotans diagnosed with HIV are initially linked to care, retained in care (receiving HIV medical care in 2019), and achieved viral suppression. It is an important tool in measuring the successes of the National HIV/AIDS Strategy in Minnesota.

Health care providers in Minnesota typically only do one lab test per year for patients whose HIV infection is well managed. We are able to get a better sense of HIV care in Minnesota using one lab test for the ‘retention in care’ data point, instead of two lab tests that the CDC usually publishes in their care continuum.

It's important to remember that this data is a point in time and not cumulative. It is a snap shot of how HIV positive peoples' clinical care occurred in a given year by their final reported lab value for the year. We have been calculating the care continuum since 2013. Below is the summary of the 2019 care continuum for people diagnosed through 2018.

The goal of HIV treatment is to achieve viral suppression, meaning the amount of HIV in the body is very low or undetectable. This is important for people living with HIV to stay healthy and live longer. We also know that people living with HIV who get and stay virally suppressed can't pass HIV to their sex partners. Learn more at Undetectable = Untransmittable (U=U).

Percentages of people with HIV engaged in selected stages of the continuum of care, 2019 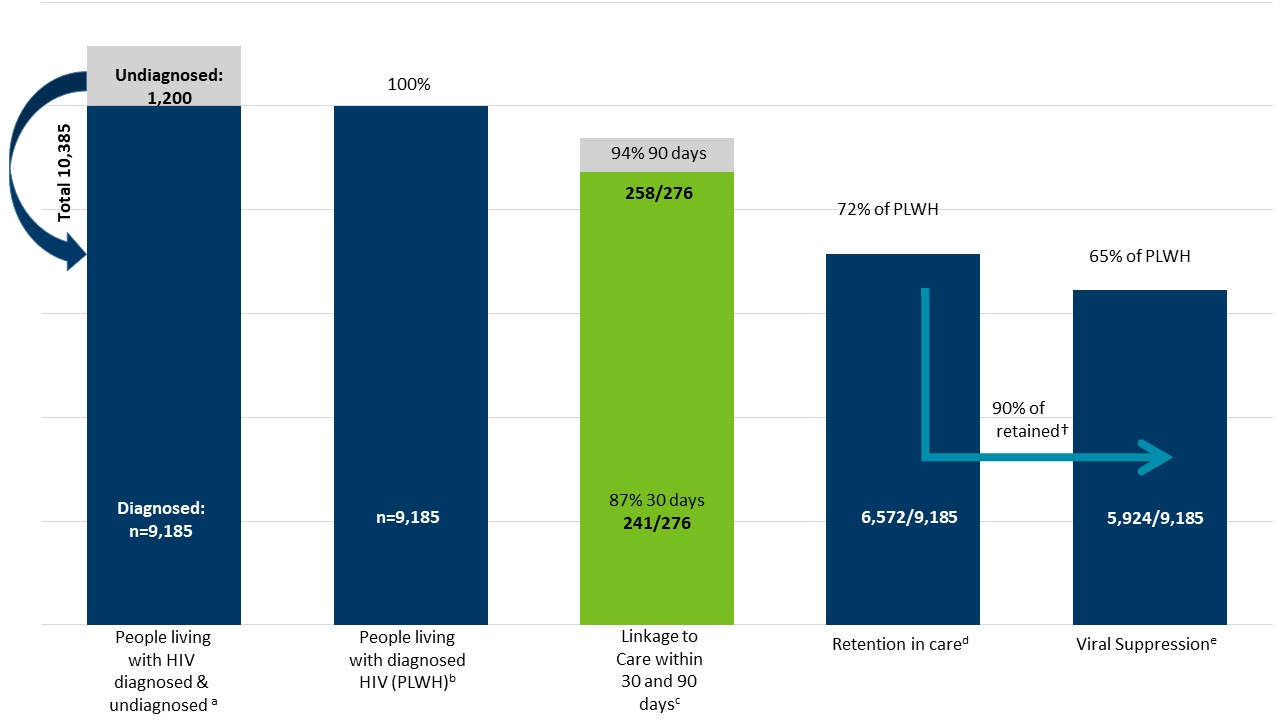 bDefined as people diagnosed aged 13 or more with HIV infection (regardless of stage at diagnosis) through year-end 2018, who were alive at year-end 2019.

cCalculated as the percentage of people linked to care within 30 and 90 days after initial HIV diagnosis during 2018. Linkage to care is based on the number of people diagnosed during 2018 and is therefore shown in a different color than the other bars with a different denominator.

dCalculated as the percentage of people who had ≥1 CD4 or viral load test results during 2019 among those diagnosed with HIV through year-end 2018 and alive at year end 2019.

eCalculated as the percentage of people who had suppressed viral load (≤200 copies/mL) at most recent test during 2019, among those diagnosed with HIV through year-end 2018 and alive at year end 2019