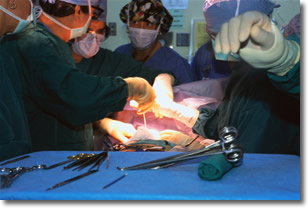 In 2003, Minnesota became the first state in the nation to establish a mandatory adverse health event reporting system that included all 27 serious reportable events identified by the National Quality Forum and a public report that identified adverse events by facility. The law covers Minnesota hospitals and licensed outpatient surgical centers.

Momentum toward a system for mandatory adverse event reporting began with the publication of the Institute of Medicine (IOM) report “To Err is Human” in 1999. While the issue of medical errors was not a new one for health professionals, Americans reacted strongly to the idea that preventable errors could contribute to the deaths of up to 98,000 people per year. The public and media attention that followed the report’s publication started a national conversation about the reasons why such errors occur. A primary focus of the discussions was the concept of systemic causes for errors.

In the past, discussions of medical errors often focused on identifying and punishing those who had caused the error. While individual accountability for behavior that could put patients at risk is very important, the IOM report confirmed that most errors were not the result of the isolated actions of any one care provider, but rather of a failure of the complex systems and processes in health care. Given that knowledge, the old ‘blame and train’ mentality, wherein individual providers were blamed for mistakes and provided with training in the hopes of preventing future slip-ups, has to make way for a new approach that encompasses a broader view of accountability and learning from errors or near misses.

Every facility has processes for dealing with individual providers who exhibit dangerous or inappropriate behavior or who knowingly put patients at risk. Disciplining, educating or dismissing an individual provider will always be an option in those cases. But the focus of the reporting system is on using focused analysis of events to develop broader opportunities for education about patient safety and best practices – solutions that can be applied across facilities. Responses focused on an individual provider may or may not prevent that provider from making a mistake again but changing an entire system or process to eliminate opportunities for error, whether by building in cross-checks, establishing a ‘stop the line’ policy, or using automation to prevent risky choices, will help to keep all patients safer.

From the beginning, the reporting system has been a collaborative effort. Health care leaders, hospitals, doctors, professional boards, patient advocacy groups, health plans, MDH, and other stakeholders worked together to create the reporting law, with a shared goal of improving patient safety. The vision for the reporting system is of a tool for quality improvement and education that provides a forum for sharing best practices, rather than a tool for regulatory enforcement.

In 2012, the Adverse Health Care Events Reporting Law was modified to expand the definitions of several events, re-categorize several events, delete two events and add four additional events. Those changes went into effect with the 2014 reporting year. The four new events were:

At the same time the “serious disability” language was changed to “serious injury.” The reporting of these new events began on Oct. 7, 2013.