From extreme heat to ecosystem threats, real changes in Minnesota's climate are impacting the health of Minnesotans. Read through our Minnesota Climate and Health Profile Summary (PDF) for a little more detail.

While climate change impacts everyone, certain populations are more vulnerable to the health impacts of climate change. Vulnerability means the characteristics of a person or group and their situation that influence their capacity to anticipate, cope with, resist and recover from the impact of a natural hazard of other climate hazard. Learn more in our Minnesota Climate Change Vulnerability Assessment Summary (PDF).

Changes in Our Atmosphere Lead to Health Effects 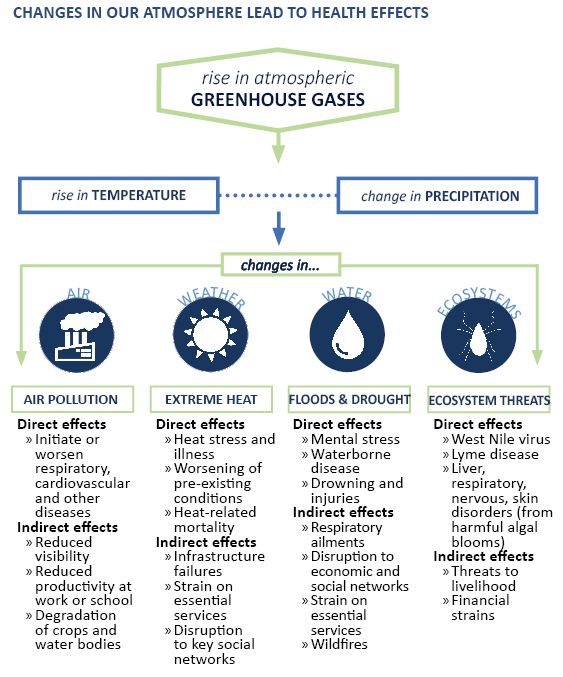 While many measures of dew point and humidity in Minnesota do not yet show evidence of increasing, the most extreme dew point values are becoming more frequent and more extreme over time. Based on historical data, annual maximum dew point temperatures (measured at 6:00PM CST) are increasing in Minnesota. 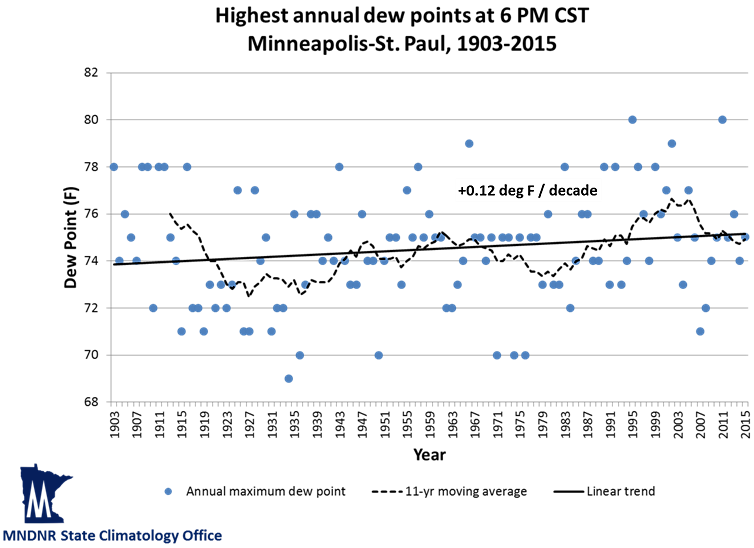 All of these atmospheric influences (GHG emissions, temperature, precipitation, humidity) are directly or indirectly causing disruptions in four key aspects of the human environment—air, weather, water, and ecosystems. Changes in these areas are in turn leading to situations that threaten the health and vitality of human communities through increased air pollution, extreme heat events, floods, droughts and ecosystem threats. 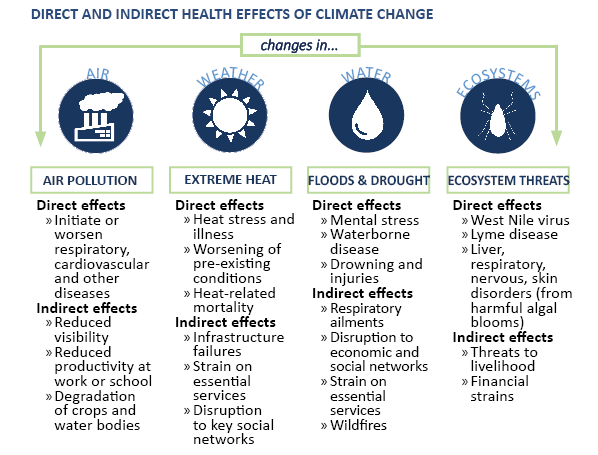 For example, increases in ambient air temperatures and humidity are predicted to increase the frequency, duration and severity of extreme heat events. Direct health effects from extreme heat include symptoms associated with heat stress, such as fatigue, cramps, headaches and nausea, or responses that are much more extreme, including heat stroke, organ failure, and even death.

In 2012, there were 1,715 emergency department visits and six deaths due to extreme heat. In addition, heat waves can exacerbate pre-existing medical conditions or diseases, such as diabetes, cardiovascular disease, chronic obstructive pulmonary disease, kidney ailments and mental or behavioral disorders. Indirect health effects from extreme heat include infrastructure failures like power outages; disruption of some occupations (especially those involving outdoor, strenuous labor), schooling, or major events, like athletic competitions or festivals; and a strain on emergency and health care services, in particular 911 response and emergency department operations.

Missed the session? View the webinar recording above or download a copy of the 2017 Climate and Health 101 Training Slides (PPT).

Subscribe to our Climate & Health e-newsletter to receive email updates