Populations of color and American Indians

Minnesota is growing increasingly diverse, necessitating an increase in culturally appropriate care for different racial and ethnic communities. Accessing culturally appropriate care can be a challenge for persons of color throughout the state, regardless of their age, race, ethnicity, first language, or place of birth. Minnesota's main racial/ethnic groups identified by the US Census bureau, aside from white, are African-American, American Indian, Asian, and Hispanic.

As a rule, Minnesota's urban areas are more diverse than its rural areas, but this is quickly changing as businesses and industries around the state recruit a more diverse workforce to Greater Minnesota. To find the population profile for your specific county, as well as other health outcome information, visit: Minnesota County Health Tables.

Many of Minnesota's populations of color and American Indians lack the same opportunities to be healthy because of factors such as economic instability, unsafe neighborhoods, and inadequate access to health care. These differences ultimately result in poorer health outcomes, shorter life spans, higher health care costs, and lost productivity.

Given the growing racial and ethnic diversity of Minnesota, these disparities are of increasing importance and urgency. Minnesota's populations of color and American Indians have grown from just over 6 percent of the total population in 1990 to almost 17 percent in 2012. This growth adds people who bring talents, energies, skills, as well as their own languages, customs, diets, and health care practices not only to the Twin Cities but to communities across the state.

Working alongside populations of color and American Indians

Building relationships with diverse communities in your region relies upon the principles of listening and dialogue. It's important to understand, for example, the history of tribes and treaties in Minnesota, the conditions under which refugees come to Minnesota, and the systemic racism experienced by people of color and American Indians in Minnesota.

The health outcomes of all races and ethnicities in Minnesota are not only tied to factors such as access to health care and healthy behaviors, but also to community factors like high school graduation rates, unemployment rates, age distribution, home ownership, and a myriad of other social determinants of health. Socioeconomic status, which is so often correlated with race and ethnicity, plays a particularly important role in one's health. According to the Wilder Foundation's Health Inequities in the Twin Cities (PDF), health outcomes tend to be better in areas with higher household incomes, less concentrated poverty, and higher levels of income. Rather than focusing on medical care, a number of organizations are shifting their effort to intervene in these social determinants of health—factors that cannot be adjusted by a visit to the doctor, but instead come from other parts of our lives, like education and culture.

The Cultural Awareness Center of Minneapolis recommends an approach that takes into account how integral a community's common culture is to a person's and a group's health, called the People's Theory. Without a strong connection to one's community, an individual's health will fail. The Center recommends organizing local groups to provide health education that includes facilitating dialogue with and coaching from cultural elders; building kinship and cultural reconnection networks, and teaching culturally-based nutrition practices. Collaboration with community members and supporting communities in creating their own programming and interventions are vital to improving the community's health outcomes.

The People's Theory is grounded in the concept that individualism and loss of community and culture make us sick. This theory was developed by Minneapolis' Cultural Awareness Center after speaking with hundreds of people spanning a number of different cultural groups. By reconnecting to culture and community, the Center advocates, we can help counteract racial disparities in health, economic status, and education. 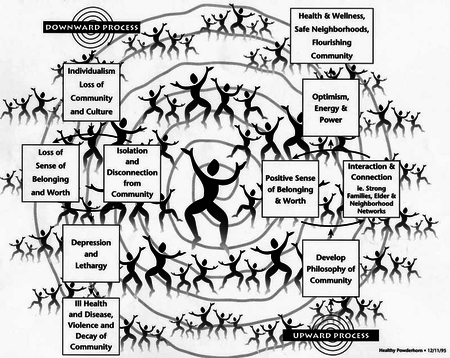 Health care is particularly expensive for African-Americans in the US, according to the National Urban League's 2012 State of Urban Health (PDF). In the Midwest, for example, African-Americans comprise 6.5 percent of the minority population, but account for 15.5 percent of minority spending on health care. Health disparities in the Midwest cause African-American Midwesterners to lose nearly $2 billion each year in lost productivity, compared with $600,000 for Hispanics and $400,000 for Asian Midwesterners.

Minnesotans identifying as Hispanic, Latino, and Chicano come from a various locations, and are born in the US as well as having emigrated here. According to the state's Chicano Latino Affairs Council (CLAC),

Latinos in Minnesota face the same health issues that other minority communities face. Such issues include affordable health care, preventative health, diet, immunization, and lack of seeking medical assistance. Additionally, another issue that Latinos face is culturally competent health care practices that have bilingual practitioners or practitioners culturally aware of the clientele.

In 2008, the Council on Asian Pacific Minnesotans and the Minnesota Asian/American Health Coalition held an Asian Health Disparities Forum to address the unique health needs of Minnesota's Asian communities. At the forum, both groups gathered stories centering on health access, promotion, data, conditions, issues, professions, and emergency preparedness; the forum was seen by the community as a way to inform city, county, state, and federal government officials about the health of Minnesota's Asian and Pacific Islander communities. Some interesting factors to note about this community, from the forum:

It is this religious and cultural diversity that greatly impacts the way some AAPI community members perceive their health, or what it means to be "healthy." Health may be seen as more holistic, and tied to one's spiritual and mental needs as much as his/her physical needs.

The Forum identified the following as most important to the AAPI community at the time: improving medical interpreter services, increasing health education, improving the availability of data on AAPI health specific to particular sub-populations, mental health (especially among Hmong, Lao, and Karen people), as well as obesity, domestic violence, and lack of emergency preparedness planning.

Minnesota's American Indian community is geographically, culturally, and spiritually diverse. Similarly, among American Indians, the ideas of "health" and "wellness" are broad, and may not just encompass one's own physical body, but be more holistic in nature. American Indians also have an especially unique relationship with local, state, and federal governments based in their history of treaties and sovereign rights, which are still very much at the forefront of how each party interacts with each other.

(For more information, visit Why treaties matter, a traveling exhibit exploring the relationships between Dakota and Ojibwe nations and the US government.)

Language is also integral to one's health and wellness, and especially so in Minnesota's American Indian communities, where the renewal of native languages is tied to increasing community strength, identity, and wellness. As stated in the 2011 Dakota and Ojibwe language revitalization in Minnesota: Report to the Legislature (PDF):

These languages embody irreplaceable worldviews. They express, reflect, and maintain communal connections and ways of understanding the world. Deeper than the disuse of vocabulary or grammar, the loss of an Indigenous language is destruction of a complex system for ordering the relationships among people and the natural world, for solving social problems, and connecting people to something beyond themselves.

The Ojibwe People's Dictionary, which seeks to help revitalize the Ojibwe language further, states, "The Ojibwe language is where we turn for philosophy, history, science, medicines, stories, and spirituality. It is our university and the key to our cultural survival." Without the language to adequately describe one's health inside of a world view, a person is rendered partly mute.

The health issues faced by Minnesota's American Indians are not unique, but are often experienced in greater proportion than in white communities and communities of color. Only 55 percent of American Indian people rely on Indian Health Services or tribally-operated clinics/hospitals for care; many access health care outside of the tribal system.

However, American Indian communities rely on a number of strengths when seeking to improve health outcomes:

When planning interventions with neighboring American Indian communities, it is extremely important to consult with local cultural advisors for questions about, for example, varying disease symptoms or culturally appropriate treatment options.

In addition to the resources listed throughout this chapter, MDH can help you find connections in your communities when it comes to working together on issues that impact minority health.

Healthy Minnesota framework: Healthy Minnesota is a framework for creating and improving health throughout the state of Minnesota, based on the statewide health assessment. The framework features three themes that reflect the importance of social and economic determinants for health: capitalize on the opportunity to influence health in early childhood; assure that the opportunity for health is available everywhere and for everyone, and strengthen communities to create their own healthy futures. The framework also identifies nine core indicators to monitor and provides examples of a range of strategies that relate to each of the three themes.

MDH statewide interpreter roster: Spoken Language, Health Care: The information in the roster is provided by each interpreter and has not been verified by the Minnesota Department of Health. At this time there are no qualifications that must be met to be included on the roster. Inclusion on the Roster is not evidence of being a "certified" health care interpreter. The roster can be searched to show: names, language, geographic area, and health care areas/specialty settings in which the interpreter may have work experience.

Why treaties matter: This traveling exhibit explores relationships between Dakota and Ojibwe Indian Nations and the US government in this place we now call Minnesota. Learn about relationships and context surrounding treaties, and what they mean today to American Indian Minnesotans.

Next: Working with advisory committees