Fires are serious threats to life and property due to the smoke, extreme heat, and chemicals they produce. In addition, a fire may directly or indirectly affect foods in ways that could endanger your health. The following food safety tips will help protect you and your family if your home is damaged by fire.

Is food safe after being in a fire?

Foods may appear fine after being near a fire but could be compromised in the following ways:

What should you do with food that was in or near a fire?

What if the fire causes the power to go off?

Special considerations are necessary to ensure the safety of foods in refrigerators and freezers.

The information in this document is intended as guidance for private consumers. Commercial licensed food establishments should consult the relevant regulations and/or their regulatory authority for appropriate guidance. 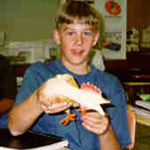 Keeping Food Safe During Buffets or Picnics
Buffets or picnics can be a means to transmit disease among your guests if care is not taken in how the food is handled.

Waterborne Illness
Waterborne illness is caused by recreational or drinking water contaminated by disease-causing microbes or pathogens. Of note, many waterborne pathogens can also be acquired by consuming contaminated food or beverages, from contact with animals or their environment, or through person-to-person spread.

There's No Such Thing as "Stomach Flu" (PDF)
Complaints of "stomach flu" are usually norovirus, the most common cause of gastrointestinal illness.

If you have questions or comments about this page, please use our Food Safety Comment Form.