Vermiculite ore containing hazardous Libby asbestos was processed in Northeast Minneapolis from 1938-1989. This page contains information about the vermiculite, ways people were exposed, potential health impacts, and publications and resources.

Expand All   Contract All

Vermiculite is a naturally occurring mineral used in insulation (brand name, “Zonolite”), construction, and gardening products. From 1924 -1990, most of the world’s supply of raw vermiculite ore came from Libby, Montana. This ore is now known to contain a group of mineral fibers called “Libby Asbestos.”

Ore from the Libby mine was shipped to many processing plants around the country. From 1938 to 1989, ore was processed at the Western Mineral Products plant located at 1720 Madison St. NE in Minneapolis.

At this plant, raw vermiculite was heated until the moisture trapped in the ore caused it to pop like popcorn. After going through this “exfoliation” process, the vermiculite was light and porous, making it suitable for insulation.

Some of the ore was left behind after it was heated. This waste material was known as “crush rock” or “stoner rock.” It was left in piles outside the plant and was free to anyone. We now know that this waste rock was contaminated with asbestos.

In NE Minneapolis, people used the waste rock in their yards, gardens, driveways, barbeques, and other construction projects. Children from the neighborhood also played on piles of “crush rock.” 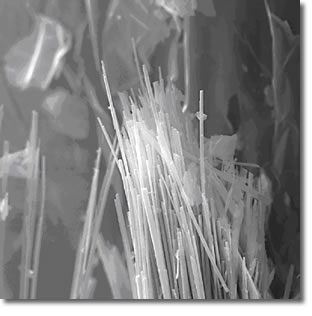 Asbestos is a mineral fiber that is very toxic if inhaled. It has been known for many years that workers exposed to asbestos suffer from asbestos-related diseases. These diseases generally are not diagnosed until 20-30 years after coming into contact with (exposure to) asbestos.

Asbestos exposure can cause a type of permanent lung damage known as asbestosis, which causes shortness of breath and increases the risk of serious lung infections. Asbestos can also cause lung cancer, and a rare type of cancer known as mesothelioma, which affects the lining around the lungs and abdomen.

One of the most common effects seen on chest x-rays are changes in the lining of the lungs, called pleural plaques and pleural thickening. In some cases, these changes may cause difficulty breathing.

Individual health risk depends on many factors, including how much and how long a person is exposed, age, occupation, smoking and health history. Residents concerned about health problems associated with asbestos exposure should consult their physician.

In 2001, MDH investigators interviewed residents living near the site to learn more about exposures and possible health risks. Former residents and owners of contaminated properties were also interviewed. This information, together with additional studies from Libby, Montana, has helped to identify the extent of asbestos exposure to workers and the community.

Libby asbestos was found and cleaned up on 268 residential properties in Northeast Minneapolis from 2000‐2003.  To confirm that the exterior cleanup was sufficient to eliminate exposure to this asbestos, EPA conducted further indoor air and dust sampling in 2008 and soil sampling in 2010.   EPA collected and analyzed indoor air and dust samples from residences that previously had Libby asbestos contamination in their yards.  Approximately 30 percent (14 out of 48) of residences had detectable, but very low concentrations of Libby asbestos in air, similar to background concentrations.  There was no Libby asbestos detected in settled dust samples from any residence.  EPA collected soil samples from 40 properties downwind from the Western Minerals Products property to see if there was any residual asbestos contamination from the processing of Libby vermiculite ore. No fibers were detected in any of the soil samples.

Contamination from the Western Mineral plant appears to have been effectively removed from the neighborhood residences and is not expected to harm people’s health. Nevertheless, because asbestos related diseases often have long latency periods (up to 50 years), disease may continue to occur into the future due to past exposure to Libby asbestos from vermiculite processing in Northeast Minneapolis.

Cancer Occurrence in the North/Northeast Communities of Minneapolis, 2003-2012 (PDF)

Contact us for information about other publications related to this site.