Why Does My Water Smell Like Rotten Eggs?
Hydrogen Sulfide and Sulfur Bacteria in Well Water

Hydrogen sulfide gas (H2S) can give water a “rotten egg” taste or odor. This gas can occur in wells anywhere and be:

May help other bacteria grow

Sulfur bacteria produce a slime and can help other bacteria grow, such as iron bacteria. The slime can clog wells, plumbing, and irrigation systems.

Gas may be harmful

While sulfur bacteria are not harmful, hydrogen sulfide gas in the air can be harmful at high levels. It is important to remove the gas from the water, or vent the gas to the atmosphere. Venting prevents the gas from collecting in low-lying spaces (such as well pits and basements) or enclosed spaces (such as well houses). Only well professionals should enter a well pit or other enclosed space where hydrogen sulfide gas may be present.

In most cases, the rotten egg smell does not relate to the sanitary quality of the water. In rare instances, the gas may be from sewage or other pollution. To be safe, test your well water for coliform bacteria and nitrate.

What you can do

The first step is to find out what the source of the issue is; that will let you know what treatment option is best.

How to Find the Source

After you have been away from your home for a few hours, smell the water coming out of the hot and cold water faucets. Determine which faucets have the “rotten egg” odor. 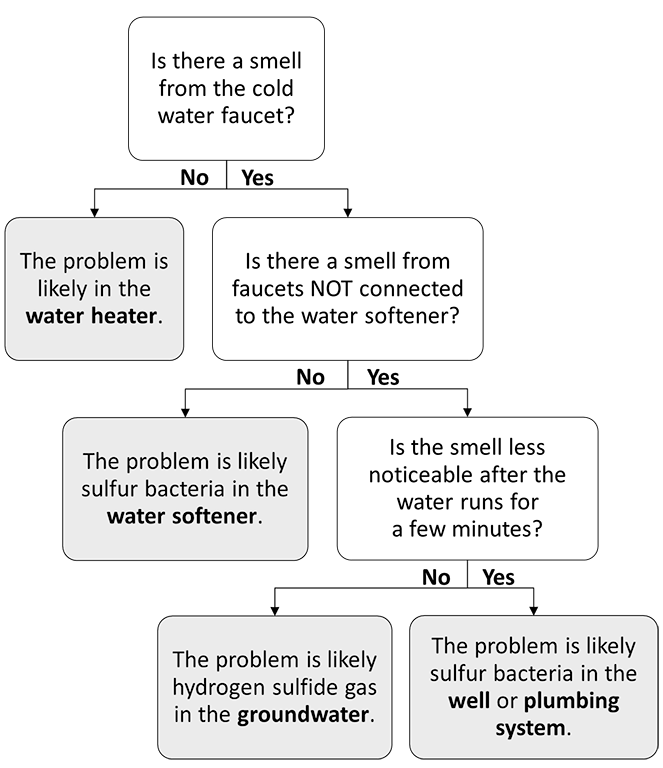 If the Problem is in the Water Heater

Unless you are very familiar with water heater operation and maintenance, have a plumber or water system professional to do the work.

CAUTION: Increasing the water heater temperature can be dangerous. Consult with the manufacturer or dealer regarding an operable pressure relief valve, and for other recommendations. Be sure to lower the thermostat setting and make certain the water temperature is reduced following treatment to prevent injury from scalding hot water and to avoid high energy costs.

How Hydrogen Sulfide Gas is Produced in a Water Heater

If the Problem is in the Well, Plumbing System, or Water Softener

Disinfect the well and plumbing system with a strong chlorine solution. You can hire a licensed well contractor to do this or refer to the Well Disinfection webpage for instructions.

Sulfur bacteria can be difficult to remove once established in a well. Pre-work (such as scrubbing the well casing, using special treatment chemicals, and agitating the water before disinfection) may be necessary—especially if there are also iron bacteria. Contact a licensed well contractor to do this pre-work.

If the bacteria are in the water softener or other treatment devices, contact the installer, manufacturer, or Minnesota Department of Health for disinfection instructions.

If the Problem is in Groundwater

Should I test my well water for anything besides Hydrogen Sulfide?

Yes. Both natural sources and human activities can contaminate well water and cause short-term or long-term health effects. Testing your well water is the only way to detect most of the common contaminants in Minnesota groundwater; you cannot taste, see, or smell most contaminants. Minnesota Department of Health recommends testing for:

Other contaminants sometimes occur in private water systems but less often than the contaminants listed above. Consider testing for: