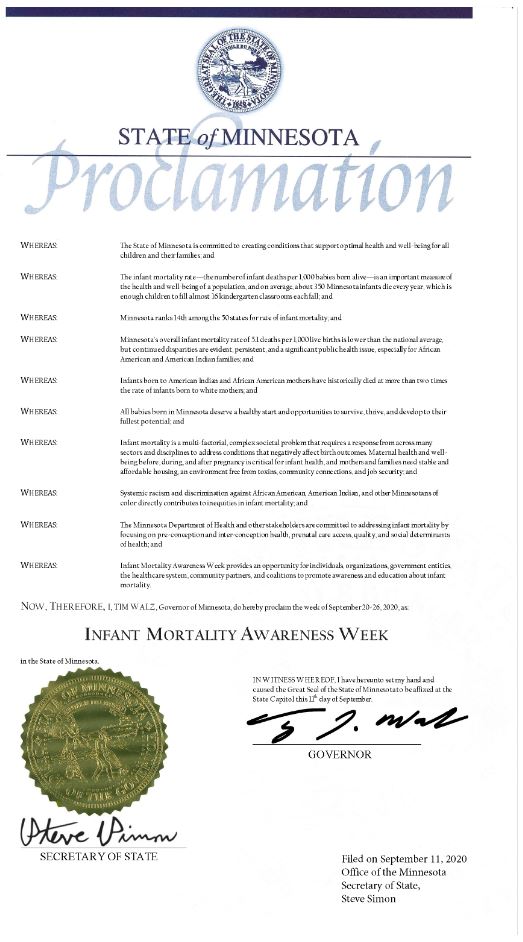 WHEREAS: Infant mortality is the death of a liveborn infant before age one; and

WHEREAS: The infant mortality rate—the number of infant deaths per 1,000 babies born alive—is an important measure of the health and well-being of a population; and

WHEREAS: On average, about 350 Minnesota infants die every year, which is enough children to fill almost 16 kindergarten classrooms each fall; and

WHEREAS: National estimates show that Minnesota's overall infant mortality rate of 5.1 deaths per 1,000 live births in 2018 is lower than the national average. However, disparities, especially for African American and American Indian families, are evident, persistent and a significant public health issue; and

WHEREAS: Infants born to American Indian and African American mothers have historically died at more than two times the rate of infants born to white mothers; and

WHEREAS: All babies born in Minnesota deserve a healthy start and opportunities to survive, thrive, and develop to their fullest potential; and

WHEREAS: Infant mortality is a multi-factorial, complex societal problem that requires a response from across many sectors and disciplines to address conditions that negatively affect birth outcomes. Maternal health, and wellbeing, before, during, and after pregnancy, including housing and job insecurity, environmental toxins, lack of social support and community connections, and a lack of access to health care; and

WHEREAS: Systemic racism and discrimination against Black/African American, American Indian, and other people of color directly contributes to inequities in infant mortality; and

In the State of Minnesota.

IN WITNESS WHEREOF, I have hereunto set my hand and caused the Great Seal of the State of Minnesota to be affixed at the State Capitol this 8th day of October.