Skip to Content
The Purest Water in Minnesota - EH: Minnesota Department of Health

The Purest Water in Minnesota

From the Spring 2002 Waterline


The purest water in Minnesota comes not from the deep wells of Buhl—a city that has “Finest Water in Minnesota” painted on its tower—nor from a pristine stream at elevations far above any human or animal activity that could foul the water.

The purest water—not just in Minnesota but anywhere in the world—is not found in nature but rather is manufactured through a treatment process that that can reduce impurities to under .1 part per billion (ppb). For the processing of their products, semiconductor facilities routinely develop this type of water, at rates up to 3,000 gallons per minute. 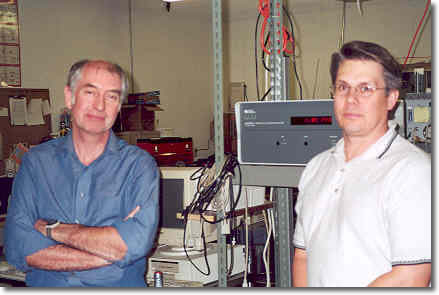 In smaller quantities, the purest water in Minnesota is produced in a modest office/warehouse, operated by two employees, in a northern suburb of St. Paul. David Blackford (left) and Tom Kerrick (right), who developed an instrument that measures the purity of water, now manufacture ultrapure water for the purpose of testing and calibrating the instrument, which they sell to semiconductor companies across the United States as well as in Europe and Asia.

Blackford—the president of Fluid Measurement Technologies, Inc. in Vadnais Heights, Minnesota—says their goal is to replicate the ultrapure water being used by semiconductor companies. “We try to get the same type of water they have,” he says. “How pure the water needs to be for these companies depends on the line-width of the electronic circuitry of their products. Some go down to .13 microns and need water with residue of less than 1 part per billion. If the water isn’t that pure, it will leave a residue on the surface of their silicon wafers, causing problems with the operation of the semiconductors.”

While working together at TSI, Inc. in Shoreview, Minnesota, Kerrick and Blackford developed a non-volatile residue (NVR) monitor for ultrapure water in the late 1980s. Blackford left TSI to start Fluid Measurement Technologies in 1995; four years later, Kerrick followed and is the firm’s director of manufacturing and technical services. Under a licensing agreement with TSI, Inc., Blackford and Kerrick continue to manufacture, market, and service the NVR monitor. 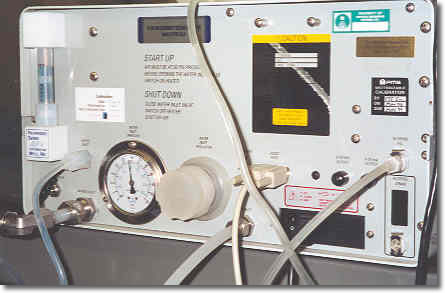 Ultrapure water is produced to calibrate and test the non-volatile residue (NVR) monitor manufactured by Fluid Management Technologies, Inc. The device can detect impurities in water down to 10 parts per trillion.

The process to convert city water from Vadnais Heights to ultrapure water consists of a pre-treatment loop and a purification and polishing loop.

The pre-treatment begins with a carbon filter to remove chlorine, followed by anion and cation resins for hardness removal. “The biggest issue is calcium, which will foul our reverse-osmosis membranes,” Blackford says, adding that the anion and cation beds operate like a “superior water softener” and, unlike ion exchange used in conventional water softening, don’t exchange calcium for sodium, which would also have to be removed.

After an ultraviolet (U-V) lamp destroys bacteria, a pump recirculates the water back to the carbon filter. “We never want the water to sit because it will encourage bacterial growth,” Blackford explains. “It has to be constantly moving.

“That’s why you can’t bottle this stuff. The moment you bottle it, it degrades. Whatever you put it in will eventually leach something into the water, and it will no longer be high-purity water.”

The water continues circulating in the pre-treatment loop until there is a demand in the polishing loop. A valve opens to allow water into a 65-gallon storage tank and then to the first of two ion-exchange beds, this one a mixture of anion and cation resins. Downstream of the ion exchange beds is a one-micron filter that serves as a resin trap.

Next is the reverse-osmosis (R-O) system, consisting of four membranes. Then comes another ultra-violet lamp. Unlike the U-V lamp in the pre-treatment loop, which removes only bacteria, this one gets rid of both bacteria and total organic carbon.

Another ion-exchange bed treats the water with semiconductor-grade virgin resin. “The by-product of resin exchange is pure water,” says Blackford. “The combination of using both R-O and ion exchange is what produces the very pure water. Neither component by itself would generate water of this quality. Everything works together.”

A series of filters then finishes the process. Two ultrafilters—which are in parallel—have a rated 10,000-molecular weight. A point-of-use filter, rated at .04 micrograms, is downstream of the ultra-filters and is the final component before the water enters the distribution loop, consisting of perfluoroalkoxy (PFA) Teflon.

Blackford says the PFA loop is critical to keeping the water clean since it releases absolutely no impurities as it brings the water from the polishing loop to the instruments. The PFA Teflon is also very expensive, comprising approximately 40 percent of the total cost of the water system.

After the water achieves its purpose—calibrating the NVR monitor—it returns to the storage tank and back into the polishing loop. Kerrick says it is significant that they have no discharge of the water, since the corrosive characteristics of such pure water would make disposal of it a challenge, requiring the used of holding ponds as the water, in this condition, could be classified as hazardous waste.

Blackford notes that ultrapure water is in an “unstable state. People don’t appreciate how corrosive high-purity water can be. Water is desperate to get back to its natural state, which is full of impurities. With everything removed, it becomes a very aggressive solvent.”

Reverse-osmosis, along with resin exchange, is part of the process used to manufacture the purest water in Minnesota.