Skip to Content
From Tall to Taller: Minnetonka Raises a Tower - EH: Minnesota Department of Health

From Tall to Taller: Minnetonka Raises a Tower

From the Summer 2005 Waterline 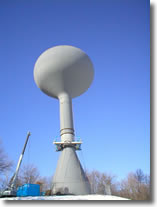 The city of Minnetonka is a western Twin Cities suburb that has grown over the past few decades to the point that it now has a population of greater than 50,000. The city’s water utility has also grown and now has eight treatment plants with sand filtration to serve the residents. In addition, the water system has three different pressure zones because of differing elevations. Seven of the nine towers are within the largest zone, which covers approximately three-quarters of the city. One of those towers is being put back into service after more than a decade of inactivity.

The 500,000-gallon Tanglen tower (near Tanglen Elementary School and just north of the city line with Hopkins) was built in 1967 and originally operated as an isolated system. As the city grew and demand increased, additional storage was added, causing a problem with the Tanglen tower, which began overflowing because its elevation was seven feet lower than the other towers. "As the rest of the water system developed, its overflow elevation became obsolete," said Minnetonka director of public works Brian Wagstrom. The city tried altitude valves, but when the problems persisted, it took the Tanglen tower out of service.

There was talk of dismantling the tower, but Wagstrom thought that the city might someday regret the decision if it found itself in need of additional capacity. Beyond the cost of a new tower would be the normal headaches of getting approval for such a project along with dealing with concerns of nearby residents. From this came the decision to try and make the existing tower usable and put it back into service.

The engineering firm of Toltz King Duvall Anderson (TKDA) of St. Paul examined the options available to Minnetonka and recommended a renovation of the Tanglen tower, which included raising it by seven feet to bring it to the same elevation as the other towers in the pressure zone. Verne Jacobsen, senior registered engineer for TKDA, said his firm has been involved in changing the elevation of several towers in the region. A feasibility study was necessary to make sure that the tower foundation as well as the soil could bear the additional load. Once this was confirmed, the project moved forward.

The general contract was awarded to Classic Protective Coatings of Menomonie, Wisconsin, which contained and stripped off the lead-based coatings. The elevation change was subcontracted to General Construction Services, Inc. of Stillwater, Minnesota, for $188,000.

Two options existed: taking the tank off and adding seven feet to the stem or jacking the tank in place to raise it. Removal of the tank was ruled out because of the confines of the site, which could not have accommodated the two large cranes that would have been necessary. Instead, it was decided to make the cut just above the flared portion of the stem, immediately above the condensate ceiling.

Preliminary work began in late January 2005 and took approximately 10 days. Inside, the condensate platform was used for the workers, and another platform was built just below for the jacking equipment. Six 20-foot long jacking beams were welded to the portion of the stem that would be raised. Each of these beams was pinned to one of six 100-ton jacks, which had 24-inch extension heights.

On the outside, rings were placed around the stem to keep it from distorting during the raising procedure. "If a wind came up after the top of the stem was extended seven feet on the beams, it could push against one side of the tank, which could push the column and egg-shape it," explained David Webb, the construction manager for General Construction Services. "The rings kept the column round during the jacking process."

With the set-up work complete, the project was performed on Thursday, February 10, 2005. A seam was cut around the stem, which is 31 feet, 8 inches in circumference. The raising took place with four separate lifts of 21 inches each. "We developed a chart, figured the square inches on the jack, and determined that the load was 240,000 pounds," explained Webb. "In order to move that, we needed to have about 2,380 pounds per square inch [psi] on each jack. Once we started jacking, it jumped to about 2,500 psi, and that’s where it stayed."

The crew used a vertical laser with a target on the top landing to monitor the lifting and ensure that all beams rose evenly. After each lift, which took approximately 12 to 15 minutes, the beams were pinned off to hold them in place as the jacks were retracted in order to start another lift. The entire jacking operation took approximately three hours.

Once the upper portion had been lifted seven feet, two half-plates, each seven-eighths of an inch thick (1/16 of an inch thicker than the 13/16-inch wall of the stem) were lifted into the opening and welded into place.

The tower, now 122 feet high, reaches an overflow elevation of 1,116 feet (with the ground elevation 986 feet at that point).

Wagstrom believes that when all the costs are in, including painting, they will have achieved the heightening of the tower for under $400,000, less than half of what they would have spent to dismantle the existing tower and erect a new one.