Menthol is a flavor additive commonly used in cigarettes and other tobacco products. Federal law currently prohibits the manufacture and sale of flavored cigarettes, with the exception of menthol.1

Menthol cigarette use is high among youth and African Americans. 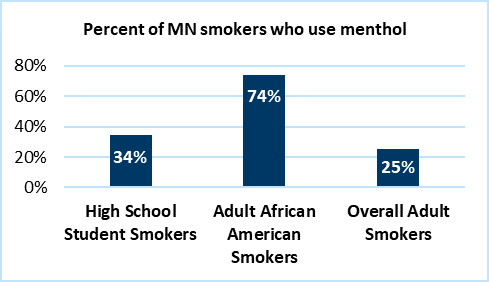 Additionally, almost one in four Minnesota African Americans are current smokers (compared to 14.4 percent of adults statewide), with the vast majority using menthol.6 While menthol use is high in many communities, use by African Americans is particularly concerning as they are 30-36 percent more likely to die of lung cancer than non-Latino whites;7 they are also 53 percent more likely to die of heart disease.8

Menthol makes experimentation easier because it can mask irritation from smoking. It has a minty taste and smell and produces cooling and numbing sensations that reduce the harshness of cigarette smoke.9-16 This may encourage youth to keep smoking when they would otherwise stop.9

The use of characterizing flavors began in the 1970s to make it easier for new smokers to start, and to become regular smokers more easily.17-19

Menthol makes it harder for smokers to quit for good.

Advertising is a strong driver of brand preference, especially among youth, and it is likely that price discounts, promotions, product placement, and geographic location have been used to drive menthol cigarette preference among youth and young adults as well as the African American community.9, 10

Communities are addressing menthol tobacco use.

It was conducted as part of the Menthol Cigarette Intervention Grant, required by the Minnesota Legislature, to deepen understanding of African American use patterns and perceptions and attitudes toward menthol tobacco, and it will serve as a basis for community engagement and education moving forward.

Survey results reinforce the need to educate and raise awareness on the harms of menthol tobacco use, and they also show that a majority of African American community members support new laws to reduce tobacco’s harm.

Proven tobacco control policies and evidenced-based strategies are necessary to prevent all forms of tobacco use, including flavored tobacco products.38 Effective strategies include price increases as well as restricting youth access to tobacco products and exposure to tobacco product marketing.39 The Tobacco Products Scientific Advisory Committee of the Food and Drug Administration states that "removal of menthol cigarettes from the marketplace would benefit public health in the United States."9