Subscribe to The Waterline newsletter. An e-mail notice is sent out each quarter when a new edition is posted to the web site.

A Bridge to Somewhere 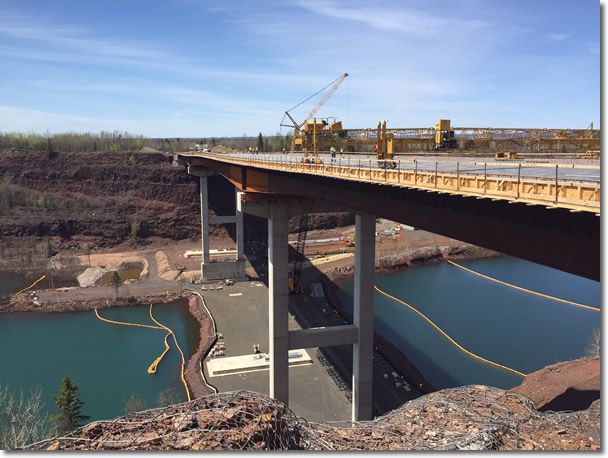 The relocation of U. S. Hwy. 53 in Virginia, necessary for mining companies to reach iron ore reserves under the existing highway, includes a bridge over the Rouchleau Pit, the source of drinking water for the city of Virginia. Minnesota Department of Health engineers are making sure the water is protected during and after construction. One of the features during construction is silt curtains (shown above). The curtains are part of a multi-layered approach to keep materials away from the drinking water intakes, which includes an impermeable liner and rock berm on the causeway below the bridge. Water and sewer lines are also being relocated with the highway and will pass under the bridge (shown below). Full story below. 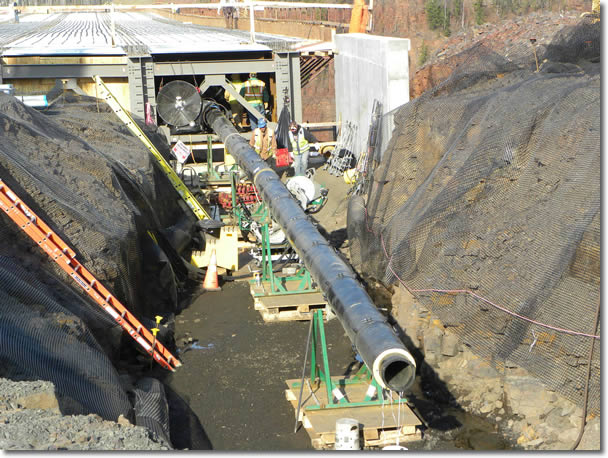 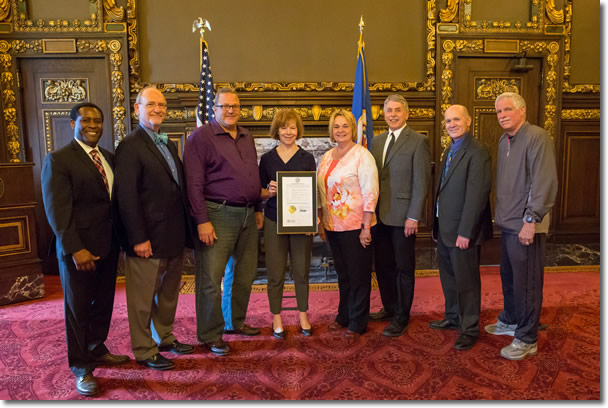 Minnesota Lt. Governor Tina Smith (center) holds a proclamation signed by Governor Mark Dayton that made May 7-13 Safe Drinking Water Week in Minnesota. Smith is flanked by representatives of the Minnesota Department of Health (MDH), Minnesota Section of American Water Works Association, and Minnesota Rural Water Association. MDH also released its annual report, documenting monitoring results from 2016. The report also looks at water issues that have developed elsewhere in the country with the theme of “Unsafe Water: Could It Happen Here?” Contact the Drinking Water Protection Program at health.drinkingwater@state.mn.us for a copy of the report. 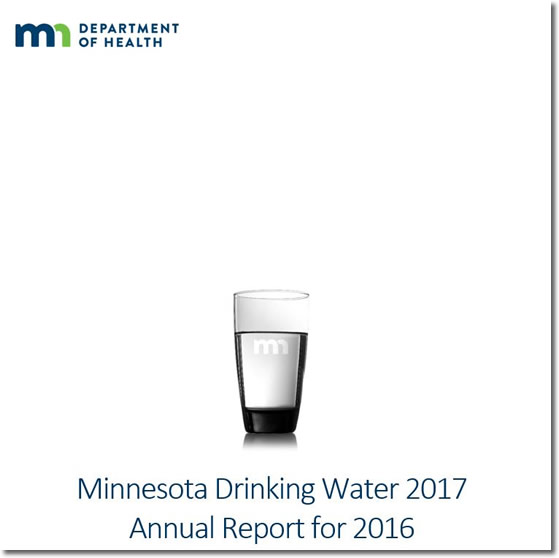 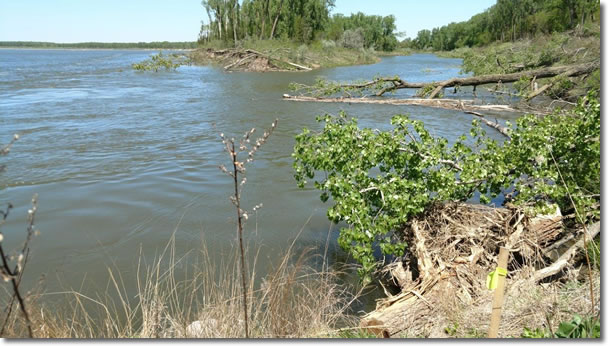 The Minnesota Legislature approved a bonding bill, which was signed by Governor Mark Dayton, that included a federal funding advance to connect the southern Minnesota city of Worthington to the Lewis & Clark Regional Water System (LCRWS) by the end of 2018.

Conceived in 1988 as a way of serving water-challenged areas in South Dakota, Iowa, and Minnesota, the Lewis & Clark project takes water from a series of wells that tap into an aquifer adjacent to the Missouri River near Vermillion, South Dakota. The water is delivered to communities as far away as 125 miles.

The state had previously provided advances of $22 million in fiscal year 2014 and $19 million in fiscal year 2016. “Due to an extremely favorable bidding environment these last two years, there is an estimated $8 million surplus from the $19 million advance,” said LCRWS executive director Troy Larson, who explained that Lewis & Clark was prevented from using the surplus toward construction of the 16.8 miles of pipeline between Adrian and Worthington. “The bonding bill approved includes language allowing Lewis & Clark to use the surplus toward construction of this segment of pipeline. It also includes a third and final advance of $3.5 million to also be used toward construction of the pipeline.”

“We are extremely relieved to get this final piece of the funding puzzle in place so we can finally get Lewis & Clark water to Worthington,” said Worthington Public Utilities manager and Lewis & Clark director Scott Hain. 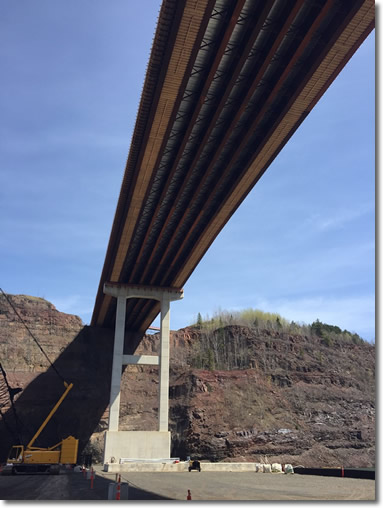 The history of the Mesabi Iron Range in northeastern Minnesota includes towns being moved so land could be mined for iron ore. Hibbing is the most notable, its residents and businesses displaced by a growing open-pit mine nearly 100 years ago.

The trend continues in the 21st century with the rerouting of U. S. Hwy. 53 through Virginia, a serpentine course around the city and over the Missabe Mountain Pit (also known as the Rouchleau Pit), which is the source of drinking water for Virginia.

In the early 1960s the Minnesota Department of Transportation (MnDOT) secured an easement to turn Highway 53 into a four-lane road. The agreement allowed the mining company to retain ownership of the land and the power to have the state vacate the land. Through 1987 the mining company—U. S. Steel, the original owner, or its successor—was responsible for moving the road. It became the state’s responsibility after 1987.

In 2010, it happened. The land owner, RGGS Lands and Minerals of Pelham, Alabama, notified MnDOT that it wanted to expand its Thunderbird Mine to access the iron ore that is beneath a section of Hwy. 53, on the south and west side of the Rouchleau Pit. MnDOT, RGGS, and Cliffs Natural Resources of Cleveland (the lessee of the land) negotiated a schedule that called for the highway, along with all utilities of the city of Virginia and the Virginia Public Utilities Commission to be removed by 2017 as well as infrastructure and the Mesabi Trail.

The result was a massive project in terms of coordination and planning that involved other state and federal agencies, including the Minnesota Department of Health (MDH), to perform plan review and source water protection measures related to the city’s water supply. 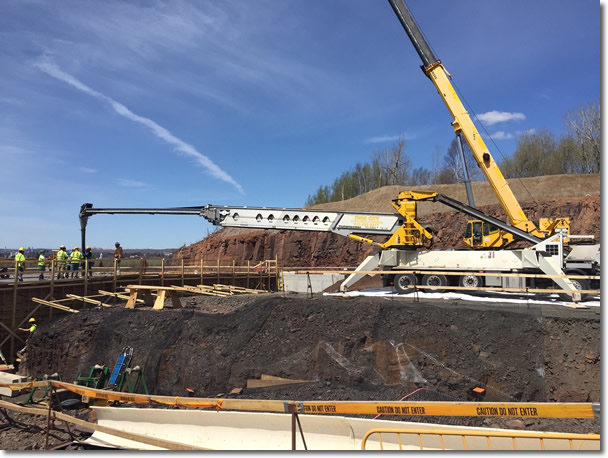 The placement of concrete on the bridge deck over the Rouchleau Pit began May 9, 2017. 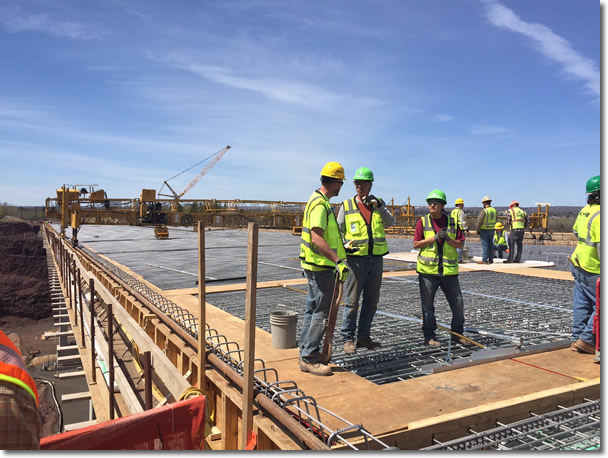 The project used the process of Construction Management General Contractor (CMGC) as opposed to a low-bid or design-build method. CMGC, which is relatively new to the transportation industry, incorporates the owner, designer, and contractor and allows the owner to hire a contractor to collaborate with the owner and designer to explore efficient construction means and methods, reduce risk, define and reduce the construction schedule, and increase cost certainty during the design phase and before the start of construction.

Pat Huston, the project engineer for MnDOT, said, “With CMGC we were able to plan the resources needed to complete this on schedule.” Construction began on November 2, 2015, fewer than nine months after the design contract was executed. The prime contractor on the project is Kiewit Infrastructure Company of Omaha, and 29 subcontractors (28 from Minnesota) are completing approximately 30 percent of the work.

MnDOT had explored options for moving the highway before settling for a 3.1 mile route to the east of the Rouchleau Pit that reconnects with the existing Hwy. 53 after crossing the 1,125-foot-long bridge over the pit. The Mesabi Trail, a pedestrian and bicycling trail, which is also open to snowmobiles in the winter, is part of the bridge and separated by a railing from the traffic lanes. Pedestrian plazas are at each end of the bridge with a time capsule on the eastern side.

Kiewit had first considered using barges to bring in materials and staging its operations but instead opted for an earthen causeway beneath the bridge. The causeway was created with more than 300,000 cubic yards of fill, waste rock owned by the Minnesota Department of Natural Resources taken from near the project. The causeway, which is permeable enough to allow water in the pit to pass through, remains in place for maintenance uses.

With the eastern pier of the bridge rising more than 200 feet above the pit, the bridge is one of the tallest—if not the tallest—in the MnDOT system. Pilings for both piers were drilled into bedrock. Shoring towers, which had been used for the new Minnesota Vikings stadium in downtown Minneapolis and made adaptable enough for use on other projects, were brought in to temporarily support the large steel bridge girders until they were all in place and spliced together.

The placement of 80 girders, totaling 10 million pounds, began in the fall of 2016 and was completed in January 2017. A gigantic Terex CC6800 1375 Ton Crawler, the same model as was used for the Vikings stadium, was brought in to lift the girders from the causeway to the bridge deck. Huston said the girders were spliced into “four packs,” two pieces end-to-end coupled with another parallel pair. Weather was a factor with the schedule; the girders could not be lifted if the wind was more than 12 miles per hour.

“The Terex crane minimized the number of picks the contractor had to make, thus reducing the risk and increasing safety,” Huston said, adding that the heaviest of the lifts was 750,000 pounds. 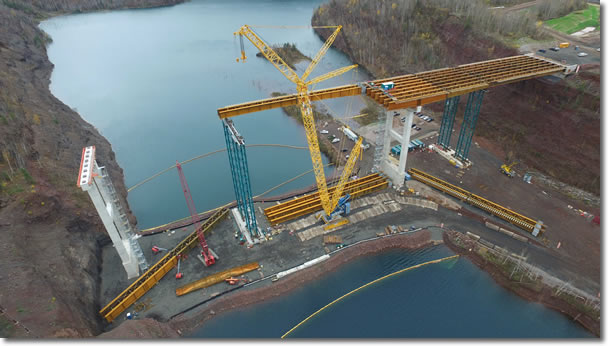 An aerial view from the north of the mammoth Terex crane lifting girders into place.

The girders were fabricated at Veritas Steel in Eau Claire, Wisconsin, more than 200 miles from the project. A special route needed to be worked out to get the girders to the site and had to be coordinated with paving and other road projects along the way.

In addition to the highway, watermains were also rerouted along the highway and across the bridge. MDH engineers Brian Noma, David Weum, and David Rindal oversaw the plan review portion of construction related to water supply. All have been involved since the beginning of the project, working with the contractors on concerns related to the Safe Drinking Water Act and the impacts of construction.

MDH hydrologist Tracy Lund worked on issues related to source water protection and noted that stormwater runoff goes to retention ponds on the east side of the bridge rather than directly into the water below, slowing the infiltration process. The bridge has no deck drains; in addition, snow will be plowed to the side of the bridge and then removed by MnDOT, using snow blowers and trucks.

The bridge is opening to traffic in August 2017 with the infrastructure removed along the old portion of the highway so that mining operations could begin as soon as possible. Even the final work, including landscaping, is being completed in 2017 instead of the following spring, as was originally planned.

Huston said the early completion will save money by not having overhead through another winter, helping with the price tag of $240 million for the total project. The cost includes the purchase of the mineral deposits below the highway so that MnDOT has full ownership of the highway and the land.

Even though he won’t be around for the life of the bridge, projected to be at least 100 years, Huston thought of those who will follow and said, “We don’t want to have to go through this again.” 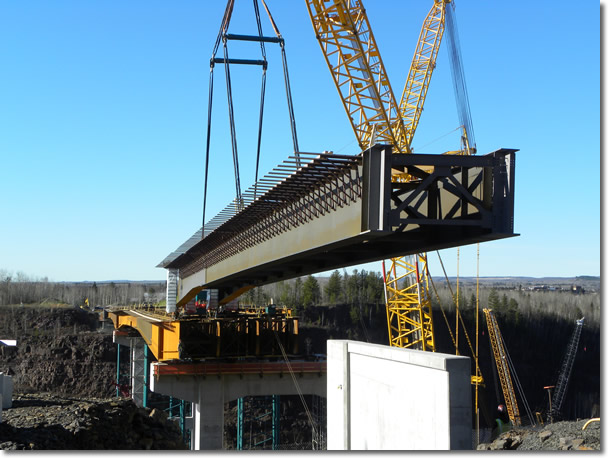 Placement of the girders, using the Terex crane, began in the fall of 2016 and continued into the winter. 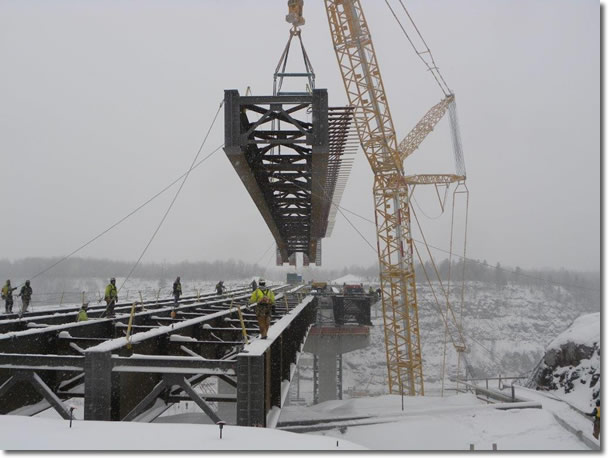 The Minnesota Department of Health is filling positions opened by the recent retirements of Steve Pederson, Dave Schultz, and Mark Sweers.

As noted in the Summer 2017 Waterline, Lucas “Duke” Hoffman was hired to succeed Pederson as the engineer in the West Central District.

Amy Lynch will move from the Metro-West District to the South-Central District, which had been the district for Mark Sweers. Lynch will continue to work out of the Mankato office.

Simon McCormack, working out of the Metro Office in St. Paul, takes over Lynch’s previous district.

Lucas Martin, the Metro-North engineer, will continue as the primary contact for Schultz’s former Central-North District. 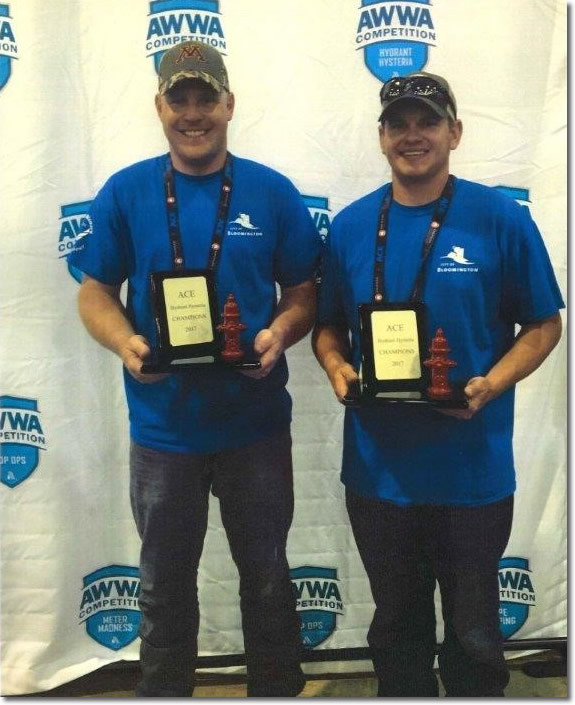 By Carol Kaszynski, City of Bloomington

Congratulations to Chad Bauer and Justin Johnson of the city of Bloomington Utilities Division. They drenched their competition and took home the hydrant trophy by winning first place in Hydrant Hysteria at the AWWA Annual Conference & Exposition in Philadelphia.

The duo competed against 17 strong challengers. Their finishing time was 1:33.6.

Hydrant Hysteria is a competition in which a team of two compete to assemble a fire hydrant the quickest. According to the American Water Works Association, Hydrant Hysteria is meant to challenge the competing teams’ skills while assembling the hydrant. Once the team finishes, the judges test the product to ensure it functions as it’s supposed to.

The team competed and won 1st place at the Minnesota AWWA annual conference in 2016, which allowed them to advance and compete at the national level.

The team is headed to Las Vegas next June to defend the title and are looking forward to another 1st place win!

Reminder to All Water Operators

When submitting water samples for analyses, remember to do the following:

Notify your Minnesota Department of Health district engineer of any e-mail changes for contact people.

If you have questions, call the Minnesota Department of Health contact on the back of all sample instruction forms.

Operator training sponsored by the Minnesota Department of Health and the Minnesota AWWA will be held in several locations this spring.

Register for schools and pay on-line: