From the Fall 1993 Waterline 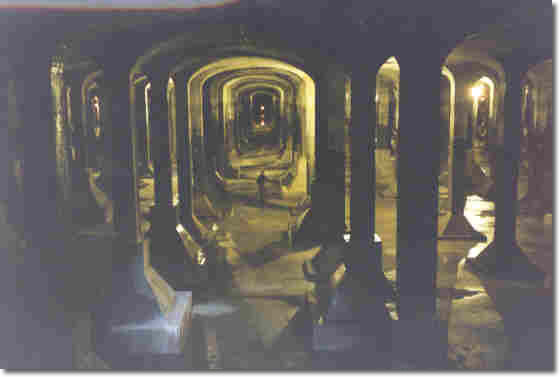 An opportunity to roam its bowels is nearly as rare as the chance to gaze the skies for Halley’s comet. A trip down the 43 stairs into this cavern renders a panorama that harkens back to Mayan architecture.

The structure is a reservoir, part of the Minneapolis Water Works system. When filled, it holds 45 million gallons of treated water, more than a third of the system’s total storage capacity.

The reservoir is 90 feet long and 400 feet wide, its roof supported by 980 columns, each 25 feet high and topped with arches. For more than two years the reservoir has been empty, taken out of service to patch cracks in the roof and arches and reinforce the footings of columns that were settling.

This structure started as an open reservoir in 1897. On the heels of a cholera and typhoid epidemic a few years later, the state of Minnesota tightened its regulations and required closed reservoirs for treated water. The 1913 work to enclose the reservoir included a concrete overlay on its floor and sloped sidewalls in addition to the construction of the columns and roof structure.

No reinforcing rods were added to the concrete in the columns during this construction. Not only was the idea of reinforced concrete only an emerging technology at the time, the reinforcing rods were extremely expensive, as was the concrete itself. The original contractors were able to eliminate the need for rebar and save on quantities of concrete by making arches and depressions over the top of the columns. The arch design both strengthened the structure, removing tension from the columns, and resulted in less concrete being used. The arches necessitated more labor for the construction of the forms, but labor was a low-cost commodity at that time, at least cheaper than the materials.

In the mid-1970s, the reservoir was opened for a thorough inspection, one that eventually resulted in the current construction. Water was found seeping through cracks in the roof and arches. The inspection determined that, although there was no contamination of the treated water, repairs were needed.

Another inspection—this one to determine the extent of the repairs and the money needed—was conducted in 1990 by four Water Works employees: Superintendent of Planning and Design Jay Whitaker; Head Chemist Larry Cole; Superintendent of Treatment Adam Kramer; and Yasser AbouAish, the project manager for the construction.

With the water level dropped 10 feet to allow access, the four men rode through the catacombs in two boats, using electric trolling motors and hand-held spotlights, all treated with chlorine to prevent contamination of the supply. During their two-day tour, they took 10 sets of core samples and documented cracks in the arches and roof. AbouAish said that not only could they see the water seeping through the top and running down many of the pillars, they also discovered plant roots coming through the cracks in the ceiling in some spots.

Although they could not see the base of the columns during this inspection, settling of some of the columns was evident because of uneven sections of the roof. “Later, we could see where some of the columns, those that were over bad soil and couldn’t take the weight, were slightly punching through the floor,” said AbouAish.

Equipped with only the hand-held lights to illuminate the interior, the four men took great care to keep from getting hopelessly lost in this murky underworld. AbouAish said they planned their route carefully and used walkie-talkies to stay in touch with their people at the hatchway at the north end of the reservoir.

The reservoir was closed and completely drained early in 1991. Construction began later in the year with loose concrete on the floor being chipped away.

Then city workers, many borrowed from street-paving and sewer-maintenance crews following their construction seasons, moved in for the concrete work. They placed a new overlay—this one with a wire mesh in it—on the floor and encapsulated the footings on 115 of the 980 columns with reinforced concrete to enlarge them to twice their size. The cracks in the roof and arches were then filled with structural two-part epoxy.

The final portion of the construction is now being performed outside the reservoir with the four feet of soil on the roof being stripped so a leakproof liner can be installed and lightweight concrete placed to insulate and provide drainage. Some of the soil will then be replaced.

After that, the process of refilling the reservoir will begin. AbouAish says they plan to go back in to inspect the repairs in seven-to-ten years, although they will keep the reservoir in service during that time by only partially draining it.

Note: Since this article was originally published in 1993, the renovation was completed and the reservoir refilled. Those wanting to see its interior will have to wait awhile and may have the chance to get a glimpse of Halley’s Comet in the meantime.