From the Spring 2005 Waterline 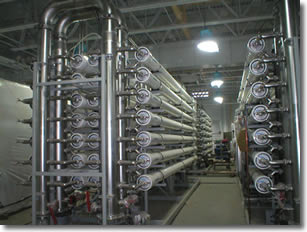 The first significant phase in a decade-long process to upgrade Minneapolis Water Works and position the utility to meet emerging threats and more stringent standards is nearing completion. An ultrafiltration (UF) membrane plant at the system’s facility in Columbia Heights will be on-line this summer.

Capable of producing up to 78 million gallons per day (MGD) during the warm-weather months, it will be the largest ultrafiltration system for drinking water in the United States and will enable Minneapolis to comply with increasingly tighter limits for microbial removal. In addition, the selected membrane system provides for removal of viruses and may deal with emerging microbes. The plant is set up to allow for future enhancements that could address endocrine disruptors.

In the wake of the Cryptosporidium outbreak that had occurred in Milwaukee in the spring of 1993, Minneapolis Water Works commissioned a feasibility study. “We looked at all of the available technologies to address our risks, which were based on log removal [percentage] needed,” said Adam Kramer, Director of Minneapolis Water Works. “The study included investigating ozone, UV [ultra-violet treatment], membranes, and a conventional plant. We viewed the risk in the source water, determined the log removal needed, determined the available removal from our existing facilities, determined the gap, looked at the treatment that would fill the gap, and then looked at the age of the infrastructure.”

From this analysis, along with the desire to retain soft water, the decision was made to go with membrane filtration. The upgrade will take place by constructing a new membrane ultrafiltration plant to replace the granular media filters at the Columbia Heights filtration plant and construction of a water treatment residuals lagoon. The overall cost of the project is $56 million, with the membrane system representing $16 million of it.

“We were postured in a perfect position to put in new technology,” Kramer added. “Experts from multiple national consulting firms concurred with that recommendation.

“If you’re going to something new, do you put in old technology or new? That’s what it boils down to.”

The existing filter plant in Columbia Heights, which uses ferric chloride as a coagulant with chlorine and ammonia added to the water, will serve as pretreatment for the ultrafiltration membrane system.

Membrane Options
Membrane filtration, which removes particles too small for conventional filters to remove, started in the 1960s with reverse-osmosis (RO) membranes for desalination. Since then, a range of less discerning membrane filters—nanofiltration, ultrafiltration, and microfiltration—became available, and these, along with RO, were the choices available to Minnesota.

Some of the advantages of reverse osmosis and nanofiltration, such as dissolved-solids reduction, weren’t needed by Minneapolis. Reverse osmosis would provide softened water, but since the utility already has a softening plant with a useful life remaining, it wasn’t considered necessary. Nanofiltration would have created problems with a large amount of wastewater, so the decision came down to microfiltration and ultrafiltration. Minneapolis, with its Peer Review Panel and Citizens Advisory Committee, opted for the latter, with emerging microbes and their size being the deciding factor.

“Cryptosporidium and Giardia are two to five microns. We were looking at the emerging microbes that are much smaller than that,” explained Kramer, who said they used surrogate viruses to determine pore size. “We specified and tested for a minimum of 4-log removal, which established the pore size, and that pointed to ultrafiltration.”

Kramer added that reverse osmosis remains an option for the future and one that likely will be employed if there is a problem with endocrine disruptors and pharmaceutical products, which enter the wastewater system and ultimately water sources, such as rivers, through excretion from humans. “We have, at the Columbia Heights plant, the piping and a place to have the UF become pre-treatment for the RO,” he said, “which would allow us to convert from an end-of-treatment to a pre-treatment for endocrine disruptors.” If and when this happens in both Columbia Heights and Fridley, Minneapolis will get rid of its softening facility.

“Crossflow would have some part of the stream continue past the membranes instead of a quasi dead-end system, which forces the stream through the permeable membrane, with that being the barrier to larger particles, including pathogens” explained Madalyn Epple, a regional sales manager for Ionics, which is responsible for the complete membrane system being installed at the Columbia Heights facility.

The ultrafiltration technology will use an Ionics UF membrane system containing more than 4,000 Norit X-Flow hydrophilic capillary (hollow-fiber) eight-inch diameter membrane elements. Dale Folen, the project engineer for Minneapolis Water Works, said the treatment process will consist of four trains with 10 units in each train. Each unit has 28 pressure vessels with four hollow-fiber modules inside each pressure vessel. “Water comes from feed pumps to the units,” he said. “The permeate, or treated water, goes down the train to the opposite end. All units in the train operate in parallel. The water goes through the membrane and then becomes permeate, exiting through a separate line. It operates in dead-end mode; the flow goes from the inside of the hollow fiber to the outside.”

Epple added that a spiral-wound system, unlike hollow fiber, cannot be backwashed. “And it’s crucial in this industry to have that positive barrier to be able to verify the integrity of the system,” she said, referring to the ability to confirm that all fibers are intact.

Folen said that the units are taken out of service if the fiber is broken. “The plant is sized so that 36 units [of the 40 units] can meet 78 MGD, which is their design, so they can still meet full capacity even with some of the units taken out of service. A diffused-air test is used to monitor and confirm the integrity of the system.”

Backwashing occurs every 25 minutes and takes 45 seconds, according to Folen. “Backwash water, which is UF permeate, forces water in the reverse direction from the outside of the fiber to the inside,” he said. “Two trains can be backwashed simultaneously. The feed-pump system is set to a common pressure on the upstream end. Each unit does throttling and flow control depending on how dirty each unit is.”

For post-treatment, fluoride, chlorine, ammonia, and polyphosphate (for corrosion control) will be added.

Security
The plant will be constructed to meet the sometimes conflicting objectives of maintaining security while being accommodating to visitors. “With ultrafiltration a new technology, there will be a lot of people wanting to know about it,” said Folen, adding that they expect visitors from around the world. The facility will have a meeting room as well as displays of an ultrafiltration module and a teaching/learning area for tours. Closed-circuit cameras and televisions will also be available.

“For security reasons, we don’t want visitors to see the complete layout,” said Kramer. “If they want to see what the chemical storage room looks like, we bring it up on the screen. They can look through windows to see the plant, but we don’t want them to see the configuration.”