Subscribe to The Waterline newsletter. An e-mail notice is sent out each quarter when a new edition is posted to the web site.

Water Towers: New, Old, and Both 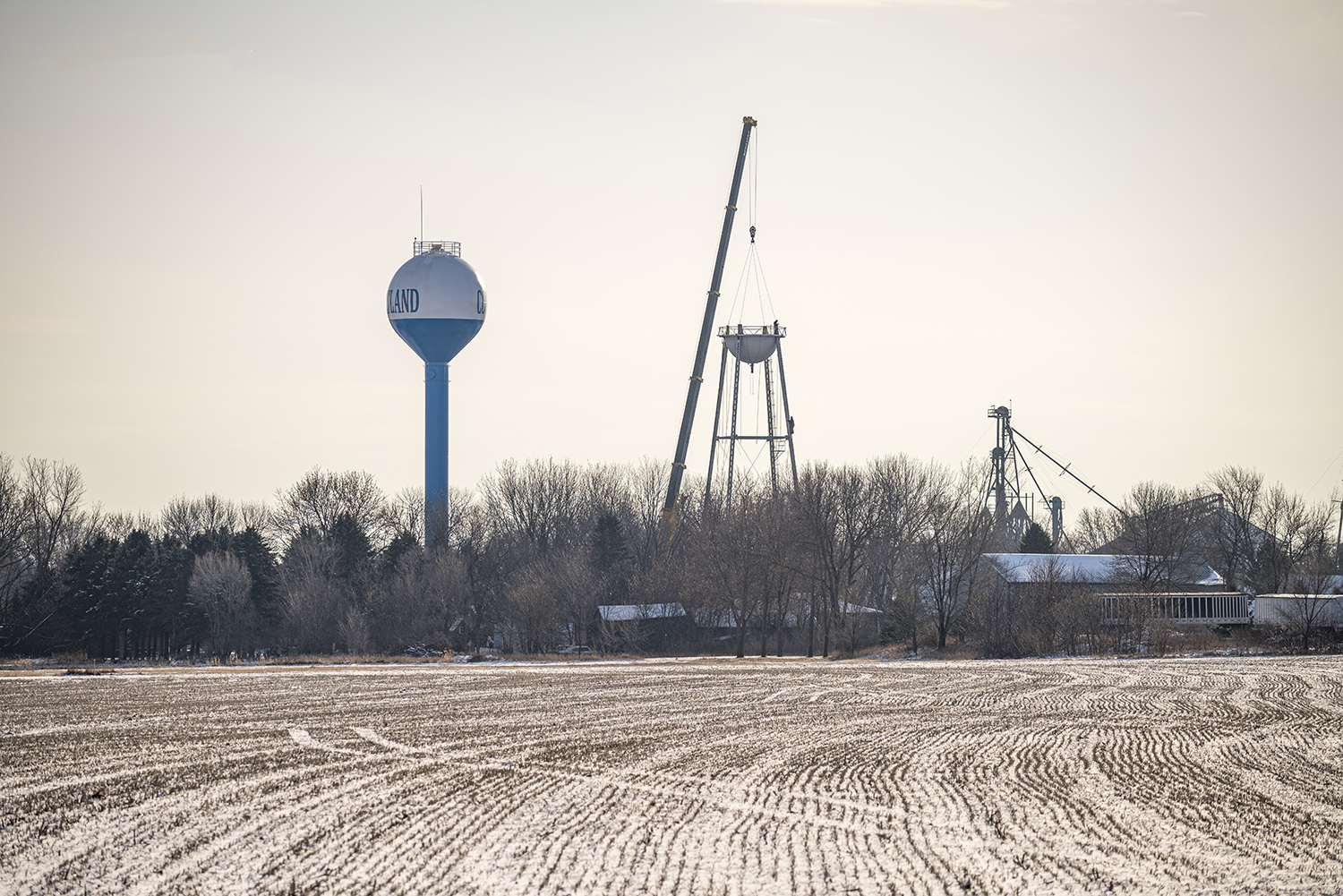 The west-central Minnesota city of Courtland recently replaced its water tower, an event commemorated by some scenic photos: the one above is by Mathew D. Sparlin Photography of New Ulm and the one below by Tiffany Hoffmann of the city of Courtland. 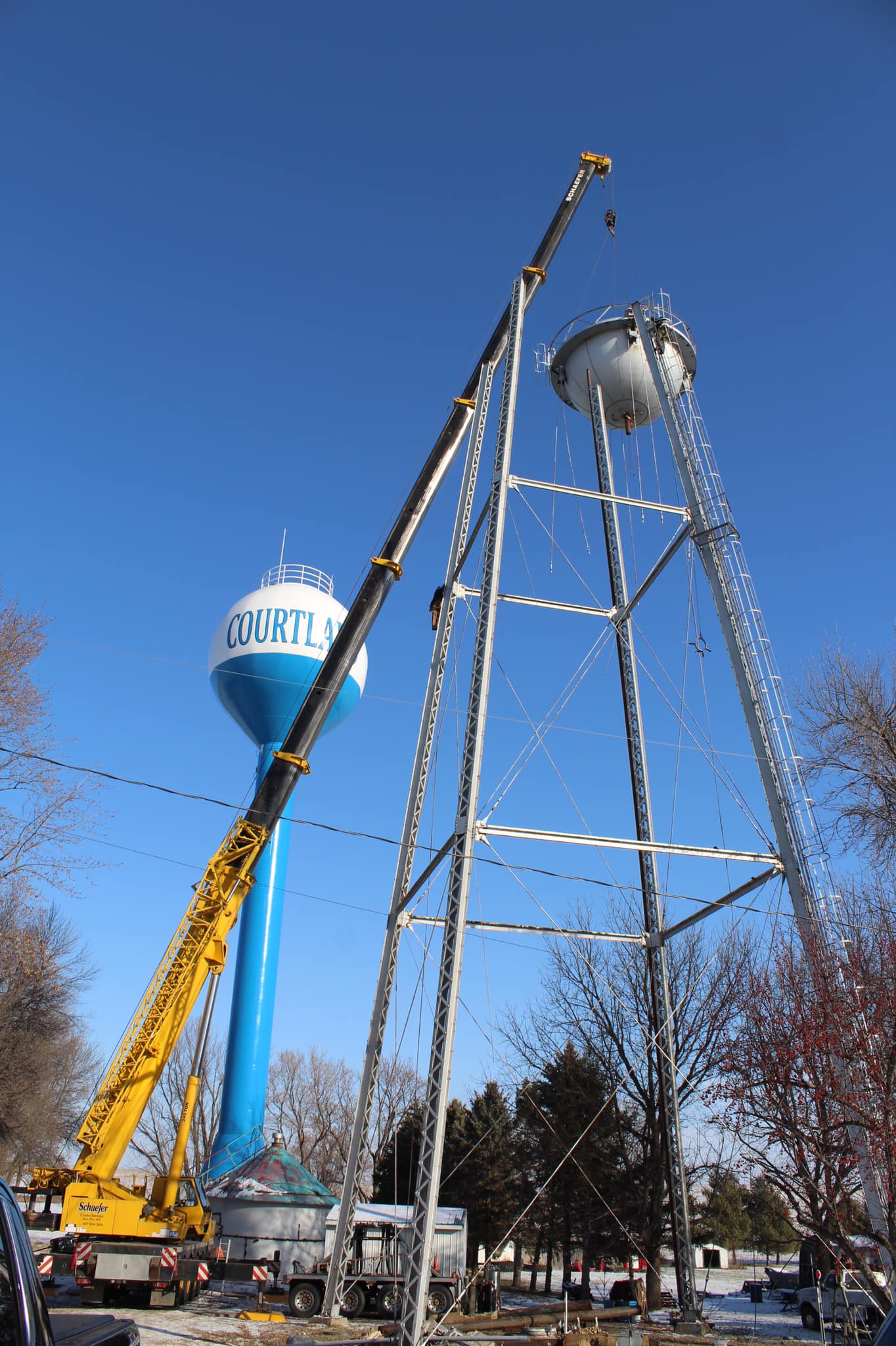 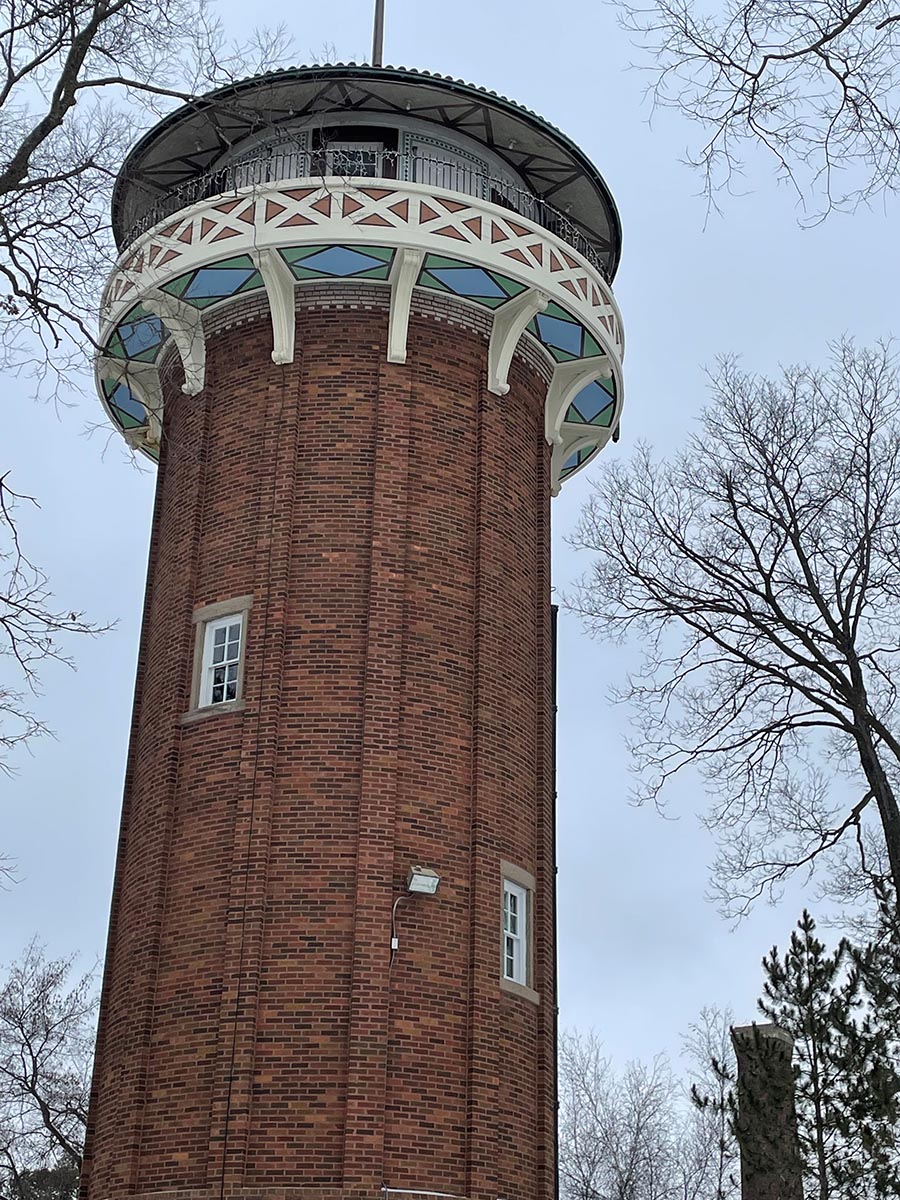 Another notable tower (left), which once held more than 24,000 gallons of water, has been spruced up in recent years. It was the namesake of Tower View Estate, the home of Alexander Pierce Anderson on U. S. Hwy. 61 in Burnside Township, which was annexed by Red Wing in the 1970s. Anderson is best remembered as the creator of the process for puffing cereal grains. In 1901, Anderson was able to heat corn starch to a temperature high enough to cause it to explode, thus turning the expanded starch granules into a porous puffed mass. He started the Anderson Puffed Rice Company and eventually received 25 patents for the puffing process and the machinery used in the manufacturing process. Anderson was self-sufficient (or, in today’s lingo, “off the grid”) on his estate, which contained his home, a farm, a research center, and the water tower. Anderson died in 1943, and the property has gone through different owners. It became the home of Central Research Laboratories in the 1940s and later a campus for Red Wing Vocational Technical College, which established an energy education center on the grounds.

In 1995, the site became the Anderson Center for Interdisciplinary Studies at Tower View, a center that supports artists through residency programs. “It’s for arts and ideas and how they intersect with other disciplines, such as science,” said Stephanie Rogers, the center’s executive director, who added that their objectives line up with A. P. Anderson’s values.

The tower, which hasn’t held water since the 1970s, is one of eight buildings on the estate listed on the National Register of Historic Places. In need of repairs, the tower underwent a five-year restoration project that began in 2016. The work—which included replacing concrete, rebuilding the circular balcony, and repainting—had to follow historic specifications. Another challenge was dealing with a 115-foot-high structure. “When working that high,” notes Rogers, “everything becomes more complicated.”

The balcony serves as an observation deck and surrounds the Tea Room, which is used for special events and as a studio for artists in residence. The restoration work was partially funded by the Minnesota Historical Society through the 2008 Minnesota Clean Water, Land and Legacy Amendment. 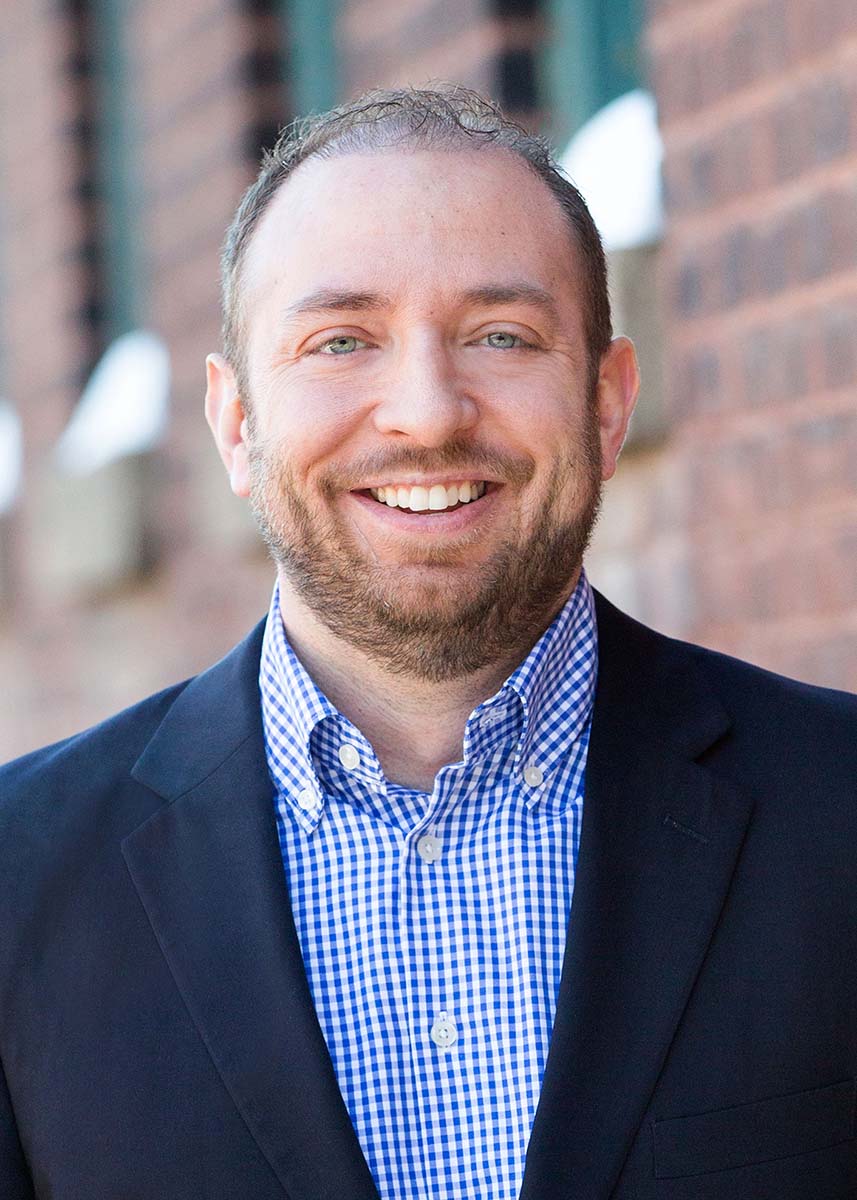 The Metro Water Operators School is back after a two-year absence because of COVID-19. It will be at the Earle Brown Heritage Center in Brooklyn Center from Tuesday, April 5 to Thursday, April 7, 2022.

The keynote speaker the opening morning will be John Kriesel (pictured at right), who is a former member of the Minnesota House of Representatives and currently a motivational speaker, author, and part-time personality on KFAN Radio. In 2006 Kriesel lost his legs in Iraq when an improvised explosive device detonated. He was at Walter Reed Army Medical Center for nine months and will share his stories and lessons with the water operators April 5. He is the author of the book, Still Standing: The Story of SSG John Kriesel, which will be available for purchase at the school.
Classes will cover half-day sessions on distribution, treatment, leadership, regulatory issues, operations, and emerging technologies.

The breakfast and lunch on Wednesday, April 6 will include speakers on the topics of an update on commercial driver’s licenses and on diversity and inclusion.

A study class for those taking the exams for Class C and D licenses will be Wednesday with exams for all classes on Thursday morning, April 7.

Registration information for all schools

Blast from the Past: Waterline Roots

Did you know . . . the Minnesota Department of Health's Waterline newsletter is almost as old as Tom Brady, who, like the Waterline, is still going strong? Above is the masthead from the first Waterline, which was edited by the incomparable Gunilla Montgomery. All Waterlines from 1978 to the present are in PDF format and available upon request. Those wishing to peruse past issues may contact Stew Thornley, stew.thornley@state.mn.us.

On December 16, 2021 a joint advisory was issued on Russian state-sponsored cyberoperations against critical infrastructure, including U. S. water and wastewater facilities and operations. The advisory was from the Federal Bureau of Investigation, National Security Agency, and the Cybersecurity and Infrastructure Security Agency (CISA). The groups stated that, “due to persistent cyber-threats from sophisticated actors, including nation-states and their proxies, critical infrastructure owners and operators should immediately strengthen their computer network defenses.”

In conjunction with the advisory, the U. S. Environmental Protection Agency (EPA) and the Water Information Sharing and Analysis Center (ISAC) held a series of webinars for water professionals. The webinars covered ways hackers gain initial access and exploit known vulnerabilities, such as patches that are available but not yet installed. “Russia knows we’re terrible at patching,” said Michael Arceneaux of ISAC. (See https://tinyurl.com/2p8useyw for a rundown of known exploited vulnerabilities.)

Want a scary story? Read The President Is Missing by James Patterson and Bill Clinton for an eye-opening look at the possible magnitude of a cyberattack.

The LCRR requires public water systems to identify and make public the locations of lead service lines by developing lead service line (LSL) inventories by October 16, 2024 (and the current LCR will be in effect until then). It is also establishing a trigger level of 10 parts per billion (the lead action level is 15 ppb) that requires systems that already have corrosion control to re-optimize their treatment and for systems without corrosion control to conduct a corrosion control study to identify the best treatment approach. The Minnesota Department of Health (MDH), which has seen few exceedances of the lead action level in recent years, plans to reach out to systems that have approaching 10 ppb to help head off exceedances.

The LCRR also mandates testing in schools and child-care facilities served by community water systems. Minnesota has already had a program in place that addresses schools.

The Minnesota Rural Water Association (MRWA) also provides assistance for water systems. John Nelson is MRWA’s technical advisor for lead and copper (and is known as the “boots-on-the-ground guy”). Along with MDH district engineers, Nelson will advise systems, especially with their communication with schools that receive water from a public water system. “Schools need to understand how they use water and their plumbing,” said Nelson, who outlined some of the challenges that schools face. They include mixed plumbing materials from new and old plumbing, the grounding of electric circuits to plumbing, irregular water usages because of vacations and long weekends, and the lack of a building management plan for water.

Money Available
With the recent passing of the Infrastructure Investment and Jobs Act, a large influx of federal dollars will be coming to Minnesota for lead service line replacement. All LSL replacement funding will be channeled through the Drinking Water Revolving Fund (DWRF). Currently, grant funds are available for replacement of the privately-owned portion of an LSL. State legislative changes are being proposed to allow the grant funds to be used for LSL replacements regardless of ownership. As of now, the federal dollars would be limited to a 49 percent grant and 51 percent below-market-rate loan through DWRF. Public water systems need to apply for the funds and can determine how they want to structure the funding package for their customers. Property owners cannot directly apply for funding. The application deadline for DWRF is May 6, 2022. More details about how to apply: Drinking Water Revolving Fund Project Priority List

Lead Service Line inventories are public information and will be required to be in Consumer Confidence Reports. Systems serving populations of greater than 50,000 will also have to make the information available on-line. A good resource for this and other data on is the the
Minnesota Infrastructure Stress Transparency Tool.

In other lead news, the Biden administration announced a Lead Pipe and Paint Action Plan, which outlines initiatives among federal agencies to reduce lead in water, air, and paint in schools and homes. The actions include collaboration with local, state, and federal partners to accelerate the replacement of lead pipes over the next decade; the EPA launching a new regulatory process to protect communities from lead in drinking water; the EPA and Department of Labor establishing regional technical assistance hubs to fast track lead service line removal projects in partnership with labor unions and local water agencies; and the Centers for Disease Control closing gaps in childhood lead testing through the Childhood Lead Poisoning Prevention Program.

Two modules are currently underway, with more planned, in the Water-Wastewater Utilities Treatment and Technology (WUTT) program. WUTT is a series of non-credit water and wastewater modules taught at St. Paul College. Students who complete the modules will be able to get water operator certificates and jobs with water utilities. In addition to full modules for new students and people entering the industry, individual courses within a module are available for existing water-wastewater operators for advanced training and education that could lead to promotional opportunities with their current employers. For more information, contact Carol Kaszynski, carol.kaszynski@ci.stpaul.mn.us.

After a two-year absence because of COVID, the Drinking Water Institute for Educators is set to resume this summer. The Minnesota Department of Health and Minnesota Section of American Water Works Association have been conducting these institutes since 2001. Science teachers from around the state gather and develop action plans to create inquiry-based activities that they can integrate their existing science curriculum. The 2022 Drinking Water Institute will be held from Monday, August 1 to Wednesday, August 3 at the Twin Bluff Water Treatment Facility in Red Wing. A follow-up session at a to-be-determined location will be held in the fall. A special feature of this year’s institute will be a tour of the Anderson Center and its renovated water tower (as featured above).

The Institute is free to Minnesota science teachers, who may receive two college credits for their participation.

St. Paul Regional Water Services Drinking Water: Where It Comes From and How It's Treated

Words to Live By

You can’t be an important and life-changing presence for some people without also being a joke and an embarrassment to others.
—Mark Manson from The Subtle Art of Not Giving a #@%!

Make Your Own Kind of Music.
—Cass Elliot

A real patriot is the fellow who gets a parking ticket and rejoices that the system works.
—Bill Vaughan

Reminder to All Water Operators

When submitting water samples for analyses, remember to do the following:

Notify your Minnesota Department of Health district engineer of any changes to your systems.

If you have questions, call the Minnesota Department of Health contact on the back of all sample instruction forms.

Operator training sponsored by the Minnesota Department of Health and the Minnesota AWWA will be held in several locations this spring.

Register for schools and pay on-line: